A brief comparison of some World Bank economic indicators of Bangladesh, India and Pakistan 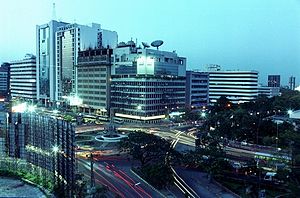 South Asia is one of the fastest growing regions of the world and is home to one-fifth of the global population. India, Pakistan and Bangladesh, the three largest economies of the region, hold the key to lifting several millions out of the vicious poverty cycle into economic prosperity. Although traditionally India and Pakistan generated the most interest around the globe, Bangladesh has come into the spot-light over the past decade with drastically improving social indicators and a growth rate of around 6 % throughout the financial crisis and global recession.
So how has the Bangladeshi economy performed over the past decade compared to the Indian and Pakistani economies?
This article will primarily focus on comparing the trends of some of the economic indicators of the three largest South Asian countries over the past 10 years.
The simplest measure of economic well-being of a country is its GDP per capita which is a measure of the value of total goods and services produced in a country divided by the total population. From the graph below, one can see that all three nations have more than doubled their GDP per capita with India and Pakistan bringing larger absolute increase compared to Bangladesh. Sadly,  Bangladesh continues to remain poorer than India and Pakistan with the gap increasing over the decade and the gaps in absolute terms have more than doubled with India and Pakistan.

A much more dynamic performance of the economy can be seen from observing the trend in the economic growth rate of the three nations. The Bangladeshi economy maintained a near constant growth rate of around 6 % throughout the decade compared to the large gyrations in growth rate of India and Pakistan and it managed to do so throughout the global financial crisis of 2008-12. Even though the Indian economy attained a much higher growth rate for most of the decade, it experienced a drastic slowdown twice, something that the Bangladeshi economy avoided entirely throughout the decade despite political turmoil, natural disasters, etc. It was almost immune to global and regional slowdown over the decade. This is a sign of a robust economy in the making if Bangladesh can improve its governance and curb political turmoil, which is certainly holding back the country from attaining  even higher growth rates.

High inflation has been one problem that all three countries had to deal with throughout the decade as can be seen from the graph below. Pakistan was by far, the worst performer in this indicator throughout the second half of the decade with growing political turmoil in the country leading to a collapsing rupee caused by fall in FDI and rise in capital flight. However, inflation rates of around 5-6 % is mostly considered normal in fast growing emerging economies. Inflation in Bangladesh spiked in 2009-11 as the government became dependent on rental power plants to increase power production in the nation which made the country consume more oil than usual. Domestic natural gas price was also on the rise with growing national demand. On top of that, commodity prices were on the rise in global markets between 2010-12.  Besides, the country was plagued, throughout the decade, with syndicates which tended to hoard supplies to keep the price of essentials higher than usual. Thus, at the turn of the new decade, the Bangladesh government has a lot to do to bring down price levels by curbing market syndicate activities, focusing on good crop harvest and making the country less reliant on rental power plants by exploiting coal-fired powered stations. Besides, global commodity prices are also falling recently which will further help Bangladesh, India and Pakistan to lower inflation.

Long term growth potential in an economy can usually be seen from gross savings ( % of GDP).  Gross savings is gross national income and net transfers less total consumption in the economy. Saving in an economy is important as it in turn provides internal fund for borrowing and investment in the economy. Bangladesh did manage to attain the highest gross savings as a proportion of GDP by 2011. It saved over 30 cents for every $ 1 of goods and services produced from year to year since 2003. This broadly shows that the country has a large potential to bring about significant investment from its own fund just like India and  unlike Pakistan which saw a drastic fall in gross savings over the decade.

However, capital formation has been rather sluggish in Bangladesh despite growth in savings. Gross capital formation (Gross domestic investment) as a proportion of GDP remained constant at 25 % throughout the decade unlike India which increased it significantly. This shows that, in general, Bangladesh has been building less infrastructure and investing less in industries than it can, something that the government needs to take look into account. Part of the story behind growing gap in GDP per capita with India can be explained by this shortfall in increasing the Gross capital formation as a percentage of GDP. It is also one of the main reason why productivity is still low in Bangladesh as GDP per capita remains low despite having higher labor participation rate compared to India and Pakistan. This ratio will certainly rise with improving political situation which will encourage investment from domestic investors. Besides, the government should reduce red tape in the country which will increase the pace of public project completion throughout the country which will further increase Bangladesh’s growth rate. With higher gross domestic investment as a proportion of GDP, we will create employment at a faster rate for both skilled and unskilled workforce.

Bangladesh has certainly performed well in exports. Export, as a proportion of GDP, has increased consistently and significantly over the decade like  India. The nation’s RMG sector has to be particularly thanked for this development. Since 2010, export as a proportion of GDP increased  by over 6 %, showing growing importance of export in propping up the country’s consistent growth rate throughout the decade.

Bangladesh, has also, performed well in terms of keeping national debt low. It shows that debt repayment per year is less than 10 % of total income from abroad from exporting goods, services and remittances. This shows that the country is borrowing well within its capacity and has no worries of defaulting on any payment. Moreover, this shows that the country has enough income to finance import of machinery, equipment and other capital goods to increase productivity of the economy.

Official development assistance per head of the population has remained less than USD 10 throughout the year. With growing GDP per capita, it shows significant reduction of reliance on foreign aid over the past decade unlike Pakistan which saw trebling of aid per head.

Moreover, Bangladesh has shown overall sound fiscal policy over the decade compared to India as it tended to have a much smaller deficit as a proportion of GDP compared to its South Asian big brothers. However, this partly portrays the problem of not properly implementing the budget proposed from year to year as implementation rate stands at about 70 % which partly explains the lower gross capital formation as a % of GDP. Nevertheless, it is commendable to see that the nation keeping its budget deficit to a very small proportion of GDP at a time when many developing countries are caught spending more than they can afford.

Even though, there are several other indicators that could be compared, one can safely conclude that our economy has done decently well despite being much poorer than India and Pakistan at the turn of the decade. However, Bangladesh is still lagging behind India and Pakistan in terms of labor productivity but with sound fiscal policies, higher savings ratio, improved gross capital formation, and improved governance, Bangladesh can certainly catch up in the coming decade as both India and Pakistan are struggling with lower growth rates in recent times. Domestic and foreign investment and improved governance will hold the key to development in the near future. The trend over the past decade certainly tells us to be hopeful about the economy in the coming years.