Inequality and poverty in Bangladesh – What do the numbers tell us? 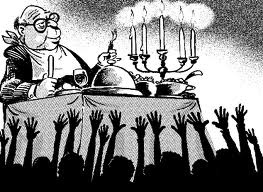 Let us begin with the GINI index, a measure used to roughly show inequality in income distribution in an economy. A value of 100 indicates very high income inequality while a value of 0 indicates perfect income equality. Bangladesh, at present, has a value of 32.1. The index holds very little information in itself unless we look at the trend. The graph below indicates that Bangladesh has seen an increase in inequality since early 1990s. However, the inequality remained broadly the same since mid 1990s with a value of around 32.

A more clear picture of wealth distribution can be obtained by dividing the population into 5 halves – from the poorest 20 % to the richest 20 %.

The trend here also shows that inequality increased around early 1990s with the wealthiest 20 %  having an increase in share of income held by about 4 percentage points, but inequality remained the same ever since.

This plot in turn magnifies the growth in inequality showing that the wealth distribution between the poorest 10 % and the richest 10 %. The trend of increasing inequality is also present here, but it gives us an interesting insight. The increase in income share held by the richest 20 % seen in the previous plot actually all went mostly to the richest 10 %.
Due to unavailability of data, we cannot magnify further into this richest 10 % but it can safely be assumed that the rough increase in share of income held all went to the richest 1 % of the population. It is very likely that the richest 1 % of the population currently receives about 13 % of the national income.
In other words, if an average person from the lowest 10 % of the population earns Tk 2400, an average person from the richest 1 % earns Tk 78,000.
However, the gravity of the problem of growing income inequality becomes even more serious when we take wealth accumulation into account. About 75 % of the population live under USD 2 a day (at PPP). This indicates that they hardly ever save to bring about significant wealth accumulation compared to the richest 1 % which holds a significant proportion of the national wealth and continues to accumulate more over time as they can make a handsome saving. Hence, the actual inequality is much more worse once existing wealth owned and prospect of future wealth accumulation are taken into account.
What about poverty? Are we seeing a fall in poverty with our near constant 6 % economic growth?

The answer is we are. Poverty is falling, albeit at a really slow pace as can be seen from the plots below.

Currently, 76.5 % of the population live below USD 2 a day (at PPP) poverty line down from 93 % back in early 1990s. About 43.3 % of the population live  below USD 1.25 a day (at PPP) down from 70.2 % in early 1990s. From this numbers, we can estimate that poverty is falling at a really slow rate of about 1 % annually despite the healthy economic growth. Very little of the growth is actually going to the people that needs it the most.
To conclude, the numbers are certainly confirming the common worry – the gap between the rich and poor is increasing and poverty is decreasing at an agonizingly slow rate. A lot needs to be done in the years to come to make sure that the fruits of economic growth go down to those who need it the most.