A young man and his country 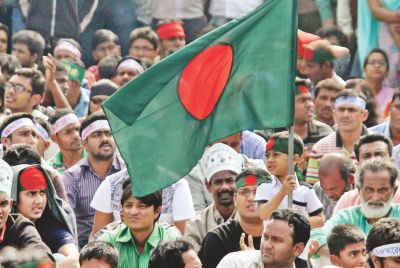 Another week of self-destructive politics. A demonstration of unnecessary bloodbath. Abrupt ends to young lives; on the verge of taking on this world. All for the power trip of 2 ladies and the hordes of Yes-Man they surround themselves with. A new week beckons but I do not have much optimism to think it will be any different from the previous week. The question is what can I do? Or my friends and the people I know who are more competent and passionate than me about the welfare of our country do? What can we do to prevent our nation from being the farce it has been reduced to in the last few months. All of us have opinions but who is willing to take that first bullet? Do we have the sustained strength within ourselves to bring about positive changes in the society or will we be content on merely commentating from the sidelines?
They say educated people cannot
a) join politics
b) remain clean in that corrupt environment.

In this context, let me share a personal story. One of my uncle is a prominent politician. Even by his political foes, he is considered to be honest and principled; attributes which are not necessarily useful in the current political spectrum. In the last general election when every Tom, Dick & Harry of the ruling party won in their constituencies, my uncle could not. He was unable to make the dirty deals that are expected of a politician in our country.
So what do we infer from this example? That good educated people should not join politics? I hope that is not the message that I am conveying through this example. Like any other change that needs to be cemented there is a need for critical mass of sincere people to join politics. Simultaneously there is a greater need for the voting population to become increasingly educated so that they can make informed and logical voting decisions. I dream of a Bangladesh where MPs of a political party can vote against their party lines and there won’t be any constitutional restrictions barring them from such actions. I aspire of a political hierarchy which will be based on meritocracy rather than a politician’s degree of association to a Sheikh or a Zia. I wish for a democracy where the key performance indicator for the opposition party will not be the number of lives that were claimed during its demonstrations but rather passionate debates over policy and collaboration with the government to design effective legislation. All these changes will take time; they certainly won’t happen overnight. But till then we need the example of the brave pioneers. Just like my uncle, there will be more cases of crash and burns but even these stories will inspire other journeys to take off.
But the question still remains what can I, my friends or my generation do in the meantime. It is obvious that the current generation of ruling elites, which is a few generation above us, have failed all of us severely. They have let their individual greed to run amok and have created havoc in the society. But even they have provided us with valuable lessons of what not to do when you are in positions of power. The time for my generation will also come and when that time comes we cannot falter neither shirk from our responsibilities. But till then we need to focus on our personal battles and leave our marks in this world. Around all of us there are incredibly inspiring journeys of young people dreaming big and realizing their dreams. These stories range from Manik in Rangpur who aspires to join the BCS cadres, Zahedul who has left the security of his bank job and delved into entrepreneurship, Deeba who is perusing her religious duties against social odds, Abir who is challenging himself to get admitted in the one of the most globally prestigious educational institutes, Nishita in USA who is doing multiple jobs to finance her education to Zeeshan who is making a foray into the dark world of politics. Numerous stories of such inspiring individuals are all around us.
We need to bide our time but at the same time be aware that the shortfalls that tainted our predecessors do not come back to haunt us. If we fall for the same trap of individual greed we would be no better than the politicians who are derailing the nation today. And future generations will regard us with the same contempt that we have reserved for the current one in the helm. We need to be prepared so that when the opportunity comes we can serve, without any fear and to the best of our abilities, the country that we all love and owe so much to. Today we are angry and helpless and we do not have any enough light yet to wade of the darkness. But tomorrow will be different. Tomorrow all these coming-of-age stories will culminate together and create that bright glow that will engulf us, In shaa Allah.

A Development practitioner by job. A dreamer by nature. I love to watch movies, hangout with friends, travel around the country and stare blankly. My pet topics are history, politics and sports. An optimist and pessimist in equal measures, I am yet to find my stamp on life.