Bangladesh’s annual economic growth of 7% calls for the scalability of its power infrastructure to keep up with the demands of industry and increased urbanization. Heavy investment in energy infrastructure through PPP projects have increased power generation; however by 2030, Bangladesh’s demand may well reach 34,000 MW (Source: PSMP 2010). Meeting this increase will result in a multi-billion dollar opportunity for business. 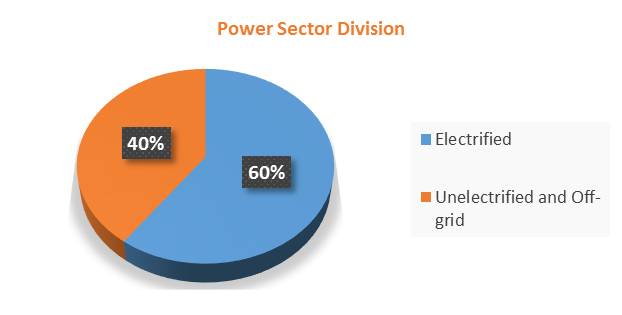 Bangladesh has a population size of 160 million out of which, only 90 million people are served with grid electricity.  Assuming around 5 members per household, the 2.25 Solar Home Systems (SHS) installed till date will serve around 10 million people. That still leaves another 60 million people, or, 12 million households, without any access to electricity. Keeping in mind the possible grid expansion, SHS expansion might serve another 7 million households in the coming years, there is still a market of 5 million households that will be without electricity in the foreseeable future.
The current demand in the country is around 6,264 MW which is higher than the supply. Demand for electricity goes hand in hand with income. The figure shows an increasing trend in GDP (higher living standards) which leads to an increase in demand for electricity.  As a result, the power industry definitely needs overhauling which can positively impact all components across the vertical production chain. This presents ample opportunity for investment in areas ranging from electricity generation to distribution channels in the fuel sourcing function. 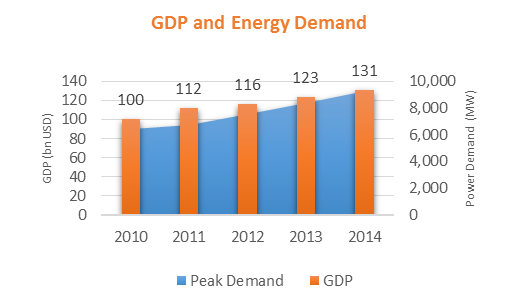 According to the current fuel mix, natural gas is the primary energy source for electricity (78%), whereas furnace oil accounts for 14.6% of fuel input in electricity generation. Coal, hydro, and diesel account for 3%, 2.3%, and 2% respectively in the fuel mix of FY2013. Shortage of gas shows the importance of an alternative source of energy in Bangladesh. Here renewable energy comes into action. 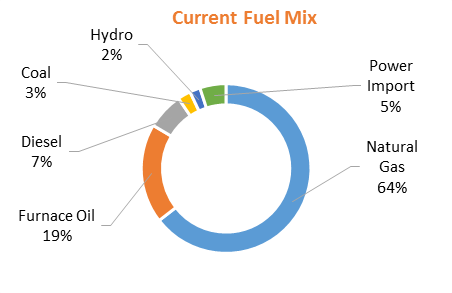 Solar energy is the most prominent source of renewable energy source in Bangladesh. The country has successfully managed to implement one of the biggest Solar Home System (SHS) projects. Almost 3 mn SHSs have been installed to date with a targeted installation base of 6 mn by 2015. Currently renewable energy makes up 2.5% of the total electricity generation.
Hydro power has an estimated maximum capacity of 500 MW. Micro, mini, and pico hydro power plants may be used to serve the needs of remote and hilly areas. The target of 3 million Solar Home Systems (SHSs) by 2015 has been doubled to 6 million units showing praiseworthy developments in installation of SHSs. However 60 million people do not have access to any electricity. Therefore the country can benefit from solar lanterns, pico, and nano solar PV homes and grid systems to extend electricity for lighting and other similar purposes in remote areas. In addition, 8.6 million m3 of biogas, potential to produce 300 MW of electricity from rice husk, and 350 MW from cattle waste based biogas power plants are also available.

We have seen why we need to move towards the use of renewable energy, whether it be now or in the future. However, at some point we will no longer have this option. Whether it’s our generation or future ones, nonrenewable energy sources will be left behind at some point. So the question is whether our society wants to transition away from such sources on its own terms or be forced into it by desperate necessity sometime in the future.Source: Ministry of Power, energy & Mineral Resources (2012-13)