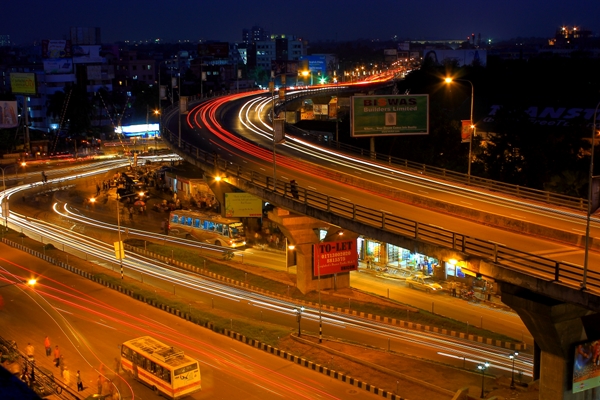 This report was updated for 2016. You can read it here.

The cement industry was traditionally import driven with 95% of country’s cement imported from Indonesia, Japan, Indonesia, South Korea and China back in 1960s. However, over the last couple of decades, due to rapid pace of urbanization, industrialization, large-scale infrastructural projects and construction of various commercial and residential buildings, demand for cement has markedly increased.

Currently, the demand for cement stands at 17.5Mn Mt against production capacity of 28MnMt as of 2013. Industry average capacity utilization stands at 75%, although some major players are operating at 100% capacity. During 2009 to 2011 period, demand increased at a slower pace mainly due to slowing down of urbanization and lower investments in infrastructure projects.

Currently, the market size of this industry is USD 1.74 bn (2013). The market is oligopolistic in nature with top ten players controlling up to 85% of market share. There are total 112 players registered out of which 45 players are operating. 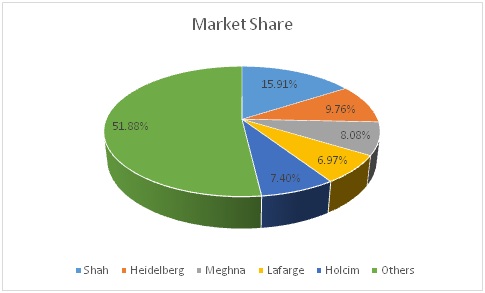 In addition, the industry is regional and seasonal in nature. The demand for cement is highest during winter as the season is the most favorable for construction.  On the other hand, during the rainy season the demand falls drastically as the wet condition is not favorable for construction. In terms of factory location, most of the industries are situated in clusters outside the big cities as they want to remain close to the places where the demand for cement is high due to urbanization and high transportation costs. Also, the factories tend to locate near places with good water source as water is an important ingredient for cement production. 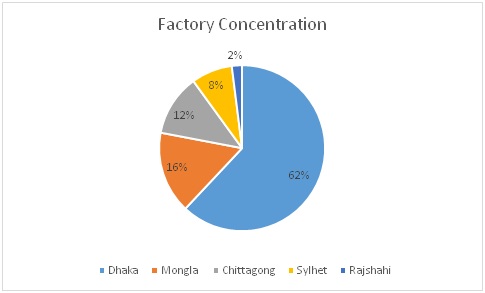 Till date, two types of cements are available in the country. Portland cement constitute the bulk of production (95%), while Portland composite cement (5%) sums up the rest.

The cement industry requires various types of raw materials for producing cement. These include clinker, gypsum, slag, fly ash and limestone. Due to lack of raw materials in Bangladesh, many cement factories have to rely solely on import.Almost all the raw materials have to be imported from countries like Thailand, Malaysia, Philippines, Vietnam, India and China. Among the major players, only Lafarge produces its own clinkers. The company has 17km cross border conveyor that carries limestone and shale from Meghalaya in India to Lafarge Surma plant that is located about 270 km from Dhaka in Chattak, Sylhet. The country has become one of the largest importer of clinker and limestone. The total amount of clinker imported till date stands at US504 million as of 2012. 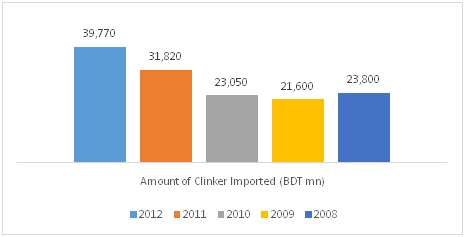 Apart from the local market, players have started exporting to India. Bangladesh is currently exporting up to 15 000 – 20 000 tons of cement per month to India. (Source: Bangladesh Bank).In the long run, industry leaders see a great prospect in entering both the African and Middle Eastern markets.

Based on industry experts, demand is expected to grow at an average of 20% to 25% for the next 5 years. Each year, the government is allocating funds for infrastructure development under ADP.  Over the last five years, government’s allocation of funds on bridge and road division is increasing. Recently, the government has undertaken a number of large infrastructure projects on bridges, airports, flyovers and monorail.

Future Prospects
For a developing country like Bangladesh, cement industry has a lucrative future. The government is looking to invest further in infrastructure while encouraging FDI in secondary sector. In addition, the standard of living of the population is increasing giving rise to demand for Real Estate.
Most cement factories are currentlyoperating below their full capacity. Since demand of cement is positively correlated to GDP growth and with rising growth forecasts, demand for construction materials like cement is set to increase further in the coming years.
Report prepared by Nazmus Shadat.