The global Mobile handset market, in recent times, has been influenced by the rise in demand for smartphones. This trend has slowly crept into the Bangladeshi market, as the users make the leap from the old flip-phones to smartphones.
Industry Background: Status Quo:
The mobile handset industry in Bangladesh has traditionally been dominated by the Finnish giant Nokia due to its low cost feature phones. This preference for inexpensive alternatives has kept buyers away from industry giants like Samsung. Today, it is a non-collusive oligopoly with local brands like Symphony dominating the market. They have successfully competed with international giants like Samsung and Nokia (which still closely follow suit.)
A survey by LightCastle on a random sample of different age groups of mobile phone users in Dhaka, based on their preferred operating systems, can be seen below. 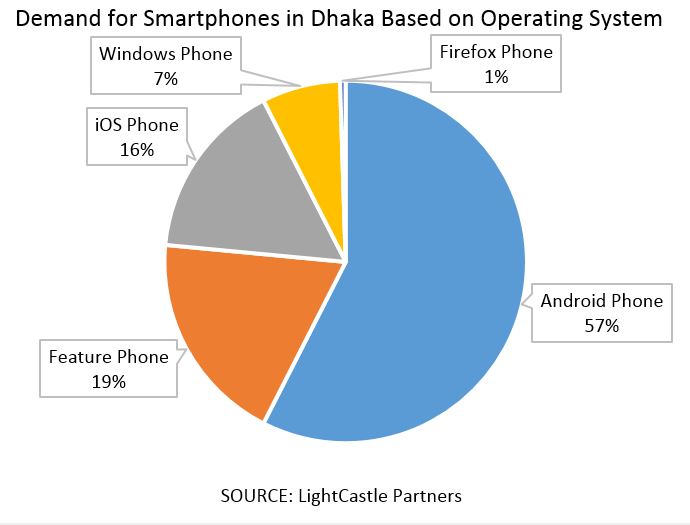 The following pie chart shows the demand data for smartphones in the current Bangladesh market based on the brand: 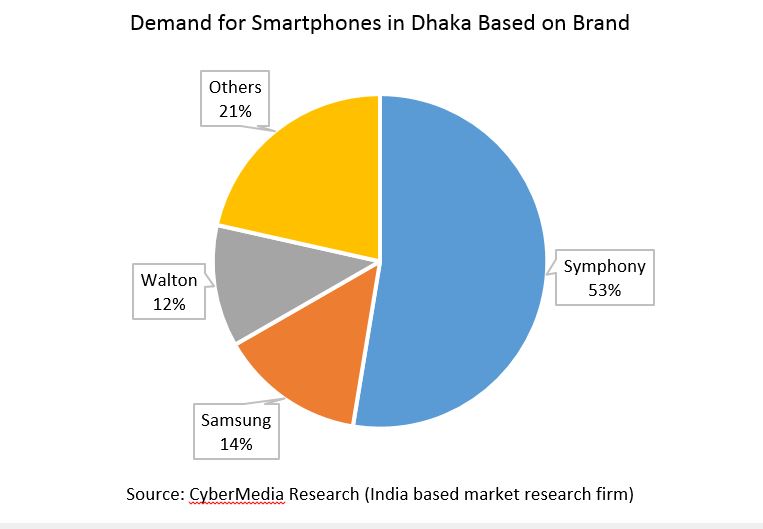 The above data shows that the key players in the market are Symphony, Walton, and Samsung, with Symphony being the leader in terms of market share.
Growth and Capacity:
As of now, the growth in the smartphone sales in Bangladesh, especially, Dhaka, is much higher than the global average of 20.3%, according to high officials from Samsung. The following factors have attributed to the growth in this sector:

According to BTRC, the number of GSM subscribers in Bangladesh has gone up by 34% in the past year and has reached 119.62 million this November.  This is not surprising, given that Bangladesh is trying to elevate its status from a low to middle income nation. The burgeoning upper middle-class segment, coupled with the existing young and dynamic labor force, is driving the shift in demand from feature phones to smartphones. Despite of this, there is room for growth in the market. According to a GSMA report, only 67.1 million people, amongst the potential 160 million, are unique subscribers.
Prices:

The list of phones above has one commonality, similar specifications, and one difference, price variance. Most smartphone prices have followed a downward trend, with brands such as Walton and Symphony trimming down costs of production to maintain a competitive edge over the well-known names.
According to the sales people, Walton phones, within the range of BDT 6000 -BDT 14000 are very popular. Although, brand loyalty has generated growing demand for Apple and Samsung products, the exorbitant prices have often stunted their sales potential. The marketing campaigns, undertaken by Symphony and Walton, which appeal to the patriotic sentiments, have also boosted sales. So has the fact that they do not have to share profits with shareholders abroad.
Government Regulations
The proposed budget for the current fiscal year has put the value added tax (VAT) on smartphone imports to 15% and Advanced Income Tax (AIT) to 5%, making the total cost of importing a smartphone subject to a tax of 20%, which is a 5% increase from the incumbent fiscal year’s regulations. This is highly problematic for manufacturers like Samsung and LG. The rise in the rates gives a competitive edge to manufacturers like Walton which assembles and manufactures locally.
Neighbor Dynamics
The dynamics in the much larger Indian economy has been similar to the Bangladeshi market. With tax rates on imports being higher in India (close to 25% -30%), depending on the country of import, local brands like Micromax and Karbonn, along with countless smaller brands, have dominated the market. Despite the strong regulations, Korean giant Samsung has been the biggest player in India, whereas, it is not so in Bangladesh. This may be due to the difference in income and the existence of brand loyalty.
What the future holds
The growth in demands in recent years suggest that the prospect for smartphones in Bangladesh is very high. The influx of more advanced services, provided by the GSM operators, have played a phenomenal role in the growth of the smartphone market. Despite the existence of an oligopoly in the market structure, the local brands are favored, owing to government tax regulations. Thus, there still remains a significant amount of space to enter the market locally.
The Research for this sector report was conducted by Zuhayr Reaz.