Bangladesh’s transition as a lower middle income country has been a cause of jubilation for many. Although a number of factors can be attributed to sustained economic growth, some key sectors had a major role in augmenting this transition. Bangladesh’s apparel sector is one of the major success stories which had its humble beginning in early 1980s. The sector has since grown by leaps and bounds with ‘Made in Bangladesh’ apparels spreading across the globe. Currently, the sector is exporting USD25.4 billion worth of apparel as of FY2014-15, accounting for 81% of country’s export and employing 4.2 million workers. The export growth has been impressive, despite sporadic political turmoil in 2013-14 and early 2015, which signifies the sector’s resilience and entrepreneurial spirit of apparel entrepreneurs. 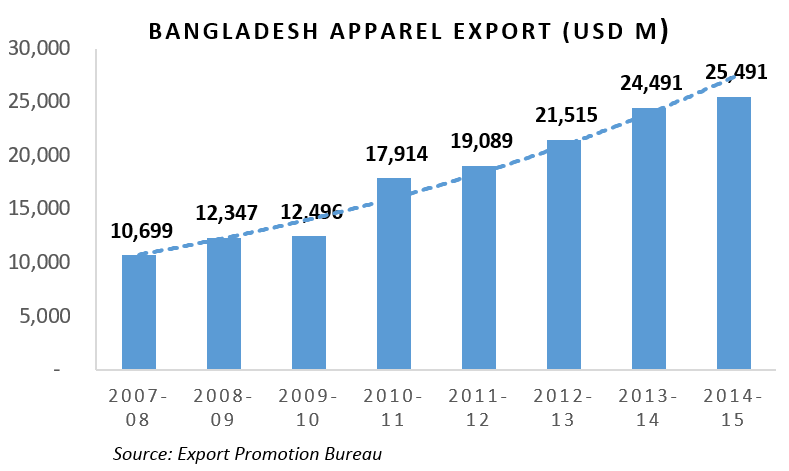 Given this spectacular success, industry leaders and policymakers are bullish about the sector’s prospects. However, considering a number of demand-supply variables, the way forward may hardly be a smooth ride.

Bangladesh is currently the third biggest apparel exporter trailing China and India. The closest competitors are Vietnam and Indonesia.

In the recent past, China has been plagued by rising labor costs and recently by economic slowdown. Alongside, their policymakers have consciously adopted a stance of moving up the value chain, catering to high value apparel demands. This is resulted in influx of apparel orders to smaller competitors; Bangladesh being a major beneficiary. 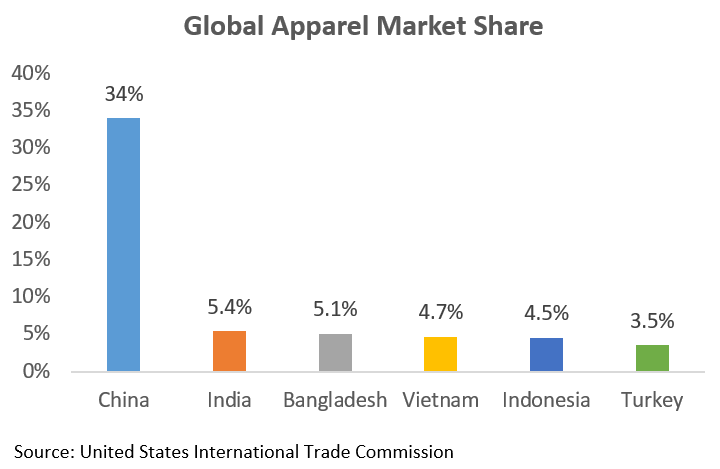 According to Mckinsey studies on Global Apparel market in 2012 and 2015, Chief Procurement Officers (CPOs) of major clothing brands have pinpointed Bangladesh as their top choice as sourcing destinations. With CPOs adopting a ‘China plus one’ policy, Bangladesh’s RMG exports have gathered steam despite series of fatal Industries accidents.

China’s economy has slumped with GDP growth expected to slide below 7% in the coming year. Chinese policymakers have responded by depreciating RMB for making exports more attractive. The trend is set to continue in 2016.
Bangladesh will be directly impacted as Chinese apparels are becoming cheaper. However, since the sector imports RMG accessories and fabric directly from China, Bangladeshi apparel may become more affordable and competitive in the international market.

Chinese are becoming more prosperous with per capita income crossing USD 7,000 in 2014. Bangladesh should not only target shifting apparel orders from China, but also look to capitalize on the growing Chinese middle-class.

Over last three years, several different players have emerged including Myanmar, which returned to the mainstream on the back of recent political reforms. Others are also offering competitive costing with the likes of Cambodia and Vietnam leading the way. The biggest long term threat for Bangladesh are some of the Sub-Saharan African nations with Ethiopia emerging as the major potential challenger. According to the latest Mckinsey report on apparel sector published in 2015, Bangladesh still retains the preferred position for apparel sourcing, but is closely followed by Vietnam, India and Myanmar. Ethiopia became the first African country to make it to the list.

Sub Saharan countries like Ethiopia enjoy number of benefits through—preferential trade agreements (GSP to USA and EU), cheap labor (lower than Bangladesh), surplus electricity, cheap land price, preferential investment terms and proximity to EU and USA. In the next decade, countries like Ethiopia can pose a major challenge in the low value segment of the apparel market. 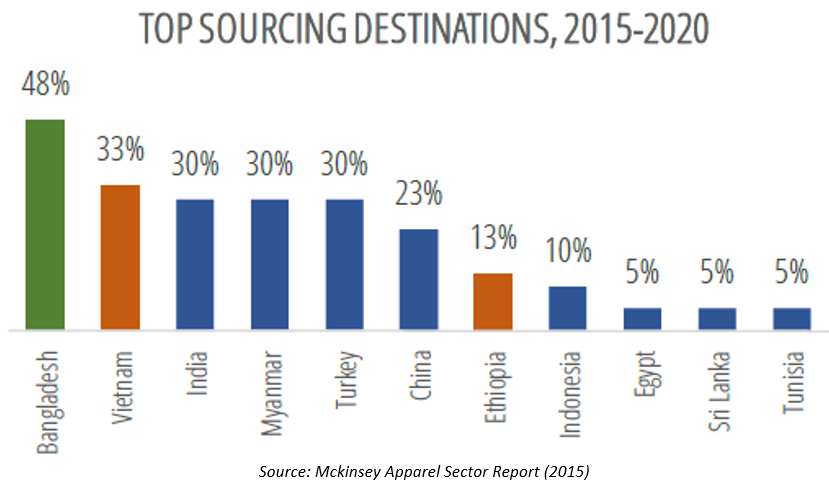 Although Bangladesh is still focused on low value product segment, as cheaper competitors come up, overall supply dynamics will evolve. Bangladesh’s apparel wage rates have been increasing over last couple years and direct costs are expected to rise further. A comparison of monthly average salary of apparel workers shows that Bangladesh’s (USD 68) labor costs are higher compared to Ethiopia (USD 37), but lower than Vietnam (USD 120). As Bangladesh’s labor cost goes up, it will become increasingly difficult to complete in the low value segment.

EU is Bangladesh’s largest RMG export destination constituting 60% of total export followed by US market with export of 21%. Bangladesh has recently diversified into emerging export markets including Australia, Brazil, China, Japan and South Africa accounting for 15% of total export. 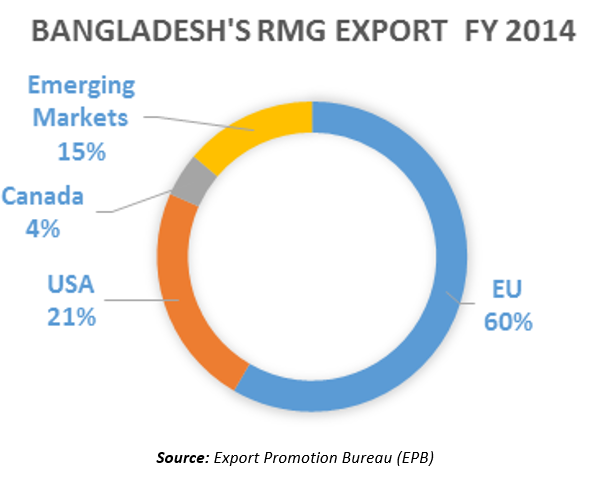 EU has been experiencing economic downturn since global financial crises in 2008. The economic scenario has further dampened due to Greek credit default. Recent political row with Russia and resulting uncertainty over gas supply has further contributed to the doldrum. The recent fall in Euro exchange rate has been due to slowing down of the regional economy. Falling euro has made Bangladeshi apparels more expensive to EU consumers which will result in slower growth. 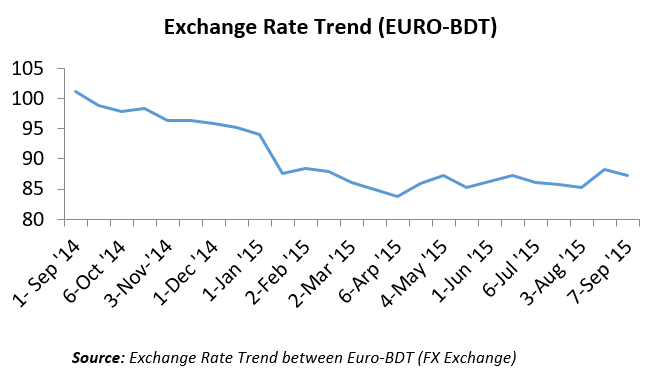 US, the single largest importer of apparel from Bangladesh, has recently cancelled GSP for Bangladesh’s export citing a number of reasons. Although apparel was never part of GSP, BGMEA had been lobbying hard to get tariff free access for apparel. The recent development may have a major dent in ensuring free access of Bangladeshi apparel.

• Align Monetary Policy for currency depreciation: Bangladesh Bank (BB) should look to maintain the currency value and not allow appreciation for the sake of exporters. While government is already offering export incentives, cheaper currency will also be a major boost. Alongside, cheaper currency might also attract FDIs in apparel sector, specifically from China.

• Improve Backward Linkage: Most of the raw material for apparel sector has to be imported from abroad. Although some of the cotton used is sourced locally, for instance, the vast majority of it is sourced abroad, mostly from China. In this regards, manufacturers can consider forward contracting to protect against potential shocks in the global cotton market. Alternatively, manufacturers can explore the option of acquiring lands in Africa to establish cotton plantations in the long run.

• Developing Mid-Tier management: Currently, there is a significant deficit of talented mid-tier managers in the apparel industry. Due to branding issues and low pay compared to other industries such as banks and FMCG, most fresh graduates are reluctant to enter the apparel sector. RMG leaders and the government must work hand in hand to increase the attractiveness of the apparel industry as a place of employment.

• Diplomatic Overtures: Government must aggressively pursue economic diplomacy by mending and strengthening relationship with top importers including US and EU countries. Also, concrete steps need to be taken to develop markets in emerging apparel markets like Japan, Turkey, Brazil, Australia and Canada.

Mckinsey, in their 2012 report, had projected that Bangladesh’s apparel sector export will grow to USD 42 Billion in 2021. Local industry leaders have earmarked USD 50 Billion RMG export target within 2021. All these will become impossible dreams if we fail to build a launching pad for taking the apparel sector to newer heights.