This write-up dives deeper into the demand and supply sides of power consumption and production in the Bangladesh economy. Although Bangladesh has been able to become partially self-sufficient in producing electricity, it still struggles to meet peak demand. The projected peak demand up to 2040 is:

The current power generation capability of respective sources against maximum power demand is: 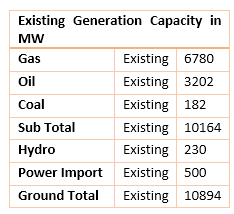 Currently, Bangladesh is overly reliant on its textile industries to spur economic growth and development. However, in order to achieve “Vision 2041” and attain the status of a developed economy within 2041, there is a greater need of diversification in industries. High Value industries such as: Light Engineering, Agro Processing, Pharmaceuticals, Electronics, ICT/Software, Auto Parts and Shipbuilding are potential high value industries identified by the JICA team, which according to them, will help achieve the economic status by 2041.

Greater diversification of industries, if implemented successfully, will add value to the GDP of Bangladesh. The subsequent impact on standard of living will result in greater need for transport from the masses and higher demand for electricity. The following section provides brief overview of the PSMP identifying the current supplies of electricity and providing roadmaps to meet the growing demand of power in the economy, both from residential and industrial sectors.

The predominant source of generating power, Natural gas is not in abundant supply for Bangladesh. The present power generation capacity is 38%, while the international benchmark is 45%. The increase in efficiency can result in additional annual capacity of 1,300 MW.

Where the Supply is coming from?

The following provides a snapshot of the current status of domestic natural gas in Bangladesh:

Bangladesh doesn’t have an abundance of natural gas available from domestic sources, therefore, it is imperative that efficient policy development and technological advancement takes place in order to ensure maximum efficiency.

Introduction of International Oil Corporations (IOCs) for both offshore and onshore development. The focus should be on amendment of the Production Sharing Contract (PSC) which would attract large scale IOCs adept with advanced technology.

Domestic gas field production will peak in 2017 and then decline gradually. However, the demand for gas is forecasted to increase substantially. As such, the gap in demand and supply has to be filled in with import gas (LNG).

The introduction of LNG via Floating Storage and Regasification unit (FSRU) is expected to be launched by 2019 and it will provide around 17% of gas. The forecast is predicted to be: 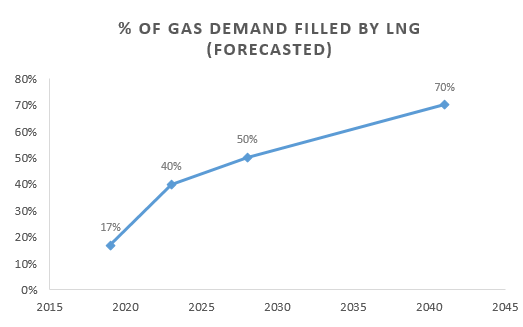 In recent years, Energy production from Coal has been on the frontline of energy policy for the Government of Bangladesh. Despite strong protests from environmentalist groups, steps have been taken towards extraction of coal mines.

Although GoB has put strong emphasis on the development of coal based power plant, the current situation is not promising. At present, there is only one Coal power plant in Boropukuria, which is not producing large volume of coal to the adjacent Boropukuria power plant.

The current oil demand in Bangladesh is around 5 million tons and is expected to increase substantially due to growth in the industrial and transportation sector.

Although Bangladesh has several plans to increase domestic oil production, majority of the forecasted oil demand is to be met through import of oil. The price of oil is highly dependent on global movement of oil price and as such, there is little scope of drastic change in the oil import and consumption scenario of Bangladesh. Bangladesh government has long been providing subsidy to petroleum products and as such prices are kept artificially high. This isn’t a sustainable plan in keeping with the increase in demand.

At present, only 2% of total oil demand is met through the use of LPG. However, as natural gas reserve is declining, the demand for LPG as an alternative source of cooking fuel is set to increase. LPG, at the moment is expensive (priced 2-3 times higher than pipeline gas). Due to high price, it is concurrent to the Governments vision of universal access to energy.

As one of the most susceptible country to the adverse effect of global warming, Bangladesh is in a strategically key position in terms of renewable energy. However, there are limitations to the maximum potential power generation through renewable sources. The two main limitations are the lack of available land and meteorological conditions. The highest renewable energy power generation potential is 3,700 MW.

The most promising renewable energy sector is the Hydropower sector due to the geographic nature of Bangladesh and its neighboring countries. According to a JICA survey, cross-border hydropower available to Bangladesh is in the range of 3,500-8,500 MW by 2030, mainly sourced from Nepal and North West India.

Bangladesh has shown success in meeting the Millennium Development Goals (MDGs) in the past few years. World Bank has set new goals, known as Sustainable Development Goals (SDGs), three of which are closely associated with access to electricity. The three SDGs are:

The Master Plan in Power sector reflects the goals set by the international community and also the government of Bangladesh. The Power and Electricity sector has to provide the backbone for economic and industrial development of Bangladesh’s economy in the upcoming decade.