Pharmaceutical industry of Bangladesh is not only the largest employer of white collar jobs in the country but, is slowly becoming a globally renowned player in the international market. Bangladesh has already crossed the BDT 6 billion mark in terms of foreign exchange earnings from drug exports in the FY2015-16.

According to the IMS data of second quarter of 2016, the current domestic pharma market stands at BDT 15,640 crore with about 280 companies operating. However, the first 10 companies occupying 70% market share and first 20 companies 86.5% market share. 97% of the medicines for the local market are produced here and the rest 3% imported are specialized cancer medicines and others. The current market growth rate is 30% with Square pharmaceutical being the market leader (18.8% market share) followed by Incepta (10.2%) and Beximco (8.5%). The current status-quo of the local pharmaceutical market remains very competitive with the local big players dominating the market.

All 3 of these top companies have already gotten US-FDA approval for drug exports. (FDA is the drug regulating authority which controls all food and pharmaceutical substance use, import, export etc. in the USA).

The current export earnings from pharmaceutical exports is $82.11 million USD (crossing the mark of BDT 6 Billion) a sharp rise of 13% from the previous year’s export earnings. 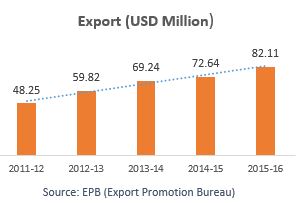 Currently the main export destinations remain as developing and least-developed-counties (LDC). Among the 105 countries Bangladeshi Pharmaceuticals are exported to the highest amount was for Myanmar ($13.60 million) followed by Sri Lanka ($13.38 million).The industry is also attempting to diversify its export destinations with the target of exploring 30 new destinations during the upcoming years.

However, the export market volume of BDT 6.5 billion is less than 5% in proportion to the domestic market volume of 156.4 billion.  If we compare the countries 2nd largest industry, pharmaceuticals with the first largest industry ready-made garments, we see that the pharma market is lagging far behind by contributing only . Digging deep into the underlying causes presents 3 main reasons. Firstly, medicine and drugs are sophisticated products and most countries have tight regulatory policies for their exports. Therefore, pharmaceutical products need to pass a lengthy and complicated regulatory approval for exporting to countries. Secondly, the big companies are more focused on the growing local market than the global market. And thirdly, the government provided facilities and incentives for the pharma industry are inadequate for encouraging local entrepreneurs and local companies towards export.

Then why should Bangladesh emphasis on the global market?

According to a report by the Department of Commerce of USA entitled “2016 Top Markets Report Pharmaceuticals”, the current global market stands at around $ 1.06 trillion in 2015 and is projected to grow to $1.3 trillion by 2020 with an annual market growth rate of 4.9%. Global healthcare expenditure especially cost of medicine is projected to rise in developed, developing and even LDC counties of the world.  Due to cost containment, MNC countries are outsourcing their production and developed countries are increasingly promoting access to generic drugs (generic drugs are medicine with expired patent which can then be manufactured and sold by other companies). Bangladesh currently has 2 advantages to take advantage of these conditions-

Firstly, Bangladesh has price advantage due to affordable wage cost of workers. Apart from that, the capital expenditure of land acquisition and factory setup are less compared to a developed country. An article on Washington post specifies that on average, the cost of setting up an FDA approved plant in India is 50% less and labor costs are 60-70% less compared to a developed country. Bangladesh also has similar cost advantages like India. For this reason, MNC companies such as Novo Nordisk, the global market leader for diabetic drugs, has it’s Asian manufacturing base in Bangladesh alongside India and China to use this cost competitiveness.

Secondly, the TRIPS agreement of WTO(World Trade Organization) on intellectual property rights granted Bangladesh extension up to 2032 as a LDC country. TRIPS (Trade-Related Aspects of Intellectual Property Rights) agreement specifies that countries cannot produce a patented medicine unless the patent right (usually 20 years in the USA and 10-15 years in other countries) for the medicine expires. However, Bangladesh being an LDC country was granted TRIPS exclusion up to 2032, meaning patented drugs can be produced here without violating the TRIPS agreement.

What can Bangladesh Pharmaceutical industry target and focus on for long-term growth in the global market?

Focus on the Generic Drug Markets

Generic Drugs are off-patent drugs that can be manufactured and sold by any company after the patent period has expired. The global generic drug market stands at around $ 250 billion with drugs worth more than $150 billion coming off patent by 2017. According to a report published by IMS entitled “Global Outlook for Medicines through 2018”, generics will be responsible for 52% of growth in the global healthcare spending from 2014 to 2018. A generic drug produced in Bangladesh has the same quality and composition but will be lesser in cost due to its cost advantage. The target market for generic products should be the emerging markets since they show highest economic growth rate (and per capita expenditure of health cost increases with increasing economic growth). Moderately regulated markets in the least developed and developing countries should be the second to target.

API or Active Pharmaceutical Ingredients are the main chemical components of a drug. Bangladesh imports the API needed for its local production from China or India. Focus on API production can give Bangladesh two advantages-

Firstly, producing the API locally will decrease the cost of locally manufactured drugs and it will add to the cost advantage for exports. Secondly, API can themselves be exported to countries and compared to drug products, API are easier to export. Global API market stands at 135 billion USD.

However, the government proposed API park in Munshiganj faces a standstill due to two obstacles- the energy crisis due to depleting gas reserve and the critical volume of manufacturing needed to reach economics of scale. Future opportunities for export still lies in manufacturing cost-effective API for LDCs.

Focus on the Contract Manufacturing

Contract or toll manufacturing first introduced in the National Drug Policy 2005, is an arrangement in which one company goes into contract with another company to produce raw materials by specialized processes or semi-finished goods for another company. Around 30 companies including Renata, Beximco, Square, Popular etc. are currently engaged in contract manufacturing for their local counterparts or foreign multinational companies.3

The global market is worth 50 to 60 billion USD with India as the current hotspot for outsourcing by global multinationals. Due to the cost advantage in Bangladesh, it can be a lucrative destination for the global MNC companies.  With current capabilities and patent ownership, companies can go into either manufacturing under license and export (the same company produces the drug and exports) or manufacturing under contract and transfer (the company only produces and the other licensed company exports).

To strengthen Bangladesh’s cost competitiveness, factors such as local equipment sourcing, raw material procurement, tax incentives and a focus on process innovation should be given. According to Bangladesh Aushad Shilpa Samity, approximately 1,200 pharmaceutical products received registration for export over the last two years and the amount is growing with companies exporting to 105 countries including major destinations such as USA, UK, Australia, and Africa. However, the total potential of export is yet to be taken advantage of and government policy support is needed to boost up this volume and build a sustainable competitive advantage for the industry.