Motorbikes: A Rise in local Opportunities 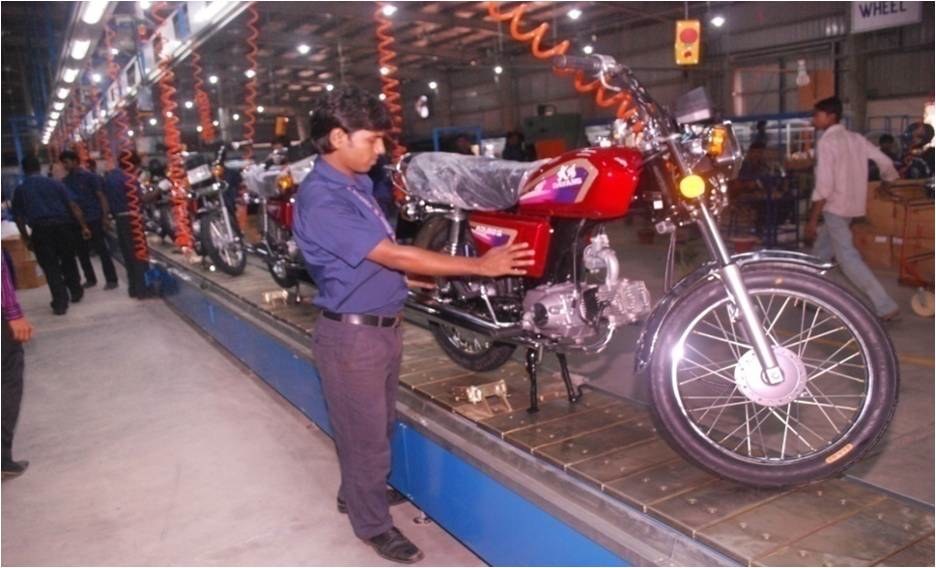 In a country with high population density, big cars are more of a hassle than help. Motorbikes comes in as a solution here as it is not just small and cheap to buy, but also cheaper to run and maintain. Besides all the benefits that it brings, motorbikes are currently becoming a source of income for many, as many otherwise unemployed rural residents are using it to transport daily commuters and earn money.

In order to protect the domestic motorcycle industries, the government have raised the import duties of imported bikes, both CKD (completely knocked down) and CBU (Completely Build Units). This decision was much appreciated by the leaders of Motorcycle Manufacturer and Exporters Association Bangladesh (MMEAB), as the imposition was taken as a window of opportunity for many investors (motorcycle manufacturers), as the demand for locally assembled motorbikes would hike up due to being cheaper compared to the imported units.

However, this decision was countered by the importers of Bangladeshi CBU and CKD units, specifically India and China, as they have also increased their import duties for both CKD and CBU by 100% in order to protect their domestic market.

In 2014, there was a decline in motorbike market by almost half. This was mainly due the political turmoil in that period, and also due to the relatively high registration cost, BDT20000 in Bangladesh compared to BDT5000 in India. This however promoted unethical practices as buyers avoid registration in order to avoid the cost. However, a decline in registration fees in 2015 and imposition of stricter regulations have given a rise in the number of motorbikes being registered. 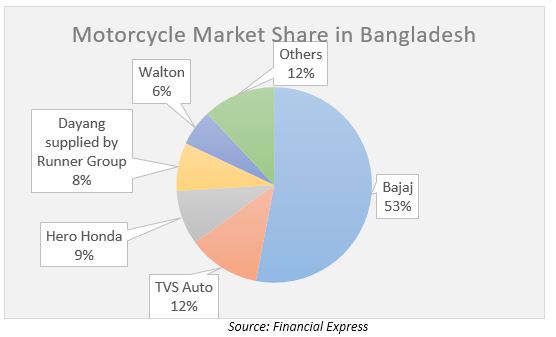 With the help of the government’s decision with increased tax duties, he local manufacturers are climbing up the ladders gradually. The popularity is also growing among the users. Runner Group has 8% and Walton has 6% market share. A minority 12% of the market share is shared by some comparatively high end brands like Yamaha and Honda, and other less popular one like Indian Mahindra and Chinses Haojue.

However, recent increase in the supplementary duty by 15% and conditions such as the imported parts should be in unpainted condition, would increase the production cost of the domestic assemblers. To establish a painting plant for the motorcycle would require at least 20 crore BDT. 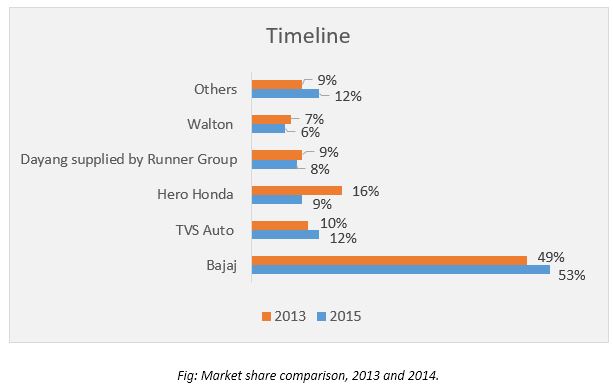 With the proposition of tax hike of imported motorbikes, local manufacturers have already started to take advantage of the opportunity. The market leaders are further optimistic about the sales boost as the political unrest have calmed down and there is a rise in export opportunities in countries like India, Nepal and also some African regions.

Runner, Walton and Jamuna are the major motorcycle manufacturing companies of Bangladesh. Others, such as Road Master and Grameen, are also looking forward to start manufacturing motorbikes locally.

The current annual demand for motorcycles stands at two lakhs and above, which might double after five years, as more people are purchasing bikes to get relief from the intolerable traffic congestion in the capital.

The local leader Runner group earned their right as a bike manufacturing company in 2011. They have the capacity of making 500 two wheelers per day. They planning to introduce stylish bikes in the future to compete with other competitors. Although they do supple part of their production locally, their main goal is to tap in the export market. They have already started exporting it to countries like Africa, India and Nepal.

Looking at the currently scenario, the tax policies, low corporate loan interest rates (around 10% to 11%), rise in skilled workers and improvement in infrastructure gives a ray of hope to the local motorcycle industry. Moreover, Demands are also expected to rise in the domestic market and new export markets are anticipated to open up. A sustainable long term model would thus confirm a promising future, benefitting the consumers and also the economy as a whole.

Md Imtiaz Hussain is a business analyst at LightCastle Partners. He graduated from North South University, majoring in marketing and international business. He is also a former entrepreneur in food business. He loves football and a foodie by passion.

Mahir Abrar Nikhat is a business consultant at LightCastle Partners. He graduated from the University of Hong Kong, majored in economics and finance, and currently is enrolled in North South University, completing masters in economics program.