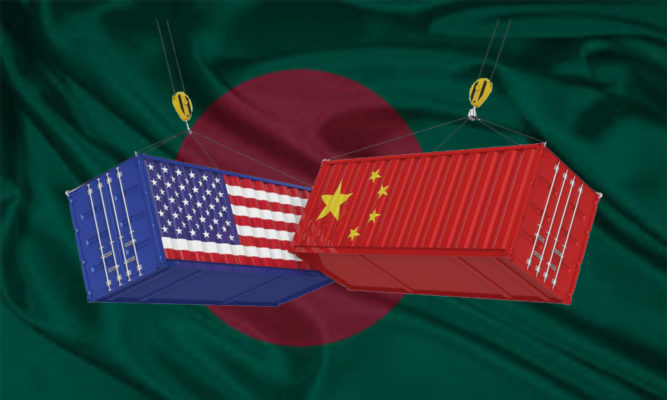 Where We’re At and What It Means

In 2017 the US trade deficit with China was $375.6 billion, which is also its biggest trade partner. The US currently has a total $3.9 trillion dollar debt of which China owns 29%, or $1.138 trillion, and US President Trump wants to fix the balance of power China holds over it, starting with trade. The goal of the Trump is to not only reduce the deficit and influence China holds as a result of this, but to also bring back jobs which fleeted the country years back when America shifted away from being a major manufacturer in the world.

In March 23, 2018, what began with tariffs on steel and aluminum imports has today grown into a combined value of $360 billion tariffs applied exclusively between the US and China. Although recently the two countries have come under a temporary truce, there is considerable doubt about whether global trade will ever return to its former state, which although may be a loss for the two giants, can fuel growth in other countries around the world.

An Apparel Industry Worth More than Gold

Bangladesh has a 6.4% share in  global export of apparels, a distant second to China whose market share lies at 36.4%. The country’s apparel industry has  recently seen a significant positive growth as more American retailers place a greater number of work orders, in efforts to avoid tariffs and political risks of the trade war. According to Bangladesh Foreign Trade Institute, Bangladesh had a 6.46% growth in market share in the American garments market during the first 3 quarters of 2018. The country has also benefited from being able to source cotton at cheaper prices from China, and now is its largest importer of cotton. However, there has been a 10-12% increase in cotton prices from India, which normally provides Bangladesh with half of its import requirements which may be soon to change.

In 2012, a report by Mckinsey forecasted that ready-made garments from China would decline, Bangladesh would be the next hot spot, and the market would triple in value by 2020 from $15 billion in 2010, and the country is on to achieve just that.

Large apparel retailers normally diversify their areas of sourcing to avoid political and economic risks associated with dealing with a single country, but the trade war has accelerated the pace of this shift, leading to large buyers seeking alternatives to source their apparels to the next best options, Bangladesh and Vietnam. The country this year aims to reach a target of $39 billion in exports of which 83.49%, or $32.69 billion is set to be from the apparel sector alone. Although it currently lacks the production capacity to catch this golden goose, measures are being taken to build capacity to catch up with increasing demands. For a country where 20% of GDP comes from textiles and apparel, these shifts are worth more than the country’s demand for gold.

The majority of steel requirements in Bangladesh comes from importing scrap iron from the US and its domestic ship-breaking industry. However, in March 2018, the US imposed a 25% tariff on all steel imports, in efforts to revitalize its declined steel industry. This action led to suppliers of scrap iron in the US to storing their reserves in anticipation of greater tariffs. As a result, Bangladesh has seen a significant rise in the price of rods, a vital product required for its many infrastructure projects.

In 2017, the country scrapped 25% of the ships dismantled worldwide, and in light of upcoming development projects, Bangladesh might choose to develop its shipbreaking yards, in hopes of sourcing a greater amount of cheaper steel domestically, which is already providing more than half of the country’s supply of steel.

According to the Farm Bureau in the US, soybean exports to China have declined by 97%, after China’s tariffs on US soybeans and cotton came into effect. At the moment, Bangladesh imports crude soybean oil from Brazil and Argentina and is mainly involved in only the refining process. Only a few companies are involved in crushing of the beans, but with the significant drop in prices, they may benefit from reduced costs of importing the crude soybean oil. Although recently the price of loose soybean oil has dropped, bottled soybean oil remains the same. Presently, the country imports 2 million tons of crude vegetable oil, of which 30%, or 600,000 tons is soybean.

If the country can vertically integrate its supply chain in this business, it may have the potential to bring the oil to consumers at cheaper prices without needing to sacrifice profits in the long-run.

China recently announced tariff cuts for imports from Bangladesh. At the same time, Bangladesh, and other low income countries in South Asia, currently face US duties of 15.2% of total value of exports, which may be eased if the US wants to provide incentives to increase imports from these countries to make up for its gap from China. Bangladesh may see an increase in FDI from China greater than forecasted, through factory relocations, especially in the growing export processing zones (EPZs) as costs of doing business in China rise. It is therefore critical that proper infrastructure, and ease of doing business in the country is developed to stimulate growth in these areas.

Although policy makers in China are seeking to tighten constraints on capital flow in hopes to preventing a depreciation of the yuan, China’s rising involvement in various projects of Bangladesh may mean constraints may not be as effective in the case of Bangladesh.

Although it is fairly unpredictable as to what commodities may become the next target of the US-China trade war, Trump’s objective of balancing trade with China means a great opportunity is sitting in front of the country.