Bangladesh in the Post-industrial World 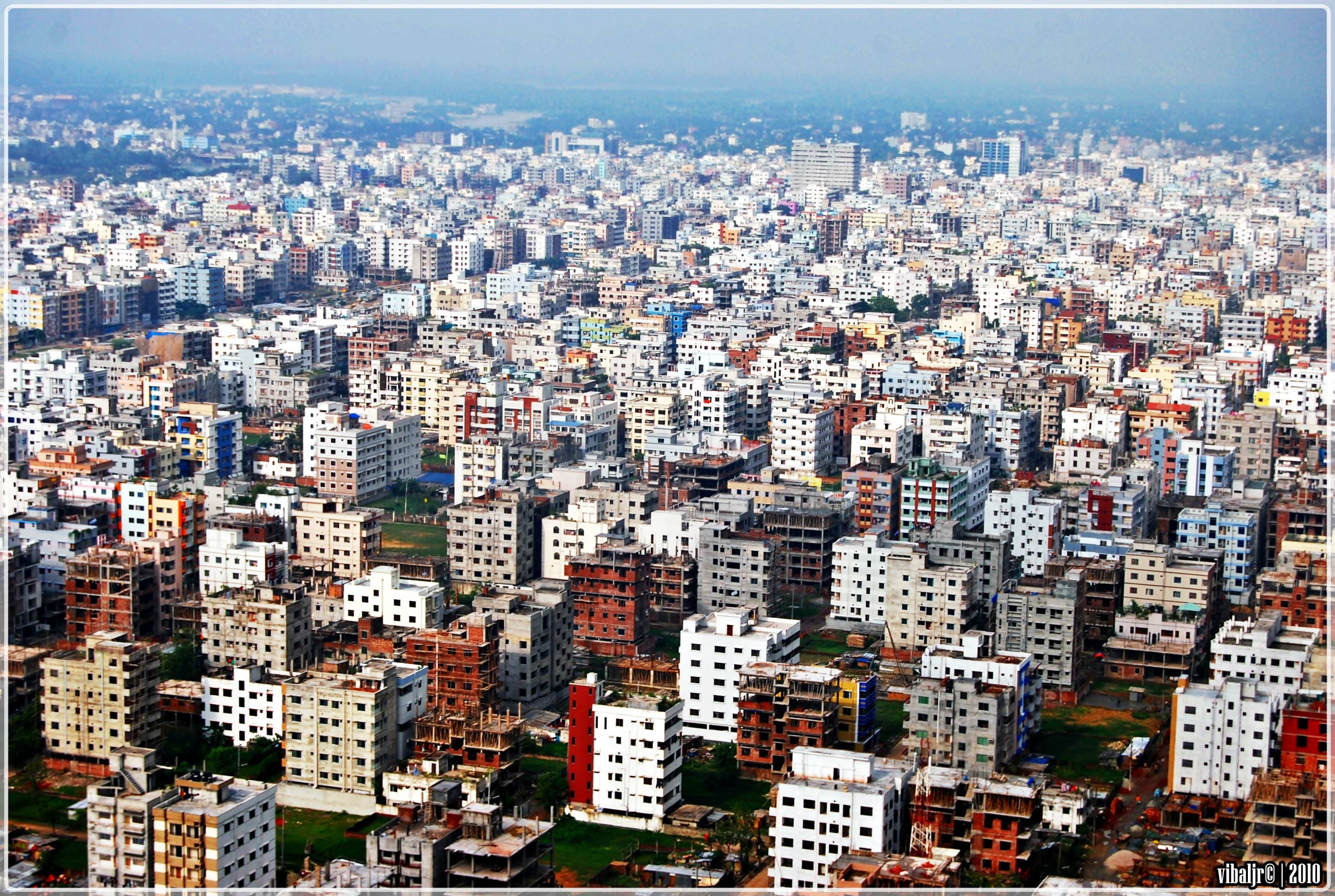 Bangladesh’s economic performance, over the last decade, has garnered praise from the international community. Multilateral development agencies like the World Bank, often pinpoint Bangladesh as an exemplary case for economic development. From being termed a ‘basket case’ – by the then US Secretary of State, Henry Kissinger, in the early 1970s – to achieving continuously increasing GDP growth rates for the last 5 years, the country has come far. Forging ahead of Pakistan and growing neck-to-neck with India in economic terms has given the country renewed hope and confidence. However, at the onset of the third decade of the 21st century, the country faces several structural challenges potentially impeding the medium to long-term growth. These fault lines, if left unaddressed, can prove detrimental to the growth potential of the country.

Bangladesh’s growth has been spearheaded by the apparel sector, which accounts for 83 percent of total exports and 12 percent of GDP, placing the country as the second largest player in the global apparel market, after China. Remittances have also played a pivotal role in stabilizing BOP (Balance of Payments) conditions, generating USD 14.9 billion in terms of foreign currency inflow as of FY 2017-18. Although tertiary sector has the maximum GDP contribution (52 percent), the primary sector — garnering only 18 percent of GDP — employs 47 percent of labor. Since majority of workers operating in the agriculture sector are essentially underemployed, government is keen on shifting bulk of these unproductive workers from primary to secondary sector. To this end, policymakers have adopted an industrialization strategy, aimed at maximizing the benefits of the country’s demographic dividend.

This has been a proven model for economic development and some of our Asian neighbors have directly benefited from the manufacturing-led growth strategy.

Disruption of the Classical Growth Model

Over the last 60 years, economic growth for emerging countries has been driven by the secondary sector. This has been the experience of the original Asian Tiger economies – Taiwan, South Korea, Hong Kong and Singapore. Asian tiger cubs comprising of Indonesia, Malaysia, Philippines, Thailand and Vietnam have had similar experiences as well. Majority of the tiger economies had started off manufacturing low-margin products utilizing inexpensive labor, and then gradually shifting to production of high margin products. Some of the more successful economies like Japan and South Korea have eventually evolved into innovation and knowledge-driven economies, contributing to major innovations and launching global brands. 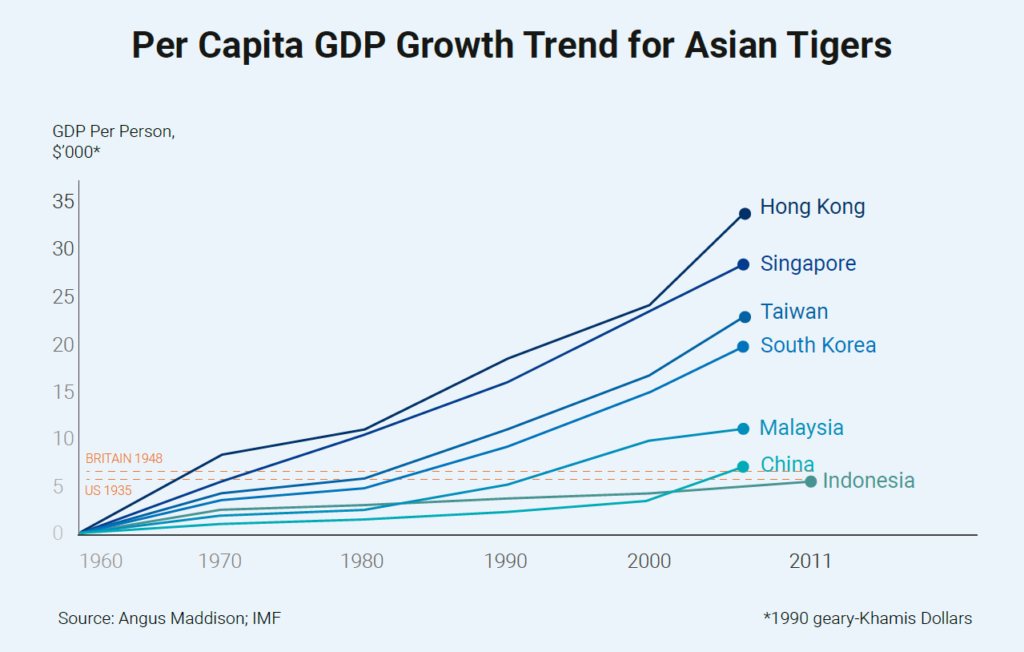 Developing economies like Bangladesh, Vietnam and Cambodia have been the main beneficiaries of this gradual shift in manufacturing. Since the 1980s, South Korea and Taiwan have moved up the value chain, specializing in electronic components and consumer electronics manufacturing. As a result, low-margin apparel industry, requiring less skilled workforce, gradually shifted to countries like Bangladesh, India, Vietnam, Pakistan and China. China is following the same trend as South Korea and as labor costs are rising in China, there has been another wave of shift in manufacturing industry to cheaper destinations.

While many would expect Bangladesh to follow a similar trajectory of manufacturing-led growth like its South East Asian neighbors over the next decade, several technological shifts may prove inimical to future growth. In fact, the country’s growth might cascade downwards towards the negative if we fail to undertake precautionary actions.

A Tectonic Shift in the Technological Landscape

The 21st century has paved the way for automation due to growing prowess of processors. Due to technology becoming more ubiquitous in all spheres of our lives and the internet connecting us all together in a common web, we have increasingly become more interdependent. Internet of Things, also known as IoT, is a network of interconnected smart devices that allow each separate device to interact (i.e. send or receive data) from other devices on the network. As IoT becomes more mainstream, more data would be accessible for making increasingly better decisions, eventually replicating and then surpassing human intelligence. Super computers like Watson have already surpassed human capabilities in certain areas, and with adequate supply of real-time data, many computers would have the ability to engage in machine learning to make better decisions. The medium term impact of the 4th industrial revolution would be in terms of loss of jobs.

According to The Economist, 50% of the jobs are vulnerable to automation. However, some industries would be more prone to automation, particularly for the sectors with repetitive jobs, where AI-powered robots would easily replace humans. The OECD released a list showing the likelihood of roles, within specific industries, becoming obsolete or automated. 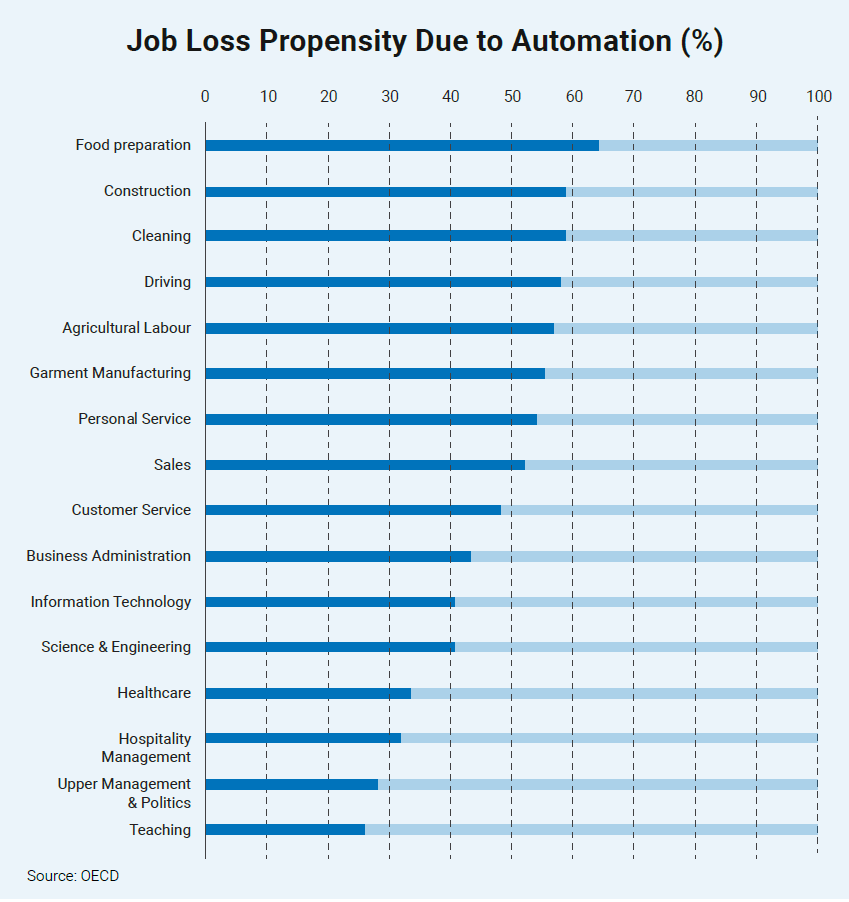 The apparel sector jobs have high risk of getting automated, which will significantly curtail the cost competitiveness of Bangladeshi apparel. Many investors will opt for automation in place of more troublesome human workers if the initial investment can be justified for automating operations. Many international apparel buyers would also prefer purchasing apparel either from their own country or from a country closer to their markets as labor costs become irrelevant. A number of apparel manufacturers have already setup fully automated factories armedwith Sewbots, which can independently sew clothes based on specific instructions. Automated factories require 70-80 percent less number of workers compared to comparable semi-automated factories.

A human sewing line can produce up to 669 t-shirts in 8 hours, while a sewbot based production line can produce 1,142 t-shirts during the same period. As more apparel factories take up sewbots, the average cost for manufacturing these robots will keep decreasing, making them more commercially viable. This will eventually lead to job losses for apparel workers due to automation and exodus of international investments to more developed markets. Bangladesh’s remittance earnings may nose-dive, as basic jobs like food preparation, construction, and cleaning, driving and agricultural labor have a higher risk of getting automated. A significant portion of expatriate workers staying in Middle-East are engaged in the aforementioned jobs.

The upcoming challenges in the next decade can have a permanent damage on the country’s economic fabric, particularly due to overdependence on apparel manufacturing. While there’s no easy answer to these impending challenges wrought about by the 4th industrial revolution, policymakers must eke out long term strategic shifts for diversifying the economy. Education would play a critical role in equipping the workforce to adapt to the technological upheaval. As aptly stated by a renowned futurist, ‘The purpose of education in the 21st century would be to distinguish oneself from a machine.’

The workforce must develop skills that can’t be replicated easily by robots. These include fostering creativity, problem solving ability, leadership & people management skills, critical thinking ability and adaptive learning. The nature of jobs will keep on changing and workers need to unlearn and relearn new skills. Universities of the future would be keen on equipping students to excel at the art of acquiring new knowledge and learning novel skills.

Bangladesh must find ways to ride the service growth bandwagon, driven by the ICT sector. While traditional outsourcing services will eventually get automated, the local ICT sector must find a profitable niche in the knowledge process outsourcing (KPO) based market segment that should require creativity, originality and heavy human involvement. However, large groups of semi-skilled and skilled workers may become unemployable and would likely require large-scale retraining initiative from the government for staying in tune with the market. The country’s future might not be cataclysmic, but the eventual technology-led economic turmoil might prove to be a major dampener to the country’s future growth, unless concerted attempts are undertaken by the government and relevant stakeholders for stemming the tide of the 4th industrial revolution.

This has been published as part of LightCastle’s 6th year anniversary publication, “LightCastle Featured Insights 2019“.