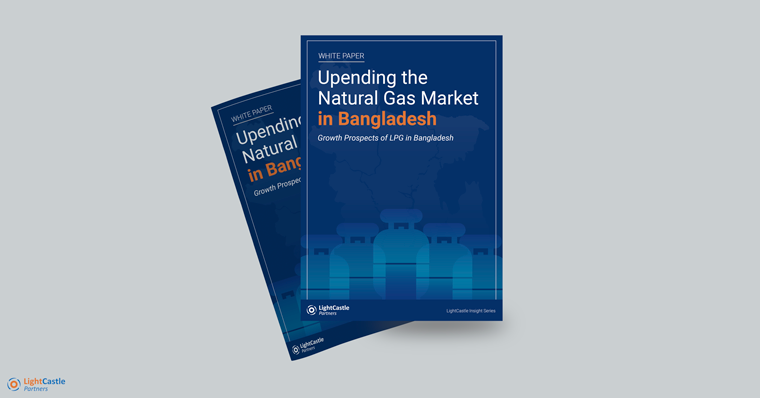 Bangladesh’s economy has expanded by a remarkable 7.86% to USD 275.8 billion in 2018 compared to 2017, resulting from strong private consumption, public investments and remittance inflows. It is expected that the country will become the second best-performing economy in 2019, with an estimated economic growth rate of 7.9%.

However, to sustain the rising development, having a steady supply of energy is of paramount importance.  Infrastructural deficiencies remain key bottlenecks to achieving sustainable growth, compounded by the gradually depleting domestic natural gas supply. On top of that, burgeoning secondary and tertiary sectors have increased appetite for resources critical for fueling future growth. The table below shows the segmentation of energy demand projections across key sectors. 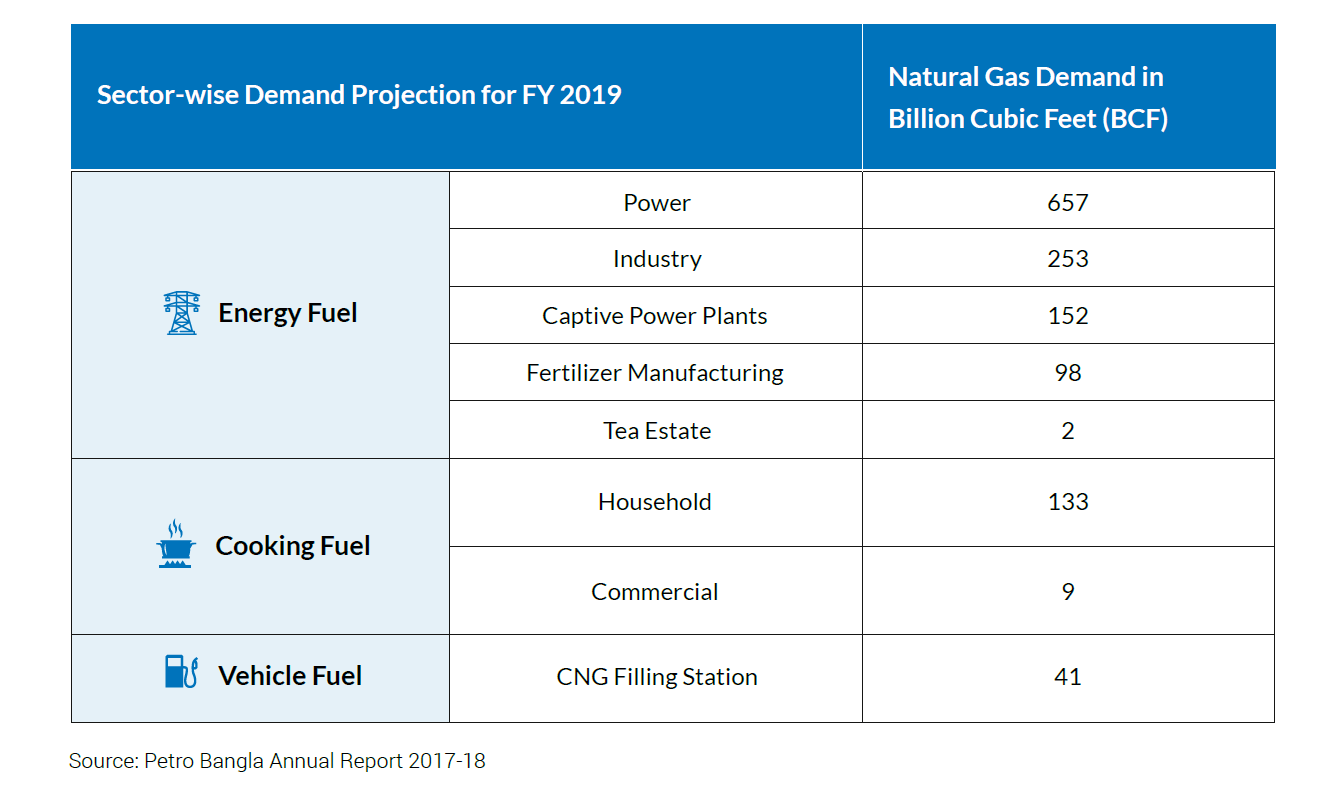 Taking into account the growing demand for energy from both industrial and residential users, the government has no option but to ration natural gas. As a short to medium term solution, the government has started importing the expensive Liquefied Natural Gas (LNG). By the end of January 2018, the country’s natural gas reserve stood at 21.17 trillion cubic feet (TCF), which can roughly meet demand till 2026. With 23 operational gas fields, the country produces about 2,700 million cubic feet of gas per day (mmcfd) against a steady demand of 3,700 mmcfd, leaving a shortage of 1,000 mmcfd as of 2018.

If Bangladesh were to advance faster, we need to look beyond traditional sources. And to that end, Liquefied Petroleum Gas (LPG) serves as a key alternative.  Through investment friendly policies – some of which are already in place – in support of this thrust sector, Bangladesh can grow faster.

LPG, a green and clean hydrocarbon fuel, is an environment friendly vehicle fuel, which can play a pivotal role to mitigate air pollution alongside propagating other benefits. In fact, Autogas has emerged as the premier user of LPG. Public authorities have taken initiatives to gradually replace CNG with LPG in transportation in an effort to reduce dependence on natural gas.

The market for LPG took off in 2009 after the government stopped providing new piped gas connections to households. Newly developed households and enterprises in townships since 2009 have been extensively using LPG as the cooking fuel. Note how the trend has shifted significantly over the last 20 years (from 2.4% to 19.6%) in regards to the usage of LPG as a source of cooking fuel. The following diagram illustrates the changing trend. LPG sector – having a triple digit growth rate – is set to grow three times from the current estimated market size of 1 million Metric tons (MT). Decentralized economic development, absence of natural gas connectivity in some parts of the country, and emergence of LPG as a vehicle fuel will be the major demand drivers for the industry in the coming years.

Considering the potential of the LPG sector, new players are planning to enter the industry every year. As of November 2018, 13 companies have been operating in the market, while seven companies are finalizing their market entry strategies for entering the market in 2019. Although 55 companies received licenses for carrying out marketing and distribution of LPG, not all of them secured the final approval. Public and private sector players jointly supplied 600,000 MT LPG against the estimated demand of 1 MT in 2018.

The seven companies, which received preliminary licenses for entering the LPG market, with a cumulative investment of BDT 1,500 crore, are heating up the market. According to LightCastle’s primary research, at present the market is led by Bashundhara with a 24% market share, followed by Omera and Jamuna with a market share of 20% and 17% respectively. The following table illustrates further. 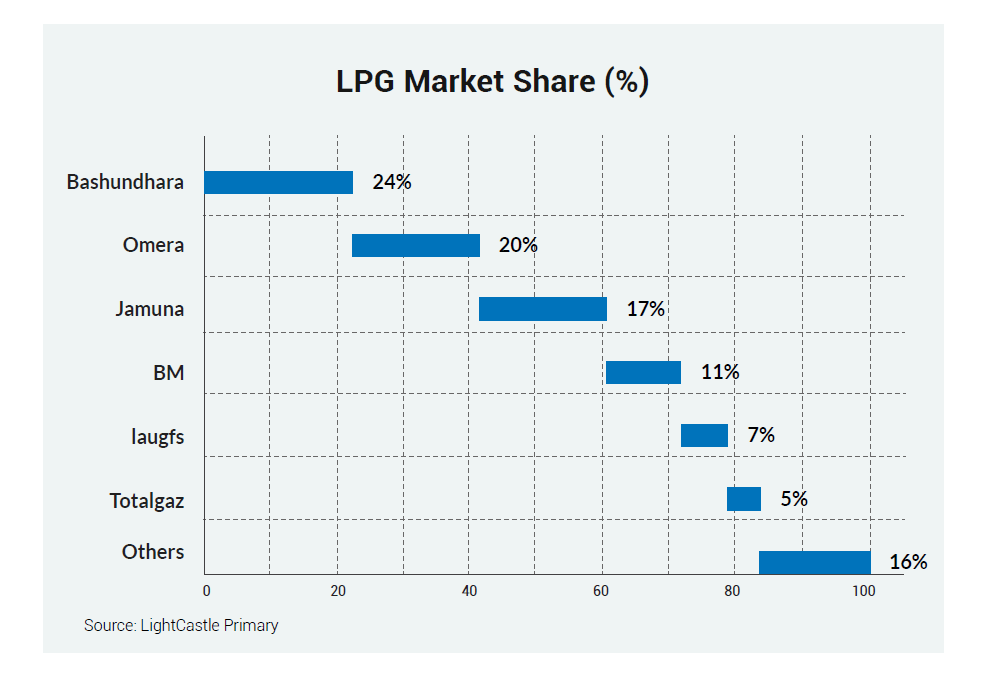 Investment friendly policies are paving the way for a brighter future

Tax exemption policy for LPG import has played a major role in the growth of the sector. Additionally, import tax on equipment used for assembling LPG cylinders have been set below 5% . Another favorable government tax measure for the industry is the reduction in AIT (Advance Income Tax) from 5% to 2%.

However, a company wiling to set up a LPG bottling plant has to meet a long list of regulatory requirements. The entity has to secure permission and license from a motley of ministries and relevant authorities. Moreover, adequate care needs to be taken to design the layout of the storage facility, including the arrangement and location of plant roads, walkways, doors, and other operating equipment for safety reasons.

Bangladesh’s long term view to graduate to a manufacturing-based economy will definitely create a number of new opportunities. The energy demand emanating from both households and industries will keep increasing in the coming years. In order to cater to both the segments equally, government will have to allocate subsidized LNG for power and manufacturing sector, while promoting LPG for household and business consumption. Considering the country’s growth trajectory, the prospects of the LPG sector can be assumed to be secure.