Prospects of Wage Digitization In The Apparel Sector

The case for higher Financial Inclusion in Bangladesh through wage digitization

The Bill and Melinda Gates Foundation has identified Bangladesh as one of the nexus countries for driving greater financial inclusion – positively affecting millions of lives. Currently, the country has a 47% financially included population according to Financial Inclusion Insights (2018) and this is gradually increasing with higher digitization of products, services and proliferation of mobile internet users. The Gates Foundation commissioned two market research studies with us to explore the possibilities and challenges associated with digitization of wages in the apparel sector and the prospects of digitization in the microfinance sector as these two sectors greatly affect the lives of people living in a low income bracket. This would give the foundation a holistic strategic path it can utilize to plan its intervention initiatives accordingly.

As the apparel industry of Bangladesh aims to gain higher export in an increasingly competitive global market, sustainability, quality and digitization have become crucial forms of differentiation and competency. Wage digitization in the apparel sector directly affects the lives of 3.5 million people, who are employed in the industry, living under an income bracket of less than USD 150 a month.

Wage digitization is seen to have direct positive correlation with increase in financial inclusion and currently close to a million workers in the apparel industry are now receiving their salary as digital wages.  The apparel sector is indubitably a key sector in Bangladesh and greater digitization in the industry will have compounded positive effects on the lives of a large work force. Similarly with just a 15% increase in transaction digitization would positively affect the lives of close to 4.5 million women borrowers. Currently 1 million apparel workers are receiving salaries digitally and further digitization of transactions would not only help microfinance institutions increase efficiency but potentially reduce interest rates and cost of borrowing for its underprivileged borrowers.

In order to assess the two industries effectively, we conducted 40 in-depth interviews and sat with worker rights organizations to understand the current industry dynamics. We analyzed industry parameters and developed strategies on ways to accelerate usage of digital financial services (DFS) for institutional clients. We also developed recommendations on product development to accelerate financial inclusion and DFS uptake by large institutional stakeholders. The work entailed gathering insights from a motley of stakeholders through interviews and FGDs.

According to 82.5 percent of respondents, the major benefit all DFS adopters experienced was the time saved during the wage disbursement week. Although the banking process time remained similar to the cash based system, the salary week disbursement process was much faster. Although not clear at first, the benefits of digitization were slowly materializing to worker groups as they became more habituated with the system. It saved them time and their earnings were now more secure on a digital platform. According to major DFS providers, although the cash-out rate is high in the first few months of digital wage disbursement, this cash-out frequency reduces over time as workers start to feel more secure with having their money in a digital form. 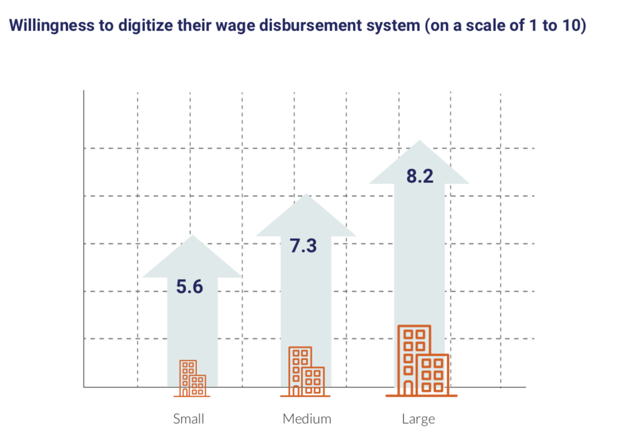 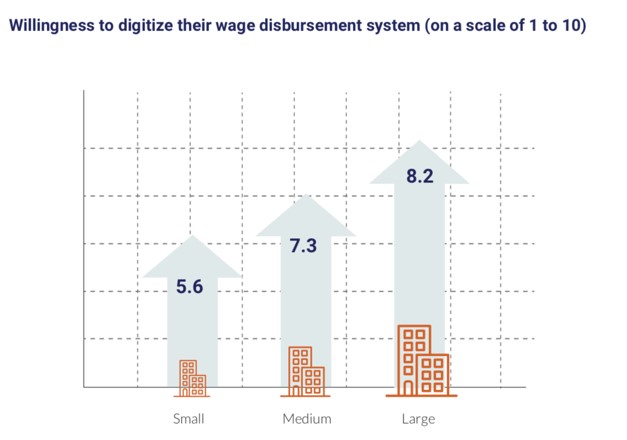 In order for the industry to prioritize wage digitization, stakeholders of the industry need to work in tandem to create greater impact. The ecosystem of merchants who accept DFS payments needs to be deepened by the DFS providers in order to increase adoption among workers. If workers do not have enough outlets to transact digitally, they will not see the benefit with a digital system.

The wage digitization process neither falls on a continuum nor is there a one size fit all approach. Each factory has its own requirements and different time frames in which wage digitization can take effect. Suppliers must have enough options to digitize at a rate that is realistic and with a DFS partner that works best for them. Additionally, buyers and suppliers need to work in alignment in order to drive the digitization agenda among factory owners. Creating digital advocates among large suppliers and hosting platforms for knowledge sharing of buyers on digitization would greatly facilitate the process. Workers need to be trained on tech literacy by stakeholders to make the transition smoother for them. Overall, there are strong opportunities for creating social impact through wage digitization and apparel manufacturers do see the business case of being more digital.

At an accelerated uptake, wage digitization in the apparel sector would increase financial inclusion drastically. Just recently BGMEA has signed an MoU with the ICT ministry to create an e-wallet for RMG workers in order to create greater access to financial services. This is a tremendous achievement and a step in the right direction for the industry. However, there still exists realistic impediments to the faster adoption of wage digitization.