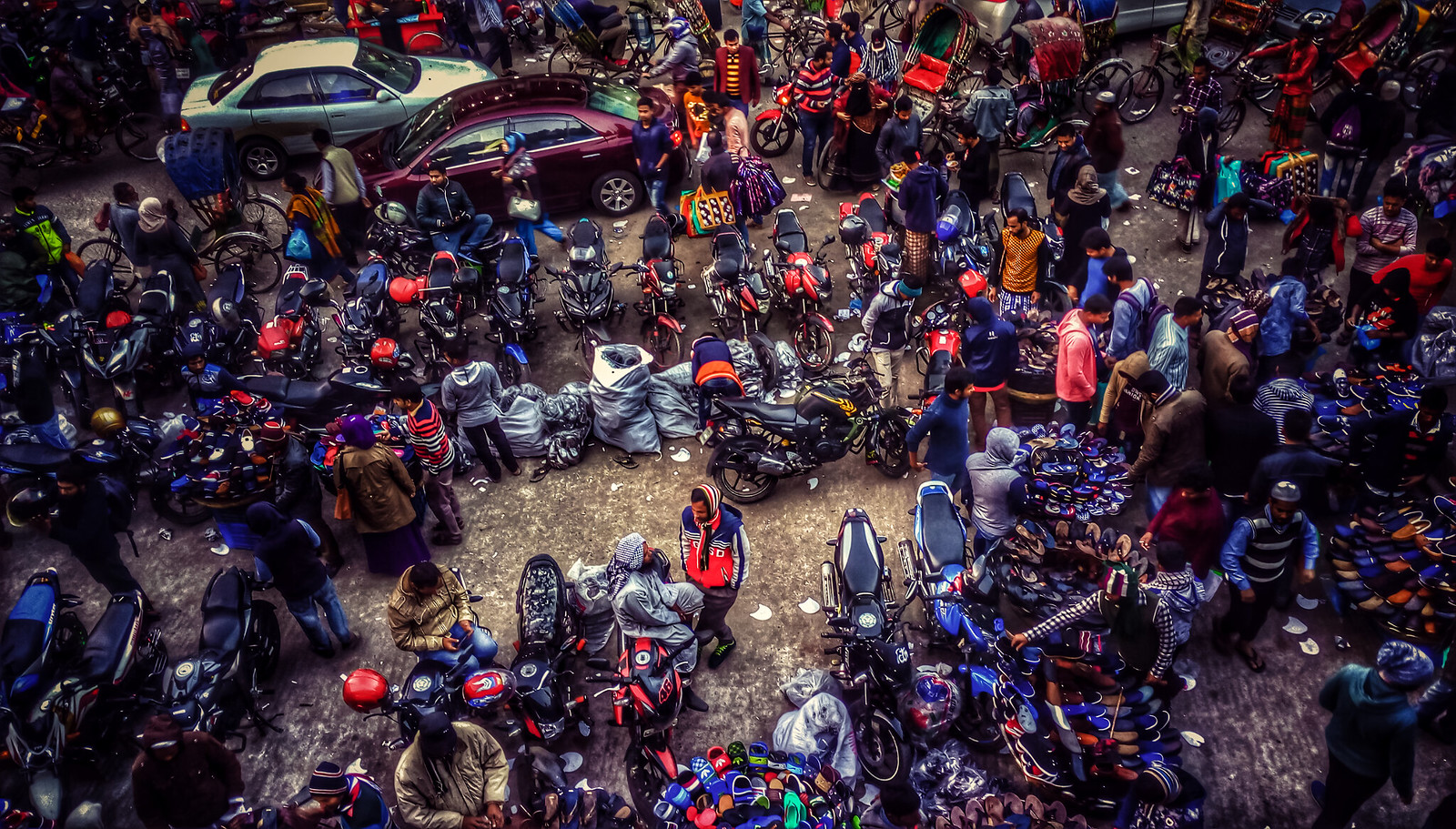 In the backdrop of Dhaka city’s fabled traffic mismanagement and congestion, motorcycles offer a more affordable alternative to its counterpart–cars. The rising middle class of Bangladesh has been a significant driving force behind the motorcycle industry’s phenomenal rise as bikes are cheaper, easier to maintain and faster to navigate with than cars. Since 2010, the number of motorcycles in Dhaka alone has more than doubled to roughly 469,888 units.[1]

The origin of the industry’s boom is a multivariate question. The answer lies behind a series of events ranging from government tax initiatives, import policies, innovations within the tech industry such as the rise of ride-sharing apps and the growing middle class.[2]

Across the globe, the motorcycle market is performing well. In the backdrop of emerging economies and the overall increasing purchasing power of people in developing nations, the market is projected to grow at 4.4% per year through to 2022.[7] This expected growth can primarily be attributed to a stronger and more robust global economy and the increasing availability of budget-friendly models.[7] The three main global regions in the market right now are North America, Western Europe and most importantly Asia.

North America represents a more mature market for motorbikes. However, demand is still expected to increase, partly inspired by the newfound economic confidence of the post-recessionary period.[7] People who previously put off purchasing motorbikes are now more likely to switch to newer models. Western Europe will also be friendly to motorbikes, particularly e-bikes, given their more eco-friendly nature. Asia represents the most important market for the motorcycle industry. Asia made up 80% of global motorcycle sales in 2017.[7] The rise of the Asian market is a result of improving economic and living conditions, the inability of most households to afford typical automobiles, government investment in rural areas, and ineffective and overcrowded public transportation.[7]

The motorcycle market size stands at approximately $476 million as of 2017 in Bangladesh.[2] The local industry has seen very healthy sales growth rates over the last few years. With an average growth rate of roughly 60% as of 2017, this trend is expected to carry through 2019 and into the foreseeable future.[3] 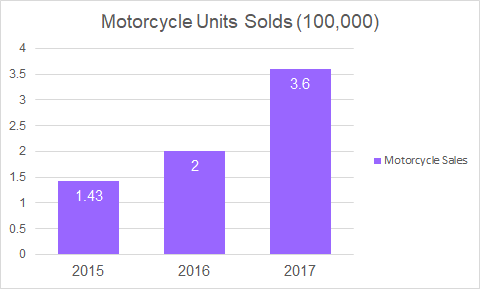 The standout characteristic of this rise in sales is the newfound prominence of local manufacturers/assemblers within the industry. The government has reduced supplementary duties on imported parts to 20% from 25% used in local manufacturing of motorbikes, which has greatly reduced the cost of production.[2] Given that 70% of the parts used in motorbike assembling and manufacturing are imported, these cuts in supplementary duties represent a huge financial blessing to local manufacturers.[2] Additionally, motorbikes have been included in the existing VAT exemption which has helped bolster sales.[4] Finance Minister AHM Mustafa Kamal added three new raw materials into the concessionary duty list for the fiscal year 2019-2020.[11]  At the same time, imported motorbikes are subject to a protectionist tariff regime, which raises their price and makes them less competitive in comparison to locally manufactured motorbikes.[5] The reduction of registration costs from BDT 20000 to BDT 5000 for both imported and locally manufactured/assembled bikes has also helped the market grow further.[5]

In addition, another major driver behind the boom of the motorbike industry is the rising economic status of Bangladesh–in particular, the rising economic status of the middle class.[2] According to  Mukesh Sharma, Managing Director and CEO of Runner Automobiles Ltd., the demand for motorbikes increases when GDP per capita adjusted for Purchasing Power Parity (PPP) exceeds $4000. He further mentioned that Bangladesh’s GDP per capita (adjusted for PPP) currently stands at around $4561, which explains why growth has come so quickly for the industry.[4] As the country’s middle class continues to grow in prominence, the industry will continue to experience growing sales.

The government of Bangladesh has also taken steps to empower the motorbike industry. Last year, it implemented the National Motorcycle Industry Development Policy 2018, which aims to diversify the country’s manufacturing and exports, creating jobs in the process. The policy is expected to raise the sales of motorbikes to 0.5 million by 2021 and 1 million by 2027.[6] According to Bijoy Kumar Mondol, CFO and company secretary of HMCL Niloy Bangladesh, the market is projected to grow to 1 million units within three to four years.[3]

Despite the upward thrust the industry is experiencing right now, there still remains a few key issues that need to be dealt with if the local market expects to remain a catalyst for growth in the long run. Around 70% of the component parts used by local manufacturers/assemblers are imported, while only 30% are sourced locally.[2] Essentially, this means that the vast majority of the manufacturing process is being subjected to supplementary duties. In order to be competitive in the long run, local manufacturers need to establish local backward linkages by domestically manufacturing the majority of component parts. In addition, even though registration costs have come down, it is still high.

However, according to the National Motorcycle Industry Development Policy 2018, registration costs will be adjusted in accordance with the neighboring countries, keeping in mind the industry’s expansion.6 Additionally, financial institutions in Bangladesh do not provide adequate financing options to potential buyers of motorbikes. This lack of credit suppresses the demand to some extent, however, BRAC Bank and City Bank have recently started providing some financing options to potential motorbike buyers.[2] The biggest challenge the industry faces is competition from Indian brands, which collectively hold the lion’s share of the market.[2] 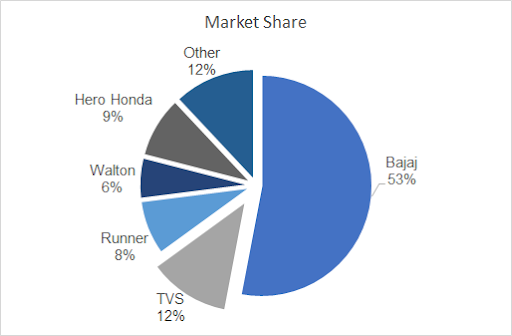 The motorbike industry has great potential to become a source of growth in the country. The rise of ride-sharing apps have created a bustling market for economic means of transportation and has also generated employment for many.[8]

For the industry, becoming even more competitive than Indian brands by cutting costs and offering better value is a key step. Establishing backward linkages domestically should be a priority. Financial institutions can play a key role in this development by offering financing options that can stimulate demand and bolster sales. Perhaps the industry’s biggest scope lies in what may at first glance appear to be an unrelated area: the smartphone industry and the rise of ride-sharing apps.

As the middle class grows in Bangladesh, smartphone usage has also dramatically increased. It is the ninth-largest smartphone market by unique consumers and as of 2017, smartphone penetration reached half of the population at 51%.[9] This is expected to grow with a CAGR of 3% to 82% (107 million users) by 2025.[9] Ride-sharing apps such as Pathao and Uber have benefitted from the motorcycle industry’s growth as they have been able to reach more customers and have further increased demand for motorbikes, causing more people to purchase motorbikes in order to make money through these apps.[4][6] It makes sense to hypothesize that as smartphone penetration increases and ride-sharing apps soar in popularity, motorbike sales will continue to grow.

As things stand now, the local motorcycle industry should grow as long as the economy stays strong. However, if the government gives in to BGMEA’s demands for the competitive devaluation of the currency, the local motorcycle industry will be hit hard.[10] As local manufacturing is greatly dependent on imported parts, a devalued currency will raise costs, making motorbikes less affordable and competitive. Concrete efforts must be made to develop quality local vendors for component parts and build strong backward linkages to maintain/encourage the growth of this industry.