Translated in the ‘Festival of Sacrifice’, Eid ul-Adha is a Muslim holiday celebrated throughout the world by commonly sacrificing sheeps, goats, and cows, and donating a third of the meat go to underprivileged and poor. And for a long period of time in Bangladesh, a majority of cows for the sacrifice had come from India.

In 2015, however, Bangladesh’s livestock sector was faced with a shortage crisis of cows from India for slaughter in anticipation of the upcoming Eid ul Azha. The Indian government had increased its vigilance in the trade following religious sentiments in their country as cows are viewed as sacred by the majority Hindu population. Prior to this time, an estimate of around 2 million cattle was smuggled into Bangladesh every year, which has dropped down to a little above 300,000 during the time [1]. During this period over the Muslim majority in Bangladesh were faced with the question, where would they be getting the cows for sacrifice in the future?

Prior to this time, the vast majority of cattle imported from India were through informal channels due to economic benefits of creating a formal market were overruled by religious, political, and humanitarian issues [7]. According to a 2014 study by Bhattacharjee (2014), the value of a cattle sourced from an Indian state during the time of being sold in the Bangladesh retail market could increase by at least 7 times. Traders in the downstream side of the supply chain in Bangladesh could receive as high as 77% margins, depending on a variety of factors including supply, seasonality in demand, logistics and miscellaneous expenses [7]. And despite Bangladesh having one of the highest densities of livestock in the world, it had not been able to meet domestic demands for meat, milk, and leather.

Despite being considered a haven for cattle, India has remained one of the largest global beef exporters tying with Brazil for the top position [3], with a majority of the beef sourced from buffalos [7]. In 2017, India’s beef exports were valued at around $4 bn, despite drives in the country by religious fundamentalists to stop cow slaughter for consumption. Following the ban, cattle trade from India to Bangladesh had shrunk from $1.5 bn to $250 mn (2017) [4]. 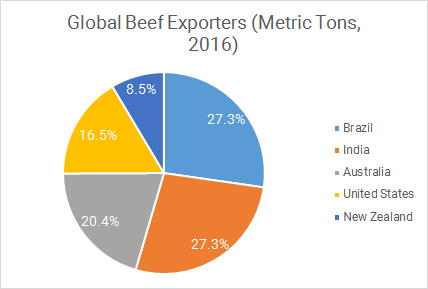 In Bangladesh, livestock contribution to GDP has consistently declined from 2.06% in FY10 to 1.47% in FY19. Overall, in terms of protein availability, meat is the only source (apart from milk and eggs) which is available at a surplus in the country [2]. Indian cows have been, for the most part, the cheaper alternative to domestically raised cattle in the country.

Most traders in the past would receive smuggled cattle from the borders (coming in from India), months away from the annual Eid festivals, fatten the cows and then resell for profits. However, a large portion of cows brought in were those bred for other purposes such as farming/milk production, only to be sold for meat once its productivity has declined. Other industries tied to cattle such as leather and bone-crushing are directly tied to cattle, raising the importance of a steady supply of cows in the country. 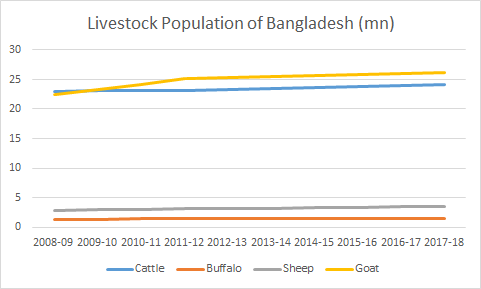 So how is it that a country that was once highly reliant on its neighbor for beef, became self-reliant to the point of now looking to export beef in the next 2 years?

Currently, there are around 24.2 million cattle in Bangladesh 2 with around 85% of them indigenous in origin such as the Red Chittagong, Pabna, North Bengal Grey and Munshiganj among the ones with greater yields [5]. Indigenous cows in Bangladesh fall far behind other foreign species when it comes to the production of meat, but are better adapted to the harsh tropical environment, resistant to local disease, and can maintain their health despite the poor quality of feed [5]. Major constraints to the development of cattle in the country have been associated with a lack of quality species for breeding, cost-effective feeds, disease outbreaks, medical care, and unregulated market prices [5]. 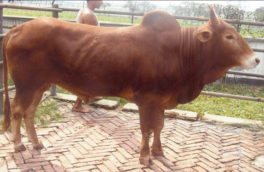 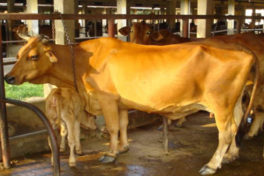 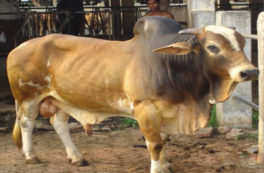 Cows have been traditionally bred more for their ability to provide draft power for agricultural purposes other than for meat, leading to a large proportion of local breeds to have developed humps over the generations [5]. This has led to less of a focus on meat and milk production over the ages, which in turn had led to the recent crisis of beef shortage since the majority of supply was being met from the neighboring country. Today, most farmers now rely on alternative sources of power as the availability of tractors and other mechanized farming tools has reduced the need for manual power.

Soon after the war of independence, the Directorate of Livestock Services started an artificial Insemination program to crossbreed Australian Friesian and Jersey bulls with local breeds to enhance milk production in the country, however, only recently have efforts been taken to do the same for meat production, which answers the question previously posed of how Bangladesh was able to solve the crisis of beef shortage in the span of just a few years.

The American Brahman is a result of 266 bulls and 22 females imported from India to the United States between 1854 and 1926. Since then the breed has been selectively bred for meat production, making it the ideal breed for meat production. In comparison to other breeds the American Brahman is able to utilize low quality feed, withstand a wide range of temperatures, and consistently maintain a higher feed to weight ratio than most other contemporaries [5]. Overall this makes the breed ideal for meat production in Bangladesh when cross bred with local species. 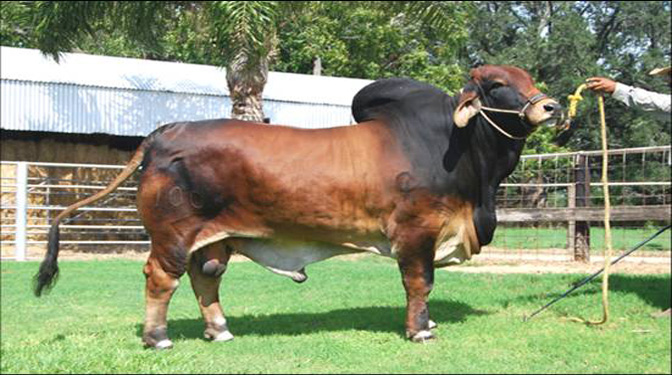 In comparison, some of the better of indigenous cattle breeds such as the Red Chittagong, Pabna, North Bengal Grey, and Munshiganj have a maximum weight half of the Brahman Cow.

Contrary to the developments in recent years, India had yet again looked to start bringing in beef to Bangladesh, but the situation has turned around for the better. Bangladesh has become self reliant in meat production this year and is looking to export to other countries in the near future. Opening borders to readmit cows from India to Bangladesh pose a high risk of hurting the newly developed local industry, as Indian cows are priced much lower than those domestically raised.

According to a recent Ministry of Fisheries and Livestock meeting, the country will have an estimated total stock of 11.18 million cows, buffaloes, goats, and sheep for Eid Ul Adha this year. Though illegal imports of Indian cows has not completely stopped, it’s estimated that in 2018, the number stood at only 92,000 [8]. This year there will be 24 official cattle markets in Dhaka with 14 in Dhaka North City Corporation and 10 in the South. And given the considerable gain in meat production through the use of superior breeds, if the country continues to protect the newly thriving beef industry, the future of beef is bright.