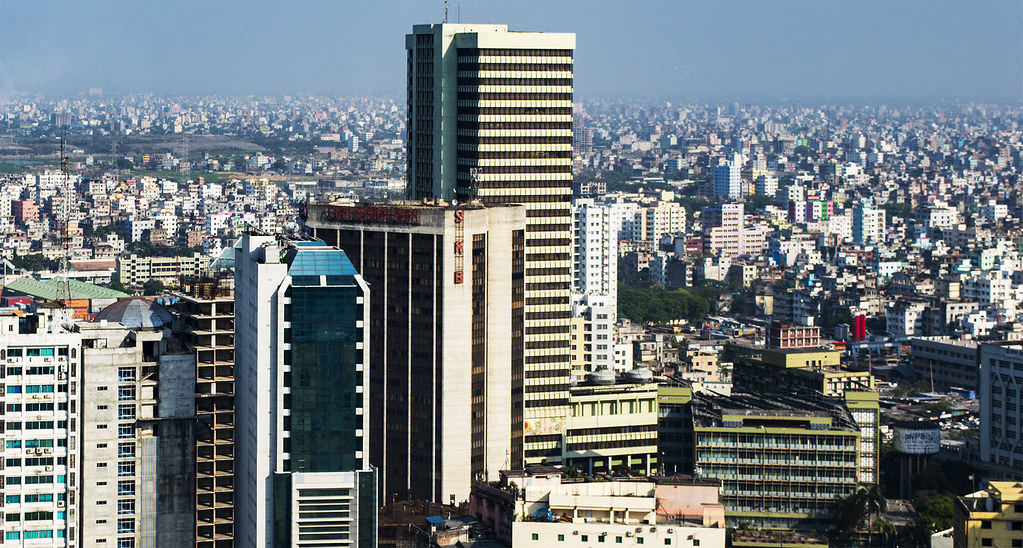 Bangladesh’s economic fluorescence in recent years has been the natural outgrowth of a competitive garment sector and a strong inflow of migrant remittances. The former has been the premier driver behind the country’s growing prominence in international trade and has helped to make Bangladesh a growing regional economic powerhouse. Owing to this, Bangladesh is projected to be the third fastest-growing nation this year and the next by major multilateral institutions.[2]

In the wake of this development, global credit rating agencies Standard and Poor’s (S&P) and Moody’s maintained their long-standing ratings of BB- and Ba3 respectively, affirming a stable outlook for Bangladesh’s growth potential.[1][3]

S&P maintained its longheld rating of BB- for Bangladesh, underscoring a stable outlook for the country while highlighting major fiscal constraints faced by the nation. As a whole, Bangladesh is expected to grow strongly over the next 12 months while its citizens continue to experience rising incomes.[1] S&P’s rating greatly hinges on the level of net general government debt and the performance of Bangladesh’s external profile, namely how export demand fares.[1]

On the other hand, these setbacks are weighed against a strong external profile, arising from a competitive garment export sector, large migrant remittances and substantial engagement with donors. Despite institutional weakness being a hallmark of the country, Bangladesh has experienced consistent economic growth. The tumultuous political environment of the country impedes sound policy-making and constructs barriers to creating a friendly business environment.[1] This has resulted in foreign direct investments (FDIs) being persistently low in the country for decades. Regardless, strikes and politically motivated violence have not been overly disruptive to the economy in recent years and consequently, Bangladesh’s economy is expected to resiliently grow in the coming years.

Low economic development characterized by a GDP per capita of $1900 (2019) is also a major rating constraint.[1]  This low level of income offers a narrow base from which the government can collect revenue, severely limiting the country’s fiscal and monetary flexibility acutely needed to immunize itself from exogenous shocks.1  However, Bangladesh’s GDP per Capita growth rate of 5.9% over the 2013-2022 period indicates strong real economic growth compared to other countries within similar income brackets.

Bangladesh also benefits from low external borrowings. Large migrant remittances and a competitive garment sector have contributed to current account surpluses over the last few years.[1] Large food imports and reduced remittances during the period of slumping oil prices affecting Gulf States–the largest hosts of Bangladeshi workers–created a small current account deficit in 2017 and widening gap in 2018.[1] Since then, however, exports have once again gained momentum, narrowing this deficit gap in the first half of 2019. S&P believes this trend of recovery will continue into the future. While food-related imports are expected to be lower, infrastructure-related imports are forecasted to continue, creating current account deficits around 1.85% of GDP over the period 2019-2022.[1]

Export earnings from the apparel sector and inflow of migrant remittances represent major anchors of Bangladesh’s strong external profile. The latter of the two faces a global threat, namely the maturation of construction in host countries, thus diminishing the need for Bangladeshi workers to work overseas.1 In addition, income tax revenue remains abysmally low while fiscal flexibility remains constricted due to the growing interest burden resulting from the progressive issuance of the costly National Savings Certificates (NSC).[1]

Bangladesh’s low revenue mobilization is the product of a narrow revenue base. The country has only 2 million registered taxpayers out of a population of 160 million people.[1] Government revenue was only 9% of GDP, the lowest amongst all rated nations.[1] While the government has outlined various tax initiatives to expand the tax base, its main proposition is to reform the complicated Ad Valorem Tax (VAT) system. However, the plan has been repeatedly delayed since it was first proposed in 2012. It is expected the government will try to reform the VAT system now that the elections have concluded. Analysts believe it will be done in an attenuated manner, with multiple rates as opposed to the initially proposed single rate. S&P does not expect a significant increase in revenue from these proposed initiatives.[1]

Although Bangladesh tends to run moderate fiscal deficits, a large portion of this deficit is financed by the costly National Savings Certificates as opposed to commercial borrowing. Bank deposits offer 5% to 8% rates to savers whereas NSCs offer between 11.04% to 11.76%. These higher rates have channeled funds away from the banking sector to these NSCs, creating a liquidity crisis in the process.[7] Consequently, this has resulted in the government’s interest expense comprises a large 20% of its revenue.[1] S&P forecasts the change in government debt to average at 4.2% over the period 2019-2022.[1] The issuance of NSCs has experienced a significant increase over the last 5 years and if this trend persists into the future, the government’s interest expense liability is only expected to worsen. 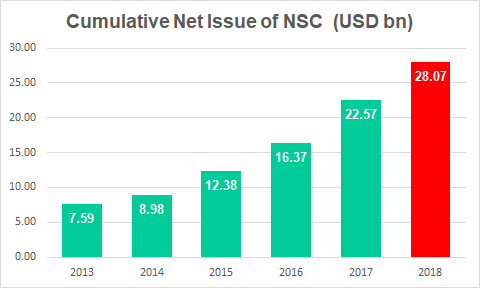 Moody’s Investor Service (Moody’s) maintained its long-standing credit rating of Ba3 for Bangladesh. The agency justified the rating on the grounds of strong economic growth over the past few years which it expects to persist into the future, and strong macroeconomic stability resulting from sound fiscal and monetary policy-making.[3] In particular, the decision to remain within a deficit limit of 5% of GDP has helped to foster moderate inflation and reduce growth volatility arising from pro-cyclical fiscal policy.[3] The effectiveness of policymaking is evidenced by stable economic growth over the last decade, low inflation and the absence of boom-bust credit cycles.[3]

Like S&P, Moody’s also asserts the centrality of Bangladesh’s competitive garment sector and large migrant remittances in framing the nation’s strong external profile. Moody’s believes external vulnerability risks remain low despite the expectation for the current account deficit to persist (mainly due to infrastructure-related imports). On the other hand, Moody’s also touted the government’s weak revenue generation capacity as a major rating constraint. The agency also cited the state of human capital as a major obstacle to improving global economic competitiveness and moving up the value chain.[3] While the country has an abundant supply of labor, it still experiences a pronounced shortage of skilled managers and specialists. Stating that enrollment rates for secondary education and beyond are below that of peer countries, Moody’s does not expect significant improvements in the quality of human capital.[3] 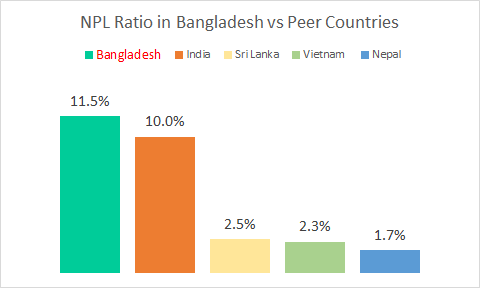 Moody’s put Bangladesh’s banking system on its “negative watch” list despite the country’s robust growth in recent years.[5] The reason behind the action lies in worsening asset quality amidst a backdrop of little to no corporate governance and a lack of capital according to the Asian Development Bank.[8] The rising incidence of Non-Performing Loans (NPLs) has been the main culprit behind the sector’s tumultuous situation. The ratio of NPLs to total loans is the highest in the region at 11.5%, with India coming second at 10.0% and Sri Lanka behind at 2.5%.[7]

According to data from the Bangladesh Bank, total NPL of state banks stood at 28.24% at the end of June in 2018.[5] These state-owned banks are principally surviving on taxpayers’ money. Analysts cited poor lending practices and repeated government intervention as the premier culprits. S&P also echoed the same view as that of Moody’s, pointing out that the banking sector remains small with total assets less than 100% of GDP. In addition, state-owned commercial banks (SOCB) account for 26% of the sector’s total assets.[1]

Both S&P and Moody’s have maintained their longheld ratings of BB- and Ba3 respectively for Bangladesh–affirming a stable trajectory for Bangladesh as it moves into the future. Moody’s stable outlook position implies that a rating change is unlikely to happen in the near future. S&P believes Bangladesh’s strong economic growth impetus will persist, with its people continuing to experience rising incomes. Both agencies cite a strong external profile characterized by low external borrowings, a competitive apparel sector, and large migrant remittances as a cornerstone of this strong position.

On the other hand, S&P and Moody’s mention limited fiscal flexibility arising from poor revenue mobilization as an important rating constraint. Both agencies maintain that improvements in fiscal flexibility are essential to securing a higher rating in the future and that substantial interest expenses arising from financing NSCs could potentially lower the rating as well. Overall, Bangladesh is in a good position as per S&P’s and Moody’s assessment and needs to deal with key structural problems while keeping its premier strengths, namely its external profile, unharmed in order to continue reaping the rewards of growth.