A Nutritious Bangladesh to Ensure a Sustainable Future 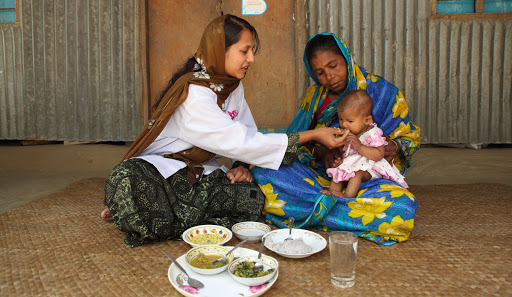 Bangladesh, despite claiming that it has achieved self-sufficiency in food grain production, has not, yet, been able to ensure food security for its citizens. This has been reflected in the Global Food Security Index where Bangladesh ranks 83rd among 113 countries.[2] Food and Agricultural Organization (FAO) defines Food Security as the physical and economical accessibility to sufficient, safe and nutritious food that meets the dietary needs and food preferences for an active and healthy life of the population”.[1] This poor ranking can be attributed to the lack of sufficient nutrition among the citizens of the country.

Nutrition: A Cause For Concern?

The Global Food Security Index is based on three core issues which are, Affordability, Availability and Quality & Safety of food. Among these three, Bangladesh has comparatively ranked worst in Quality & Safety of food at 107 out of 113 countries.[3] A comparison of the average global and regional scores in different indicators in the Quality and Safety issue with the scores of Bangladesh paint an appropriate picture of the current scenario of Bangladesh.

It is evident that a major concern of Bangladesh is the unavailability of micronutrients (Vitamin A, Iron and Zinc) and the poor quality of protein in the general diet. Few of the major concerns regarding nutrition in Bangladesh have been identified.

Undernourished Children:The stunting (underdevelopment) rate, in Bangladesh among children under 5 have been decreasing at a lower rate since 2014 with 39 out of 64 districts having a stunting rate higher than the World Health Organization (WHO) threshold.[4] This indicates that Bangladesh had been making significant improvements in decreasing stunting the early 2010s, it has ceased in the recent years.

Nutrition During Pregnancies: Undernourished pregnancies are rooted in child marriage which eventually lead to undernourished children or maternal death. According to global data, adolescents aged between 15 and 19 are twice as likely to die during pregnancy than women aged more than 20. This has contributed in 38% of all babies being born to be of low birth weight.[5] Moreover, 39.9% of women in their reproductive ages have anaemia.[6]

Unbalanced Diet: The diet consumed in Bangladesh, especially in the rural areas, are often devoid of the necessary nutritional requirements. This is evident in Bangladesh’s abysmal score in the dietary diversity in the Food Security index (Figure 1). According to the Food and Agricultural Organization (FAO) nearly two-thirds of the regular diet includes mostly rice, some vegetables, a little amount of pulses and small quantities of fish if and when available.[9] Meat consumption in Bangladesh is especially low and is mostly consumed in urban areas. Despite a per capita requirement of 43.25 kg meat, Bangladesh only has an availability of 9.12 kg. The meat available is not distributed evenly due to income disparity which has led the per capita meat consumption to be only around 4 kg.[10]

Rise in Obesity The triple burden of nutrition consists of undernutrition (underweight, stunting and wasting), overweight & obesity and micronutrient deficiencies. While undernutrition and micronutrient deficiencies have historically plagued Bangladesh, overweight & obesity have also been on the rise which have resulted in an increase in diseases like diabetes, hypertension etc.

Increase in overweight or obesity also leads to an increase in relevant Noncommunicable diseases (NCDs). For example, diabetes has seen significant increase over the years.

Endeavours to Improve Nutrition in Bangladesh

This improvement in the status of children under five has been reflected in the decrease in their mortality rate.

The change in breast feeding patterns on children have contributed to this improvement with an increase of 10.99% in exclusive breastfeeding between the years 2013 to 2019.[13]

With the needs of the growing population, Bangladesh needs innovative solutions to tackle nutrition deficiency. Different organizations, both public and private are trying to come up with such solutions. Some of them have been identified.

“Bangladesh NutriStar: Nutrition Innovation Challenge”: Arranged with the collaboration of the Ministry of Industries,  Global Alliance for Improved Nutrition (GAIN) and World Food Programme (WFP), this programme connects businesses with innovative solutions to producing or supplying affordable nutritious food to investors. Its purpose is to kickstart businesses which will assist in coming up with innovative solutions to solve the nutrition problem of Bangladesh.[11]

Rice Fortification: Rice fortification is the practice of increasing the content of essential micronutrients in rice and to improve the nutritional quality of the rice.[12] A major issue with the regular diet of Bangladeshi people is the lack of micronutrients in it. Since a major portion of the diet consists of rice, fortification of rice can be a revolutionary solution in dealing with micronutrient deficiency. The Bangladesh Government has plans to introduce Fortified Rice in the Open Market Sale (OMS) to introduce it to the general populace. Currently, Abdul Monem Ltd. produces fortified rice but it has a huge potential in the rice production industry.

Paving the Path for A Nutritious Future

It might seem like Bangladesh is plagued with problems related to malnutrition but most of them could be traced to one core issue: unbalanced diet. Thus, if this can be solved, it is safe to say that a nutritious and healthy population can be ensured. A few propositions regarding how this issue can be resolved has been discussed.

Incentivize Businesses Working With Nutrition: Majority of the organizations working with nutrition currently are non-profit organizations. However, it is also necessary for businesses to join this endeavour. For example, despite the introduction of Fortified Rice, it is not yet popular among the general households due to a lack of proper branding. If business organizations are encouraged to work with such innovative solutions, they can help these reach the general populace by proper marketing.

Sensitize the general population: People nowadays are highly concerned about the quality of food they consume and how it affects their health. But outside of the urban population centres, the general population are highly price-sensitive and still do not value nutrition as a key factor when making food choices. Mass awareness and sensitization campaigns should be undertaken to educate the public on nutrition.

Look for Alternative Protein Sources: Protein deficiency has been one of the major drawbacks in the Bangladeshi diet. However, meat has often been out of the reach of the lower income people. This problem can be solved by finding and funding alternative protein sources like mushrooms, nuts, different lentils, etc. The Bangladesh Agricultural Development Corporation (BADC) can encourage and incentivize farmers to produce such alternative protein sources.

Encouraging Vertical Gardening Throughout the Country: Cultivable land in the country is shrinking rapidly in Bangladesh. Vertical farming can be done in small spaces, even in urban areas. Farming vegetables with micronutrients can help Bangladesh eradicate the micronutrient  deficiency in the diet of Bangladeshi people. Moreover, this will also assist in solving the pollution problem and can help increase household incomes.

Bangladesh has made notable strides in solving the nutrition problem after the independence. Both government and non-government organizations have been doing commendable work in this sector. With proper policies and collaboration from private organizations, this problem can be solved completely within a short time.