Withstanding the Outbreak of COVID-19 in the Footwear Industry 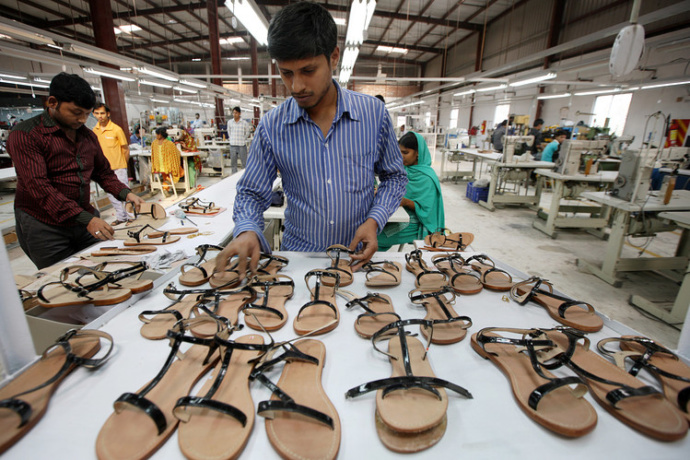 Bangladesh Leather Industry Complementing the Footwear Industry at its Fullest

From 2009 to 2018, the economy of Bangladesh grew at an average rate of 6.5 percent, having exports and remittances as the key drivers behind this growth. Over the years, the ready-made garment (RMG) sector has had a strong dominance over the total export of the country. To sustain high economic growth, and impede the Dutch disease, diversification of major economic drivers is essential. Aside from RMG exports, which account for almost 85 percent of the country’s export basket, [1] leather and footwear combinedly accounts for 3.3 percent of the overall export basket. [7]

Utilizing Bangladesh’s abundant supply of raw materials and labor intensiveness, the country’s leather sector has been meeting the domestic demand, and actively participating in global value chains. According to rawhide industry insights, in Bangladesh, 50 percent of the rawhides are collected during Eid-Ul-Adha. [2] In 2019, ahead of Eid-Ul-Adha, the government of Bangladesh settled the price of rawhide of cows to be BDT 45-50 per square feet inside the Dhaka region and BDT 35-40 for the other parts of the country. Additionally, the price of rawhides of goats was set to be BDT 18-20. Despite the fair price set by the government, the year 2019 was not in the favor of the industry for a price shock caused by a decline in global demand, delay in building the industrial park for tanneries in Savar, being stretched of Leather Working Group (LWG) certification, and the dearth of financing available to tannery owners, resulted to a waste of close to 100,000 pieces of rawhides. [2]

Nevertheless, one of the main reasons behind not being able to be as agile as her neighboring countries is, because of not having the Leather Working Group (LWG) certification. On this note, in 2019, the government of Bangladesh mentioned the continuation of incentivization during the Bangladesh Leather Footwear and Leather Goods International Sourcing Show (BLISS). [3] The leather industry of Bangladesh was developed back in the 1970s, and now according to Leather Goods and Footwear Manufacturers’ and Exporters’ Association of Bangladesh (LFMEAB), one of the major products of the industry is footwear. Considering the vast scope of earning foreign currency, and broadening the country’s market, the Seventh Five-Year Plan of the Government of Bangladesh showed a forecast of at least USD 5 billion of export revenues from the leather sector comprising leather, leather goods and leather footwear by the year 2021. [5]

China, Meeting Most of the Global Footwear Demand Having Vietnam on its Tail

According to 2018 data, the global footwear market was worth USD 227.1 billion. [4] The overall global footwear industry is dominated by the United States of America (USA) as 24.7 percent of the leather footwear is imported merely by them. To meet the demand, the USA heavily depends on China. [5]  In 2018, the USA imported a total of USD 2.44 billion pairs of shoes, and 69.3 percent of these shoes were imported from China, 18.9 percent from Vietnam, 4.1 percent from Indonesia, and only a meager amount from Bangladesh, which is 0.2 percent. [10]

Additionally, with China withdrawing from the global leather goods market, Bangladesh is presented with a huge potential to attract foreign investment into the country through this sector. On top of that, the increased labor cost in the leather industry, and the imposition of a 17 percent import tax in the leather footwear industry have made both the Chinese players and global buyers less interested to focus on the Chinese footwear market. [6]

On the other hand, with the developing Vietnamese economy and increasing consumer awareness of branded products, Vietnamese footwear sector has recorded a strong performance growth. Vietnam stands to be the second-largest footwear exporter in the market. Free trade agreements with the Republic of Korea, Russia, Kazakhstan and Belarus along with an agreement with the EU has boosted Vietnam’s footwear sector. Vietnam acts more like an outsourcing hub for the global supply chains of giant manufacturers, such as Nike and Adidas, which amplifies its export revenues, with this strategy Vietnam’s footwear industry is targeting to reach USD 24 billion in exports in the year 2020. [7] Besides Vietnam, the Cambodian footwear industry has been experiencing growth in this sector. Most of the leather and other raw materials used to produce footwear are sourced from within ASEAN region, and with Cambodia having duty-free access to the EU, the country is attracting foreign investment from countries such as South Korea, and Vietnam. Thus, to outstand and compete in the global footwear market, Bangladesh has to keep up its pace and act strategically.

Bangladesh to Secure its Place in the Global Footwear Value Chain

Though the figure above shows downbeat participation of Bangladesh in the USA shoe market, historical data shows that Bangladesh’s performance is quite praiseworthy as its export to the USA increased by triple digits. [7] In fact, Footwear accounts for more than 2.2 percent of the export earnings of Bangladesh. [8]

Although the financial year, 2018-19 was not satisfactory for the overall leather industry of Bangladesh, the performance of the footwear industry was ample compared to the previous year, where the leather footwear exports increased its value by 7.48 percent generating USD 607.88 million, and the non-leather footwear exports increased by 11.24 percent generating USD 271.53 million.[9] The export performances for July to February of the current fiscal year for leather and non-leather footwear are respectively USD 376.60 million and USD 219.47 million, which is cumulatively 0.5 percent greater than the total footwear export revenue for July to February in fiscal year 18-19. These export revenues generally come from the EU (60-65 percent), USA (17-18 percent), and Japan (6-7 percent), and more than 100 Bangladeshi companies including Apex, Bay and Leatherex Footwear, export shoes.[10]

The Global Footwear Market being Demolished by COVID-19 Pandemic

The recent Covid-19 outbreak has put the industry at peril of great financial loss. The industry players have already started to feel the turmoil of the supply chain disruption. Like many other countries, Bangladesh will be directly affected by the Chinese slowdown through global value chains. It is predicted that Bangladesh will incur a loss of USD 16 million in total directly because of China’s slowdown, and out of USD 16 million, USD 15 million loss will be encountered in the leather industry only.[11] And 69.12% of the footwear export of Bangladesh depends on leather-footwear. Here the major defiance is the contraction of the demand for footwear by our major buyers (both domestic and international). These buyers have no choice here as well because they have to shut down their stores due to a decline in sales. For example, the global giant brand Adidas’s sales have declined by USD 1.1 billion only in greater China. Adidas reported a slump in sales in Japan and South Korea too, of USD 111 million.[12] With industry giants such as Adidas, Nike, and Puma experiencing such declines in sales, it has proven to be considerably harder for nascent companies to sustain in the industry under current market conditions. Specifically, nascent domestic and foreign companies are coming across a major liquidity crunch because of the huge slump in sales.

Footwear factories all over the world, including Bangladesh, are one of the casualties because first of all, manufacturing factories are folding up production in the prevention of the virus outbreak. Secondly, with the decline in sales in the forward market (both domestic and international), the buying orders in the local industry are coming to a halt leading to the entire backward market being hampered. As a consequence, the entire value chain is being disrupted, leaving stakeholders out of businesses, people losing their jobs, and this added obstruction of the footwear industry is adding up to the catastrophe of the global crisis.

Importers and suppliers are here in a battle together where it is a must for them to stand side by side.  Many of the domestic and international brands/businesses are facing problems in supply chains because of disrupted cash flow. These businesses need financial support to get through this crunch period and save their suppliers/factories. Because through saving the factories, jobs of many people can be saved as well.

As the entire supply chain has been disrupted, the local economy is bound to face a huge deficit for raw materials for leather footwear as soon as the pandemic ends. Subsequently, the focus should be shifted towards non-leather footwear for the major parts in order to overcome this obstacle and get back into the global value chain as it might take a considerable amount of time for the tanneries to start functioning again due to shortage of chemicals, rawhides, etc. Given the current situation of the global economy, the demand for footwear, in turn leather footwear, might not rise significantly in the near future. Thus, it will be quite difficult to get a fair price of the rawhides during Eid-Ul-Adha this year. The tannery owners should take preventive measures in their pricing strategy keeping in mind the demand-supply factors. Followed by the recovery from the crisis caused by the pandemic, Bangladesh government could support the tanneries administratively to prompt the process of LWG certification, which can help them in mitigating their financial losses over this period.

Many of the Bangladeshi large footwear companies procure from dexterous individual-owned businesses, SMEs to satisfy the domestic demand. Some of these companies serve the local market through their outlets in different communities. Considering the ongoing crisis, the government can support the SMEs by helping them get access to financial resources in order to keep their business running. For example, applications and all the paper works can be handled digitally easing the process. Additionally, by deferring the interest payment on their existing debt, these small companies will be able to sustain in this economy. Policy support from the government such as deferred lease payments, tax breaks will result as a lifeboat to these drowning entities.

The policymakers need to emphasize on this sector in order to minimize the outcome caused by the pandemic. As the industry is struggling, both national and international regulatory bodies should initiate incentives and take such measures which will ensure a Nash Equilibrium for all the stakeholders of the value chain.