The Ails of Textiles in Bangladesh: Challenges and Possible Amelioration 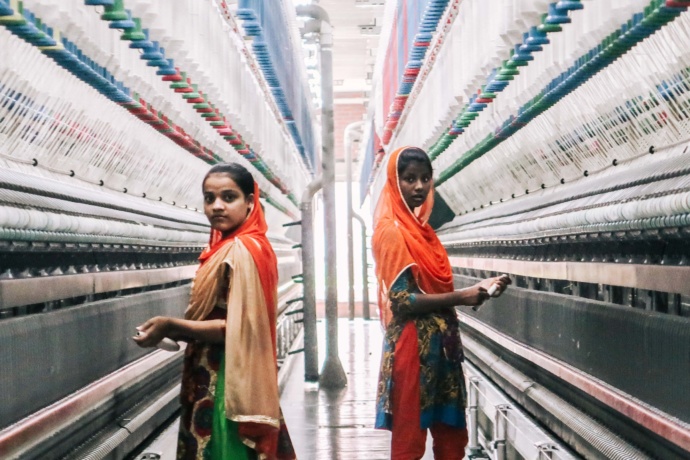 Ready-Made Garments (RMG) Industry of Bangladesh is an extremely important growth-driver and has been since it began to thrive in the 1970s as a consequence of the International Multi-Fiber Agreement. The country’s RMG exports make up the majority of its overall exports, standing at 84.21% as of 2018-2019. The Sector also employs approximately 3.5 million people.[1]

The RMG sector, despite its place in the limelight in driving export-oriented growth in the country, shares a direct, symbiotic relationship with the Textiles Industry of Bangladesh. Textiles directly links to RMG by supplying Work-in-Progress products forward for further processing.

The Primary Textiles Sector (PTS) has over USD 6 billion investment, and generates approximately 13% of GDP.  Around 85-90% of demand for knit RMG and 35-40% of demand for woven RMG is met by the PTS.[2]

From Textiles to RMG

Serving as the first line of value-addition for the production process, the Textiles Industry, which is sometimes called the Primary Textiles Sector (PTS), is heavily reliant on the import of its raw materials consisting primarily of cotton.

Cotton, upon procurement, is spun into yarn and subsequently converted to gray fabric through a chosen technique from a plethora of available techniques (knitting, weaving, crocheting etc.). Finally, gray fabric is dyed, and printed to create the finished fabric which is then sent forward to the RMG factory for further processing and eventual export.

The process is highly labor intensive, and thus serves as a means to make further value addition and cost competitiveness for the RMG and Textile sector.

Textile production in Bangladesh is also extremely water-intensive, using 200-250 litres per kilogram of fabric produced, whereas the global standard is 60-70 litres.[4] This leaves room for efficiency in resource management.

The Primary Textiles Sector in Bangladesh is heavily reliant on the import of raw materials which are then further processed. Evidently, the most important of these is cotton.

The countries which produce the largest volume of cotton across the world, are India, China, The United States, Pakistan, and Brazil.

The following shows cotton distribution across the major producers, and the rest of the world, along with projections until 2028.

Locally, Bangladesh is unable to produce a substantial amount of locally-grown cotton required for its export demand.

The textiles industry has lately suffered an increase in competition as a result of cheap imports of yarn and fabrics from India, China, and Pakistan. These countries are likely incentivised by their respective governments for such trade. China, for example, provides between 15-20% cash return to their exporters when exporting to countries such as Bangladesh.

Yarn-dumping at prices quoted to be up to 30% lower than local production costs by India and China, makes it very difficult for local textiles to compete.[6]  Many textile companies are thus driven out of the market as they are unable to sustain profits. This problem is exacerbated by local RMG businesses through high-quantity imports via bonded warehouses (facing zero-tariff).

Stronger anti-dumping policies will need to be implemented by the government to protect the PTS. In addition to this, there must be greater regulation to prevent cases of smuggling in of yarn and improper Utilization Declaration (UD) Certification in the case of RMG.

While low yarn prices may be seen as a boon for the apparel exporting sector, it creates a problem of not being able to generate sufficient added-value in the case of the final product.

While global consumption for cotton continues to be on an upward trend, there has not been any significant rise in the global production or yield in recent years. World cotton prices are expected to fall over the coming years as a result of the mounting competition from its close substitute in the form of synthetic fibers.

However, 2018 data from the Cotlook A Index showed that prices for cotton on the global market were about USD 1960/tonne while prices for synthetic fibers varied between USD 1,200 and USD 1,700/tonne, giving the latter the benefit of lower price globally.[7] If Bangladesh continues to rely too heavily on the import of yarn, it would mean that it is left vulnerable to such shifts in demand or volatility of prices. This in turn would make it difficult to reliably achieve the growth in exports that it is aiming for in the long run.

With the combination of the shift in focus towards synthetic fibers and the high import cost of cotton, Textiles in Bangladesh struggle to keep costs down.

However, there is a significant scope for Bangladesh to gain from the US-China Trade War.  During the January- July period of 2019, Bangladesh’s apparel exports to the US have seen an 11.53% rise to USD 3.57 billion.[1] Besides the creation of the market opportunity, it is predicted that cotton prices will fall globally as a result of the supply glut. Domestically, PTS can benefit from lower priced imports.

In the long run, Bangladesh can benefit from diversifying its sources for such a crucial raw material so as to protect itself from any sudden exogenous shocks in supply.

Sourcing from Africa shows considerable promise and establishing trade agreements for future import of cotton from Africa may work to Bangladesh’s favor and help distribute the large shares held by India and the U.S.

Over the years, the Textiles and RMG Industries have seen several wage hikes for workers. The minimum wage now stands at BDT 8,000, implemented at the end of 2018.[8] Such hikes raise production cost significantly.

The unprecedented industrial disasters in the forms of the Tazrin Fashion Fire of 2012 and the Rana Plaza collapse in 2013 had sparked global outrage and resulted in the formulation of several programmes to ensure and regulate workplace safety and due diligence, and train labor on safe practices while educating them on their rights.

The most notable included “The Accord for Fire and Building Safety” and “The Alliance for Bangladesh Worker Safety”, both regulated by large international brands and trade unions. These programmes have repeatedly imposed mandatory remediation for factories unable to meet required safety standards and have enforced greater budgetary allocations on compliance with safe practices and ethical operation.

A logical step for an industry with a key focus in physical value addition is gradual automation. This is expected to improve worker productivity and raise the value of the work-in-progress stock going forward to the next stage. Bangladesh currently has low worker productivity in comparison to its main competitors in Textiles and RMG.[9]

In the wake of the 4th Industrial Revolution, Sewbot technology is being adopted by the main players in the apparel market such as China and India.[10] This new technology has allowed for much greater rate of production, autonomous fabric mapping, sewing, and has opened an opportunity to benefit from economies of scale, lowering labor-intensity significantly for associated industries.

Chinese manufacturers such as Tianyuan Garments Company and Raymond in India have commenced operations using SewBot already, bringing down their costs to rival even the cheapest international markets.

According to a Centre for Policy Dialogue (CPD) study, only 21.25% of sampled enterprises in Bangladesh were found to have advanced technology levels in their factories. Each production line of SewBot technology requires approximately 4 people to supervise and operate it, however their skillsets are more versatile than the average individual employed in Bangladeshi Textiles. Bangladesh has a difficult challenge ahead of it if it is to upskill labor and adopt such technology.

There is also a legitimate cause for concern as to how automation may adversely affect worker employment in the sector. A CPD study showed that female worker participation in the Textiles and RMG sector combined, fell to 60.8 percent in 2016 from 64 percent in 2015.[11]

The main reasoning behind this according to the sample was that women were perceived by employers to be less capable of handling machinery. Furthermore, it was observed through the same study that automation investment increased after the Rana Plaza tragedy in response to Alliance and Accord’s enforcement of safety regulations. This was perhaps deemed to be an alternative to raising costs through remediating labor issues.

As a crucial component of the RMG & Apparel sector as a whole, The Textiles Industry has sufficient room for productivity gains through stabilizing supply for raw materials, gradually improving worker productivity and embracing automation. These benefits are sure to carry forward to the RMG sector and help proliferate economic growth in the future.