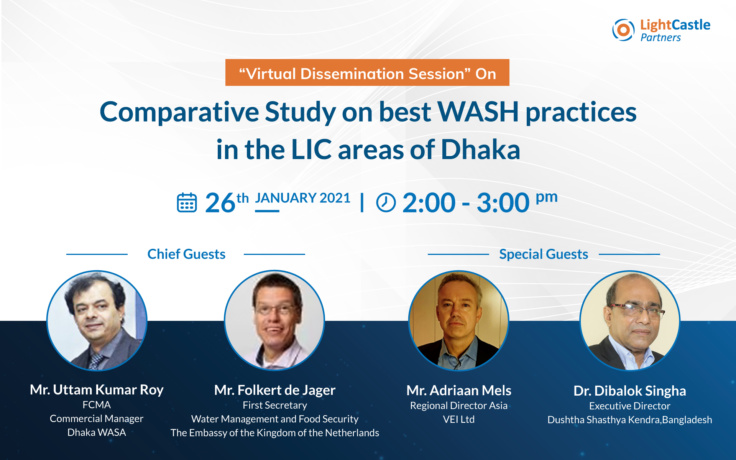 Recognizing the importance of collective knowledge and lessons learned, LightCastle Partners (LCP) was commissioned by VEI Ltd (as part of the Water Operators Partnership with Dhaka WASA) to conduct a comparative study to identify the feasibility and sustainability of the various WASH Services Delivery models that are being used for water provision to LICs in Dhaka city.

According to Mr. Uttam Kumar Roy, one of the key problems identified by DWASA in terms of working in the LIC areas of Dhaka is that of land ownership. The land on which LICs are built are commonly owned by other government bodies and DWASA as an autonomous institution cannot enter the area without permission. With the objective of becoming a pro-poor people organization, DWASA partners up with the local NGOs to provide water services to the low-income communities of Dhaka city. Although DWASA can work in the LICs formed on publicly-owned lands, it is restricted in its options for delivering water to informal settlements on private lands, which limits their ability to achieve full coverage.

Dr. Dibalok Singha from DSK, one of the most prolific implementing organizations in the LIC WASH sector of Dhaka, believes first and foremost that a progressive tariff approach should be advocated for the water services in the LICs. Additionally, in order to support and strengthen the position of the CBO, policy engagement and a strong environmental and operational framework are both crucial. Dr. Singha furthermore emphasized on the importance of the involvement of the marginalized communities in the projects for having a significant impact in their respective LICs. In particular, women’s participation in leadership structures is critically important as they are often the key decision makers regarding water issues in their homes and communities.

Dr. Adriaan Mels and Mr. Folkert de Jager both emphasised on the urgency of models to learn from the successes of one another and subsequently using their relative strenghts to derive strong, uniform models for application across Dhaka city. They also remarked on the key finding from the study that projects with ongoing financial and technical support from partner organizations performed significantly better than projects with elapsed support. LightCastle Partners is of the opinion that deriving a single uniform model by building on the strengths and weaknesses is not as straightforward as picking and combining the best of each model, given the large variances in operational structure and choice of technology. Rather, multiple models should be kept in consideration depending on the context in a particular LIC. For example, the commercial models seemed to be better suited for more affluent LICs in Dhaka city. A follow-up study may well be necessitated to iterate and then pilot a set of potential “improved” models for service provision in LICs of Dhaka city prior to finalization of a set of uniform models prescribed by DWASA.

In addition, there still remains a huge number of LICs which are unserved by legal water services. On the other hand, there are over 400 registered LICs with legal water service provision and with a cumulation of the resources from the dozens of sector stakeholders in the fray, and a “collaborate-not-compete” attitude, the sector stakeholders can realize significant economies of scale and avoid costly duplication of efforts. This can free up resources that can be used by these stakeholders to extend support to completed projects beyond their project horizon and ensure sustainability. Sector stakeholders would also be wise to take a far-sighted view of their projects and undertake a comprehensive, long-term risk assessment to ensure that their projects are sustainable and deliver value to beneficiaries for the longest possible period of time. Mr. Uttam Kumar Roy also alluded to insurance as a possible risk mitigation strategy for project financiers.

The session concluded with a commitment for increased networking and knowledge exchange among sector stakeholders with an eye towards continuing the critical discussions surrounding the improvement of water service provision in LICs.

The report can be accessed here.