Cox’s Bazar Airport: Taking Off Towards A New Horizon 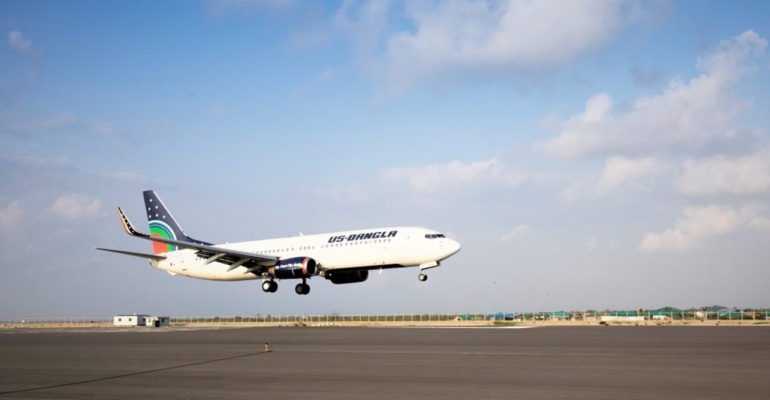 When the entire nation was under strict stay-at-home regulation, construction activity of almost 77 projects was taking place day in day out in Cox’s Bazar, the longest sea beach in the world. The mega plan intends to develop the south-eastern district of Cox’s Bazar keeping in mind precedents like Hong Kong and Singapore. Among these projects, one of the biggest is the construction of the Cox’s Bazar airport consisting of a maritime runway, the first of its kind in Bangladesh. Prime Minister Sheikh Hasina inaugurated the project on August 29, 2021, aspiring Bangladesh to be a communications hub for the entire world [1]. The Civil Aviation Authority of Bangladesh (CAAB) came in contract with the Chinese joint venture Changjiang Yichang Waterway Engineering Bureau (CYWEB) and China Civil Engineering Construction Corporation (CCECC) on February 9 this year to complete the project by May 2024.

One of the integral concepts of this airport is that the world’s largest planes could land here without any difficulty for refueling as well as attract tourists from around the world. Bangladesh was ranked 120th out of 140 nations in the Travel & Tourism Competitiveness Index published by the World Economic Forum in 2019 where total international tourist arrivals were estimated to be at around 125,000 and the total share of the Travel & Tourism industry in the nation’s GDP was a mere 2.2% [2]. This draws the grim picture of the country’s tourism industry where this USD 185 million project glimmers a light of hope. The plan aims to upshift the local tourism sector by creating scope for business and convenience of travel which will have multiple spill-over effects in the community. For example, increasing local employment by giving rise to more developed recreational projects, and shifting employment towards the tourism sector, creating a better trade route followed by decreasing export costs and gaining foreign investment with India, China, and parts of Myanmar already willing to invest in Cox’s Bazar and altogether extract a huge monetary outcome to include into the nations GDP [3].

Why is the new airport being built in Cox’s Bazar? Mostly because the geography of Cox’s Bazar has many untapped potentials which the government aims to extract. The people of this coastal region are prone to drastic climate changes and have been adjusting their lives since independence. The 2016/17 Household Income and Expenditure Survey (HIES) estimated the adult illiteracy rate in Cox’s Bazar at 47%. Although primary school attendance is at 91%, this figure drops to 57% for secondary school. This region is dealing with several economic challenges, with approximately 33% of the population living below the poverty line and a significant influx of Rohingya refugees from neighboring Myanmar [4]. Despite having latent potential in the tourism, manufacturing, construction, agriculture sectors, Cox’s Bazar has not been under any notable infrastructure scheme until now.

Due to its resources and ethereal beauty, Cox’s Bazar was placed 77th out of 440 natural sites in the New Seven Natural Wonders of the World Competition in the years 2007 and 2008. About 1.5 million tourists visited Cox’s Bazar in 2015 and 95% of them were local tourists [5]. The new Cox’s Bazar airport is supposed to bring in more international tourists and investments bringing an upward shift to the economy of this region. To adapt to that change the education penetration in the community has been higher in recent times and people will be demanded to reskill themselves in specific fields to flourish in the new economy of Cox’s Bazar. The illiteracy rate specified before is expected to lower further soon. The government’s mega plan enables the locality to grasp how much potential this coastal region innately bears.

Apart from driving socio-economic change in the district, the airport is an indispensable part of the mega plan because it will complement the other projects as well. Currently, Cox’s Bazar is abuzz with a multitude of projects like the modern airport, the rail line, the 1200MW power plant, the Single Point Mooring (SPM) with a double pipeline, Sabrang Tourism Park, and an economic zone, opening gradually by 2023 and triggering a change in the landscape of the district.

The imminent opening of the Matarbari deep seaport will turn the Maheshkhali economic zone into an island-based commercial hub. The deep seaport is expected to assist in handling rising volumes of exports and imports with ease releasing pressure from Chattagram port. The expansion in port functionality will be able to accommodate a four times higher number of ships than Chattagram port as the new channel will allow bigger vessels with a capacity to carry up to 8,000 TEUs (twenty-foot equivalent units).

The Matarbari Power Plant and the Installation of Single Mooring (SPM) with Double Pipeline project have also been devised recently. The power plant is supposed to generate a total capacity of 3,600MW. The SPM project is built for oil-carrying mother vessels to come to Kutubdia island as they cannot dock at Chattogram port due to low navigability.

In addition to these projects, three eco-tourism parks at Sabrang will attract more tourists and the airport will ameliorate the travel time even more. The Sabrang Tourism Park will have many tourist attractions such as a five-star hotel, ecotourism, marine aquarium, sea cruise, designated area for foreigners, Saint Martin’s travel arrangements, floating jetties, park, eco-cottages, underwater, and floating restaurants. The Naf tourism park will have cottages of similar fashion like Singapore and Maldives [6]. Currently, Bangladesh is ranked 133rd in the Tourist Service Infrastructure ratings out of 140 nations [7]. This expresses the grim picture of our infrastructure in terms of tourism. However, by building the new airport along with all the other megastructures the rankings are also speculated to increase as well.

Bangladesh Economic Zones Authority (BEZA) establishing a 4,000-acre economic zone at Dhalghata inn Maheskhali can also be assisted with the new airport making it easier to transfer products at lower costs. The new international airport will create multiple spill-over effects in all industries through the new projects driving Bangladesh’s position in the global economy to newer heights.

The imminent airport could be the silver bullet for the impoverished community living in Cox’s Bazar, bringing changes to local education, employment, encouraging people in SMEs, and enticing more workforce in the tourism sector. After the recent runway expansion reaching around 10,700 feet, the airport can now carry any plane around the world. This will be a groundbreaking achievement for the local agriculture, manufacturing, tourism industries, and sectoral development inside the coastal district.

The United Nations World Tourism Organization (UNWTO) addressed marine tourism related to SDG-14, which ensures benefits for host countries from tourism activities through sustainable use of marine resources. According to their data, marine tourism consists of 6-7% of world employment. The new airport will be the country’s move towards achieving SDG-14. Tourism alone can contribute to creating employment opportunities, improve the capacity of the local communities, develop local supply chains, and promote local cultural heritage. The impact of the airport will change the way people think in these areas, making them more progressive towards setting up their businesses and investing in local SMEs, small hotels, and restaurants. The increasing number of resorts and hotels will include begetting newer employment. Also, the proposed recreational places like Sabrang, Naf, and Sonadia will reach their full capacity to entertain people when the airport brings in more domestic and foreign tourists. In 2019, the travel and tourism industry contributed around USD 5,937.5 million which is around 2.2% of the total GDP. The numbers can reach greater levels with the new airport. Moreover, out of 140 nations in terms of the Air Transport Infrastructure index 2019, Bangladesh is ranked 111th. These ranks shall also see the light of day sometime soon through the achievement of the international airport. In Asian Development Bank’s research on marine tourism for sustainable development in Cox’s Bazar, respondents reverted to their survey positively, emphasizing that marine tourism development will bring economic benefits by creating employment opportunities, developing livelihoods, helping with fishing activities, and providing economic well-being for all. The research highly agreed on the fact that marine tourism will develop the livelihood of the poor by generating more jobs and increased investment in the local area [5]. Moreover, this airport will be a transit route and a refueling hub for international airplanes. This will allow tourists a short visit to the world’s longest sea beach.

Provisional data from the 2017 Labor Force Survey shows that 41.78% of workers are in the agriculture sector (crops, livestock, fisheries, and forestry).

Moreover, in terms of fisheries, 6% of all domestic captures are from this coastal region.   This is especially important for sea-captured fish, where Cox’s Bazar represents nearly 22% of the national catch. The fish collected in Cox’s Bazar is of high economic value and unique because of the district’s geographical location, characterized by channels such as Kutubdia and Maheshkhali. Notably, the saltwater of the area is appropriate for the cultivation of various types of fish. If the new airport can be used to increase fish export, the demand for employment in this sector would rise as well. Although the construction sector is more reliant on consumer demand, the demand for employment in the construction sector will also be on the rise assuming a rapid economic growth of Cox’s Bazar due to the impending megaplan. The airport will have an indirect impact on employment here as well. The tourism sector is thought to be paramount among all sectors. The new airport is also as right as rain for Sabrang, Naf, and Sonadia tourism parks. It has been estimated that with the help of the airport an influx of tourists can be expected which will generate almost 11,000 jobs. The Naf tourism project is also capable of generating around 12,000 new jobs as well. The total project is capable of catering to around 50,000 people [6]. The sector makes significant use of low-education labor, which means it could absorb a larger volume of low-skilled employees.

The new aviation route will improve the export industry of Bangladesh. It is also supposed to earn a hefty foreign investment from countries like India, China, Thailand, Parts of Myanmar, etc. China has pumped in more than USD200 million for various works here already. Foreign investments to set up international hotels and resorts, manufacturing industries, investment in fisheries like shrimps and crabs, etc. now seem auspicious. It is yet to estimate how much the costs of exports will come to, but the neighboring Matarbari deep seaport is expected to reduce export-import costs by 15%. With imports for Bangladesh, most of the mother vessels dock at Singapore, Colombo, Hong Kong, or Malaysia, and smaller lighterage vessels carry the cargo to Chattogram port. Similar to that, the airport has the potential to ease exports in manifold ways as well. Every project in this versatile region complements the other. Numerous projects are in progress in the southern part of the country which indicates that the country will receive a higher GDP from this part. It will reduce pressure from the capital of the country in terms of employment and business. Cox’s Bazar airport is only a manifestation of the huge plan of developing the southern region of Bangladesh.