How Mobile Technology Pans out Across the Globe 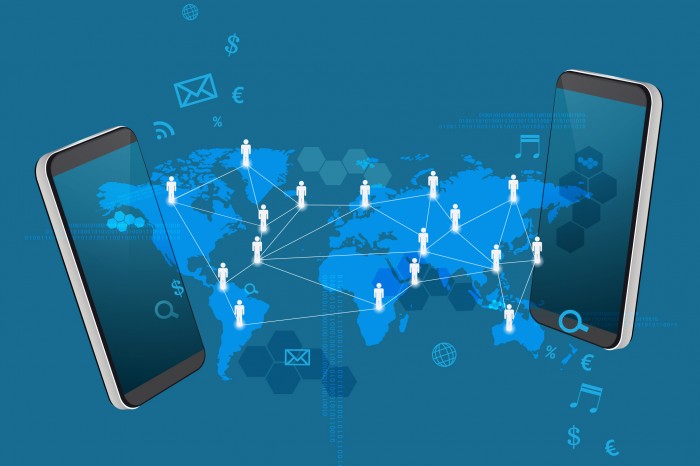 The write-up has been prepared based on the research conducted by Ericsson, a leading provider of communication technology and services, in their annual- Ericsson Mobility Report.

The mobile industry is changing

The global mobile phone subscriptions is growing at the rate of 5% every year, and the current number already exceeds the world population. Mobile data traffic is increasing at an even faster rate, with 120 new mobile broadband subscriptions being added every minute. People are becoming increasingly interconnected through their phone, and the rise in the number of mobile and mobile broadband subscribers is changing the industry’s face, and have let the operators to try out new things. The growth in mobile subscriptions, mobile broadband subscription and increased data usage is causing the mobile data traffic to grow, with 65% increase in the last one year alone. There are, however, large difference in traffic levels between markets, regions and operators.

GSM/EDGE-only subscriptions is currently the largest share of mobile subscriptions, but this technology is already being replaced everywhere by WCDMA/HSPA. Mobile broadband is mostly in smartphones, which for many people is the first gateway to internet.

The demand for WCDMA/HSPA is driven by increased demand for internet access and the growing affordability of smartphones. LTE was first offered less than 6 years ago but since then demand for an enhanced user experience and higher network speeds has driven its uptake to 1 billion subscribers.

Even though the number of subscribers is increasing across all regions, the pattern of increase varies widely depending on the concerned location. Subscriber penetration is low in the Middle East and Africa, and is expected to grow rapidly. The regions like North America already have high subscriber penetration and are expected to experience slower growth. But the difference in the technology used varies widely, as shown in the image below. Mobile subscriptions in Middle East and Africa and Asia Pacific are mainly GSM/EDGE-only, while in Western Europe and North America the majority are WCDMA/HSPA and LTE. 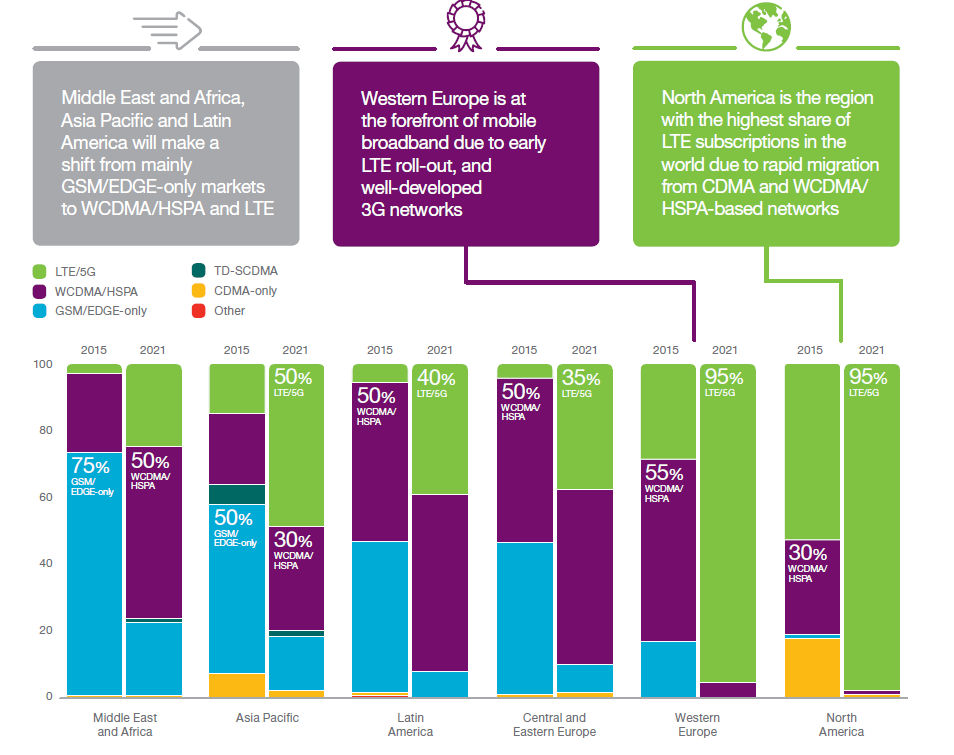 In a study, 82 percent of Android users and 73 percent of iOS users selected a smartphone with the same operating system when switching to a new device. This is not the case for Windows phone users – around 60 percent switch to Android smartphones and 15 percent to iOS smartphones, while only around 20 percent switched to a new Windows smartphone. So the majority of smartphone users (other than Windows phone users) remain loyal to their OS. Each time a new iOS device comes out the iOS loyalty rate increase and the Android loyalty rate takes a dip. And each time an average subscriber updates his smartphone his consumption of data increase from 20 to 45%.

In 2021, 95% data traffic from Western Europe and North America would be because of 4G. Other regions would still be using mostly 3G, except for Asia Pacific which is expected to have the second highest 4G penetration rate at that point (50%). Asia Pacific will also generate 40% of total smartphone traffic. Total mobile data traffic is expected to rise at a compound annual growth rate (CAGR) of around 45 percent, which includes 11 times growth in smartphone traffic.

As more countries adopt 3G and 4G networks the cost of setting up the infrastructures will go down. And with more people using such networks mobile phone manufacturers will shift to producing devices with higher network capabilities. 5G networks are expected to be commercially deployed in 2020, but is likely to be embraced much faster than previous networks. But till 2021 this acceptance will happen in the developed nations.

The Internet of Things

The number of cellular connected devices (physical objects that have IP stacks, enabling two-way communication over network interfaces) is expected to reach 1.5 billion in 2021 from only 400 million now. LTE-connected devices will also grow in number as the costs get lower. In total, around 28 billion connected devices are expected by 2021, of which more than 15 billion will be connected M2M and consumer electronic devices. This increase will be driven by falling costs of modems and growth of applications and business models.

The possibilities are limitless. IoT can lead to new smart technologies which can reduce the global carbon footprint. The improved ICT could help reduce global GHG emissions by up to 15%. 5G can open up new frontiers, like changing the urban traffic scenario.

Ericsson has carried out a test which shows that it is possible to reduce the number of buses on the road by 15% by coming up with models after analyzing traffic and passenger. The high speed of 5G will allow driverless cars to coordinate with each other and with roadside infrastructures to increase road capacity and at the same time increase the traffic flow. There are many other potential applications.

The things mentioned above are just some of the countless prospects that the growth and improvements in the mobile sector have opened up. The next 6 years should be really interesting if the prospects actually see light of the day, and the world would be more interconnected and automated than ever before.

Research for the write-up has been conducted by Maruf Hassan, Junior Research Associate at LightCastle Partners.