Shipbuilding Industry in a Slump 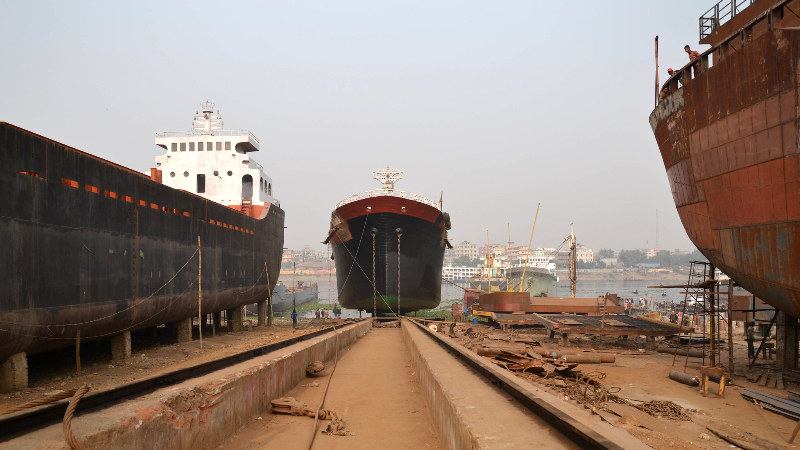 As a country rich with rivers and waterways, Bangladesh has been a hotspot for shipbuilding since the Mughal era. Until recent times, it was better known for its shipbreaking industry. Bangladesh became a ship-exporting country in 2008 when orders for multi-purpose carriers began to come largely from European countries such as the Netherlands and Germany. Bangladesh’s nature as a waterway-rich country enabled it to have strong technical knowledge about shipbuilding in the domestic market which translated well internationally.

However, despite being marked by the government as a strategic industry for growth, the shipbuilding industry has not been meeting performance expectations. A slowdown in the global economy combined with infrastructural limitations has restrained the growth of the industry.

The market for small ocean-faring vessels is expected to grow to $400 billion by 2026.[1] The demand in the global market for ships is directly related to the economy and its growth. As ships are used for commercial purposes, the level of business and maritime shipping needs is where the demand for ships is derived.

Speculation of a global recession approaching in late 2020 and the US-China trade war have dampened demand in the global market, as they impacted business confidence which directly impacts the demand of businesses to buy shipping vessels. The deceleration of the Indian economy also had an impact, as India is one of the largest economies of the Asian region and the world.

As climate change becomes a rising concern, fuel consumption will become a higher priority in vessel selection. The demand for green energy-run ships is also rising, as recently Western Marine Shipyard Ltd., the largest Bangladeshi shipbuilder, has acquired an order for an LNG-driven vessel from Norway.

Large manufacturers in the shipbuilding industry, such as China, Japan, and South Korea, are more focused on the construction of large vessels, and makeup nearly 90% of the ships built annually.[4] The three Asian giants focus on large vessels above 50,000 Dead Weight Tonnage (DWT), and Bangladesh is focused on utility vessels or ships smaller than 12,000 DW.[5] This means that Bangladesh has specialized production, which does not clash with the larger global producers. The demand for smaller vessels has shifted to developing countries as larger manufacturers hit capacity limits and costs are lower for smaller shipbuilding nations.

In terms of order volume, Korea reclaimed the top spot from China. The major shipbuilders in Korea are powerful conglomerates such as Hyundai, Daewoo, and Samsung. This is in stark contrast with Bangladesh, which has relatively smaller companies that are focused only on shipbuilding and thus has limited funds and resources.

The nature of the industry involves construction lasting several years, after which the sale is realized. Thus in years of large ship hand-overs, export values are higher. Over the past 10 years, over 40 ships have been exported, resulting in exports of over $180 million.[6] Major international destinations include African countries like Mozambique and Gambia, as well as countries like Germany, New Zealand, and Pakistan.

As the global market has slowed down, domestic demand has risen to improve the prospects of the industry. Government megaprojects and rising construction have created a need for over 300 vessels in the coming two years.[3] Road congestion, as well as the rising cost of road transport, have further increased the demand for maritime vessels.

There is a lack of a proper governing body to not only provide policy support to the builders but also create regulations and standards. Scarcity of capital, further exacerbated by a lack of affordable funding is an issue that needs to be addressed by the government as well, as it would allow the solution of the infrastructural and technological problems faced by the shipbuilders. Skill development is also an issue as Bangladesh lacks the management and expertise to expand into more sophisticated construction.

Recently, the Ministry of Industries has drafted the Shipbuilding Industry Development Policy 2019, including policies such as a 10-year tax break, cheaper financing, and cash incentives. The government has also been considering the development of a $0.59 billion special fund dedicated to the advancement of the industry.[7] Moreover, with the aid of the Asian Development Bank, the government has trained over 7,500 workers in 3 years to add to the manpower and productivity of the sector.[8]

Infrastructural support is perhaps the most crucial support needed by the industry at this point. Inadequate electricity supply and outdated technology are limiting the growth of the industry on the supply side. Perhaps the most important feature missing in the Bangladeshi shipbuilding industry is the towing tank which would allow hydrodynamics tests to be run, improving the performance of the ships at sea.[2]

The technology-heavy aspect of the shipbuilding industry makes it an attractive focus for Bangladesh as not only is it higher-value manufacturing, as opposed to RMG, but it also improves the perception of Bangladesh’s technical expertise to global buyers which may encourage investment and growth of other industries.

The slowdown in the global economy may prove to be an advantage for Bangladesh as this will shift demand from large carriers to smaller vessels, which will be considered more affordable. As countries like China and South Korea specialize in larger vessels, this is a field with relatively less rivalry. However, if the global recession continues for longer than expected, these large builders may shift their production to smaller vessels as well.

The government is aiming to earn $4 billion from the industry over the next five years.[6] The policy changes that have been proposed must be enacted, and backward linkage facilities such as steel, furniture, and power generation, must be locally produced for lower cost and strong industry structure. Local makers must be supported financially and through more robust infrastructure.

With a crucial multiplier effect on investments and employment, the shipbuilding industry could carry Bangladesh to the next phase of its development as a middle-income country.