The budget deficit has been a worrying issue for the economy of Bangladesh for quite some time now with it reaching an 11-year high in 2019. The government has been looking to decrease this deficit but has seen little improvement in recent years. 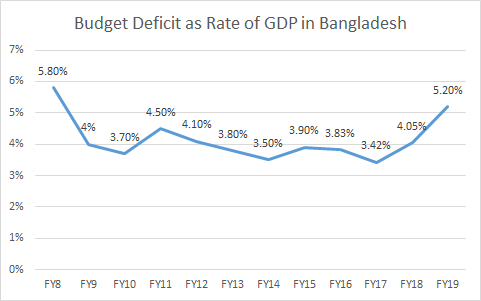 The Unstoppable Rise of the Informal Sector

More than 60% of the total employed people in the world are in the informal economy with 93% of them coming from emerging or developing countries.[2] Thus, it is not surprising that Bangladesh has been seeing a surge in the labour force participation in the informal sector of its economy. 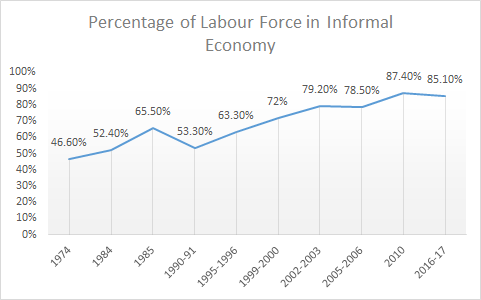 However, even by standards of countries in the same region and with similar economic growth, the labour participation in the informal sector has reached an alarming rate. World Bank data indicates/demonstrates participation in Bangladesh’s informal economy being significantly higher than that of neighbouring economies.[3] 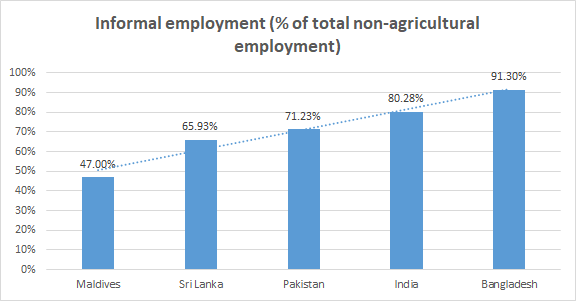 Two notable trends in the informal sector show that the participation in the informal sector is higher in rural areas with women being more likely to participate in the sector.[4] While women employment increasing is a good sign for Bangladesh, the majority of them not being a part of the formal economy is a concern since they might not get legal protection in case of workplace harassment from employers

Percentage distribution of Informal employment by sex and area 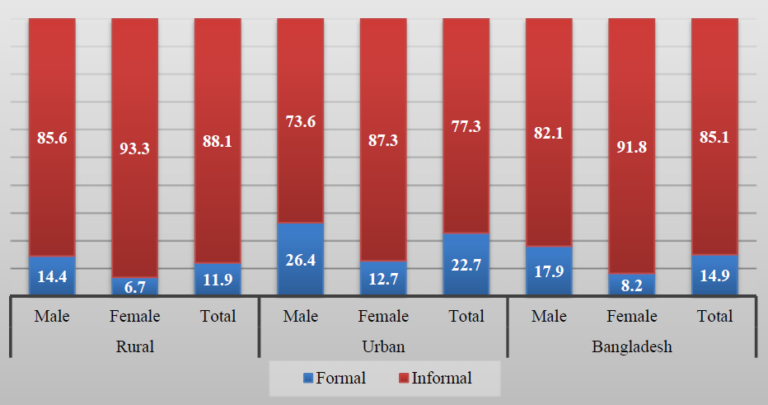 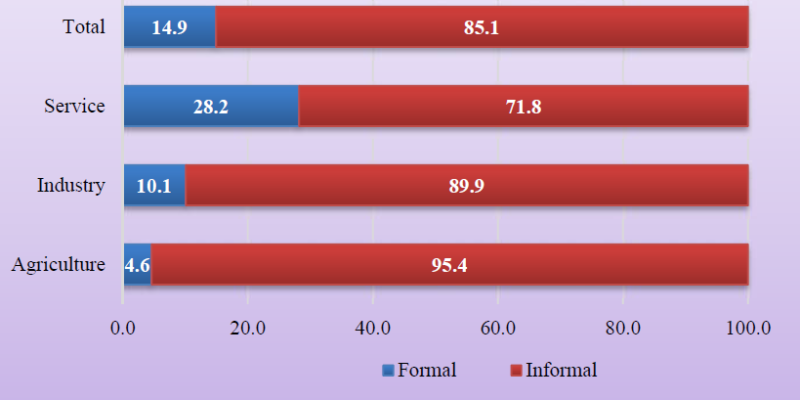 The Budget Deficit: Can Formalizing the Informal Economy Help?

The increasing budget deficit is embedded in low-revenue collection growth (11.2%), and high- expenditure growth (21.4%), driven by Annual Development Programme (ADP) expenditure.[5] The 11 undergoing megaprojects which would cost around Tk 4.75 trillion is a noteworthy contributor to the increasing deficit. 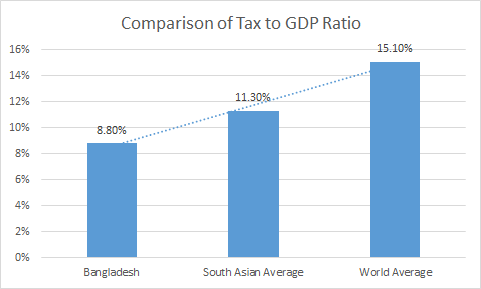 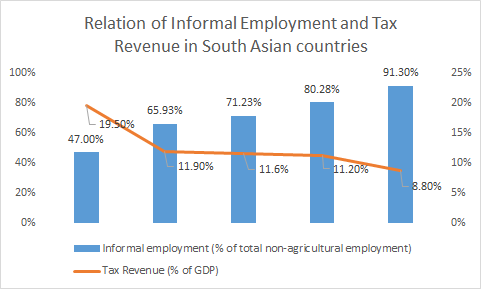 The figure clearly illustrates that a lower portion of the workforce in the informal economy leads to larger tax revenue.

Curbing the Deficit and Beyond

While it is true that an increase in a formalized workforce will lead to more tax revenues, the importance of formalizing informal workers goes beyond that. A few steps which can facilitate in the formalizing of this sector have been identified:

Incentivizing Formalization: According to the United Nations Conference on Trade and Development (UNCTAD), it is necessary to make formalization desirable to the workers currently in the informal sector.[6] The workforce being asked to join the formal economy should be educated that this opportunity comes with a lot of benefits. Being a part of the formal workforce means these workers shall be legally protected by the government. This shall help them from being mistreated by their employers and ensure they get their due for their work. Since a higher portion of the female workforce are in the informal sector, they are at a higher risk of being abused and exploited. Bringing them in the formal sector should be prioritized to ensure their wellbeing.

Moreover, being the part of the formal sector means a large portion of the unbanked population shall be able to use the financial services provided by different financial organizations. This shall help in a more financially-inclusive country and will lead to more entrepreneurial activities across the country.

Easing Formalization: The possibility of having to deal with bureaucracy might deter people from going through the trouble of joining the formal sector. Thus it is important to make the process as less complicated as possible. A great example is the Tax Fair organized by the National Board of Revenue which has made giving taxes a lot simpler than the usual process and has gotten a largely positive response.

Design New Legal Frameworks To Facilitate the Informal Workforce: The concept of having to give income taxes might discourage people from joining the formal sector. New regulations and policies can be designed to make the formal sector more appealing for the workers. These might include a more simplified taxation system, tax-cuts for workers under a specific income etc.

While formalizing the informal sector could be a solution to solving the current pressing issue of budget deficit, it is also inevitable if Bangladesh intends to move up the ladder in world economy and eventually convert to a developed country. This process has to be prioritized to accelerate Bangladesh’s transformation to a developed economy.