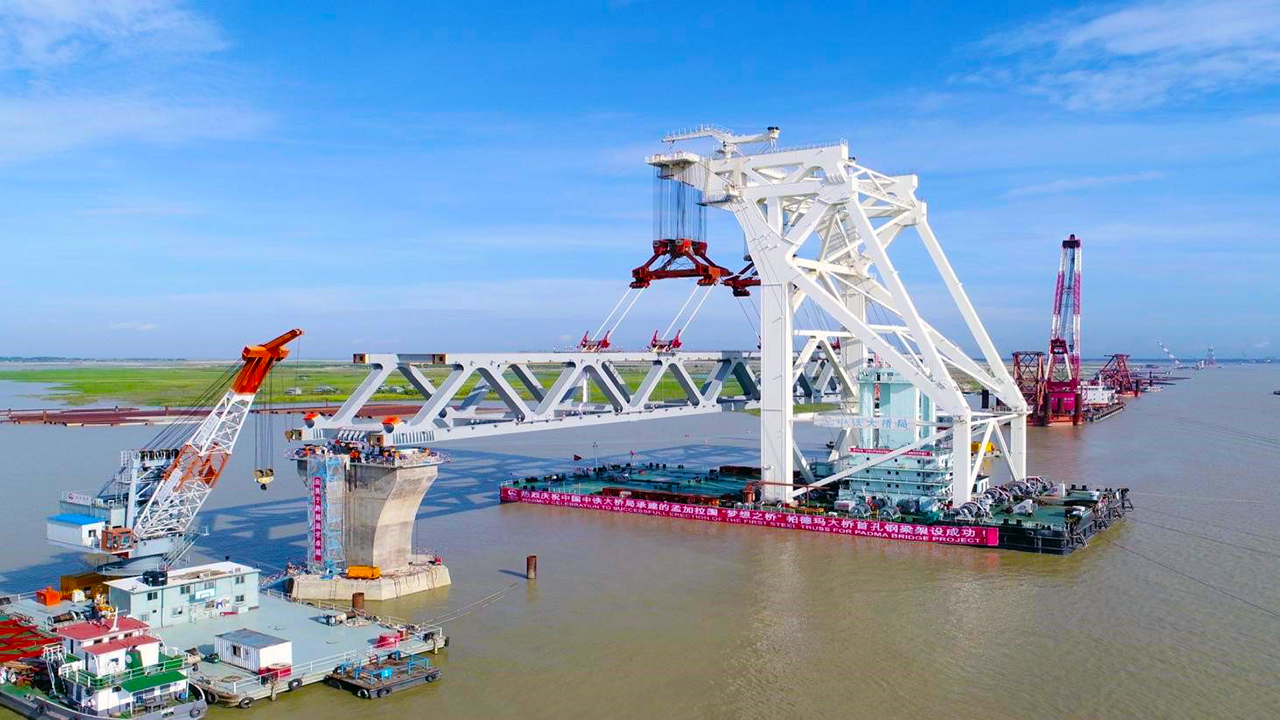 Construction of the Padma Bridge has been a dream for many, especially for the ones born and bred in the southern region of Bangladesh. Such an infrastructure is projected to benefit the economic activities all over the country through a multiplier effect. Bringing huge change to the economy, the bridge is estimated to elevate national GDP by 2% simultaneously increasing the gross product of the southwest by 35%. Likewise, the bridge is expected to attenuate public struggle by generating employment for 1.2% of the total labor force. Bangladesh is currently ranked 100th in international LPI rankings (Logistics Performance Ranking, 2018) by the World Bank, the bridge once fully functioning will abruptly change the economy escalating the ranking to more competitive levels. The Padma multipurpose bridge from the outset is forecasted to transform the landscape of our country to levels beyond imagination.

The Necessity of the Padma Bridge Project

The Padma isolates the southern part from the rest of the country. Despite significant road-transport development in the southern region a bridge was of the essence to pull off the efficiency of such improvements. Struggle in ferry worsen every year with an increasing number of vehicles. [1] The waiting time at ferry points is more than two hours for buses and light vehicles and almost 10 hours for trucks. In addition to that, the river- banks of the Padma are volatile on the south side (Jazeera point) where river width changes frequently leaving the ports seasonally inoperative. The struggles allude to an abysmal local condition when it comes to traveling. Currently, one of the major modes of transportation from Dhaka to the southwest region is the ferry which is not substantial in number. Drastic weather conditions also make them close to in-operable which takes a huge toll on travel time on account of the huge ferry queue caused by disrupted navigability in the river Padma. [2] However, there has not been much projection of the annual economic and man-hour loss caused by the delay at ferry ghats, a TV channel corroborated that in August 2020, toll collection of. 80 million BDT was recorded against a toll collection of 240 million BDT in the same month of the previous year 2019.

There is also an absence of direct roadways through the Tamabil-Sylhet-Sorail-Kanchpur-Dhaka-Mawa-Bhatiapara-Norail-Jessore-Benapole highway which will be resolved by the bridge said the appraisal report of the World Bank. The bridge will create connectivity of roads, railways, and energy transportation easing international connectivity to India, Bhutan, and Nepal by linking to the Trans-Asian highway (N-8) and Trans-Asian railway. The burgeoning network and connectivity have thus far led to creating economic zones, high-tech parks, private industrial cities, and so on. [3]

In 2011, the total annual output of the Chittagong port was 45 million tonnes, which was subject to increase to 70-80 million tonnes in 2020. It will not be feasible for the Chittagong and Mongla port to carry out such a huge amount of trade. With the imminent Payra seaport and Matarbari deep-seaport in the picture, a more congenial way of trading is predicted which will be further promoted by the Padma bridge. At present, there are no direct links between two major southern seaports Mongla and Payra. The Padma will bridge that gap. There are plans to build an eco-park, exclusive tourist zone, marine drive, marine park, sea aquarium, international stadium, hotel, and a mall near the Payra port which has recently been downgraded to a seaport from its previous plan of functioning as a deep seaport.

The southwest region covers 27% of the nation’s population. But the region has been relatively under the radar when it comes to economic development compared to other parts. Climate change has caused problems like losing lands, and businesses leading to migration. The outskirts of Padma also have prevailing poverty due to climatic and network issues. As a result, the proportion of the population living below the poverty line in the southwest region is 5% higher than in the rest of the country. The Padma bridge will remedy these issues. The river training works of the Padma bridge will help subdue erosion, a major issue towards migration. The bridge will cure unemployment, save travel time, decentralize megacities and vitalize marginal economies.

The post-establishment period of the Padma bridge is supposed to bolster our economy in many ways. A series of analyses provide a forecast of what is to come. The long-term road user’s benefit was calculated using the traffic model. This was based on the savings or vehicle operation cost and savings in travel time cost. The estimation stood at 1,295,840 million BDT ($18,512 million) over the 31 years. Moreover, there were simulation tests conducted based on a Social Accounting Matrix (SAM) which signified the indirect impact of the Padma bridge over a 31-year timeline.

Two simulations resulted in a 100% and a 70% investment stimulus felt in the southwest region over a direct injection of $2.1 billion into the regional economy. This would add a value of about 453,670 million BDT over a 31-year period which draws a 10.6% growth. Annually this rate would be 0.33% of the national base GDP. To sum up, if we add the value generated from the traffic model with the estimation of the SAM model the total project benefit is estimated to be 1,749,510 million BDT or 24993 million USD over 31 years assuming 31 years as the full realization timeframe of the project benefit. The first simulation also conveyed that the construction of the Padma bridge would lead to a reduction in annual poverty headcount at the national level by 0.84% and at the regional level by 1.01%. This intricate analysis suggests how big an increment the macroeconomy will receive. [4]

From a foreign trade standpoint, Bangladesh has already started receiving investments for setting up businesses near the construction. Manufacturing businesses, RMG, assembling plants, and storage facilities are most likely to be focused on. New workplaces will add to new employment serving the government’s purpose. Creating strong ties to the two main seaports, exports are projected to grow and so will more export-import zones. The government will gain a substantial amount of taxation and toll post-project completion adding to its revenue. Finally, the bridge will instigate the government to create new international ties to facilitate trade as Bangladesh is soon to graduate from an LDC status.

The imminent establishment of the Padma bridge is supposed to deliver an Economic Rate of Return (ERR) of investing in the bridge of 18-22% per year which is subject to increase. Formerly insular lands have now been accredited as lands of high value because of some form factors.

Transportation will be conducive to the local businesses as the connection from Dhaka to port cities has lessened. For agribusiness, delivery will be a lot faster cutting costs on storage and guaranteeing product quality. Real estate businesses will rebound from previous losses as nearby areas are expected to be vastly industrialized by factories, mega factories, hospitals, universities, and, housing facilities. Hotel businesses in Barisal, shipwrecking industries in the two seaports, and liquified natural gas stations (LNG) industries are planned to be set up far above and beyond after the opening of the bridge. In like manner, manufacturing businesses, RMG, assembling plants, and storage facilities will be the pivot among newly set up businesses. According to BSCIC officials, around 500-1000 factories of various categories are projected to be established in areas surrounding Barisal. The district is expected to contribute 2% growth to the national economy due to industrialization caused by the bridge. Lands that have been considered beyond useful are getting occupied at high rates or leased in nearby areas despite triple prices within 3 years. It has also been recorded that over 100 companies already bought land in Barisal BSCIC areas. Districts like Faridpur, Madaripur, Shariatpur, Bagerhat, Gopalganj, and Khulna are considered focal points for investing by industrialists. Around 10,000-20,000CR taka is expected to be invested within the next 10 years in areas surrounding Barisal according to the Barisal Chamber of Commerce. [5]

The incorporation of both road and rail routes will help transport raw materials from Chittagong and Mongla ports at a cheaper rate coming as an advantage to local businesses. As the bridge sees the light of day, the nation will attract more multinational industries to set up business here as the labor cost will be cheap with communication costs kept at bay. This will also bring a shift to the global supply chain.

With the rise of a myriad of possibilities from the Padma Multipurpose Bridge, there will be a sharp rise in entrepreneurial minds. Employments will fill up in droves. People empowered with new opportunities will be more into small businesses. There will be a rise in trained workers as wages are expected to increase. Better healthcare facilities coupled with lesser commute time will add to better living.

From the inception of the bridge, industrialization might create work opportunities for at least 10 lakh people within five years which will add up to 30-40 lakh employment within the next 10 years in Barisal. Issues like migration shall be reduced as new workplaces will grow on the outskirts of the Padma bridge with growing businesses in Khulna and Barisal. The increased scope of industrialization might result in an increasing number of universities and training facilities in the southwest region. Human capital coming into a developing process, and the proportion of NEET (Not in education, employment, or training) youths will fall.  According to the 2019 Human Development Index (HDI) by UNDP, Bangladesh was ranked 135 among 189 countries. The bridge stimulating economic activity leading to demographical changes will move the country more towards gaining SDG goals.

Diversifying Business for the Southwest Region

The bridge will assist in maximizing farm and non-farm growth possibilities, diversified agriculture in saline-affected parts, and availing inter-country trade between Bangladesh and India. By the same token, it will maximize dairy and fish processing, shrimp business, jute, and textile. By adopting strong supply chains, farmers will benefit from being able to maintain the quality of their perishable commodities as well as lower production costs due to transportation and storage facilities. Export zones becoming more adjacent, export of agriproducts will provide quality assurance. With transport and energy constraints removed, SMEs like small-scale garments, and small-scale export manufacturing businesses will increase. Open to vast opportunities, with increased investment and industrial growth, integration of SMEs and MSMEs will create multiple spill-over effects in generating outcomes. All of these will result in less urbanization of megacities and decentralization of the economy caused by reduced migration. [3]