How can Bangladesh Enforce a More Equitable Workforce? 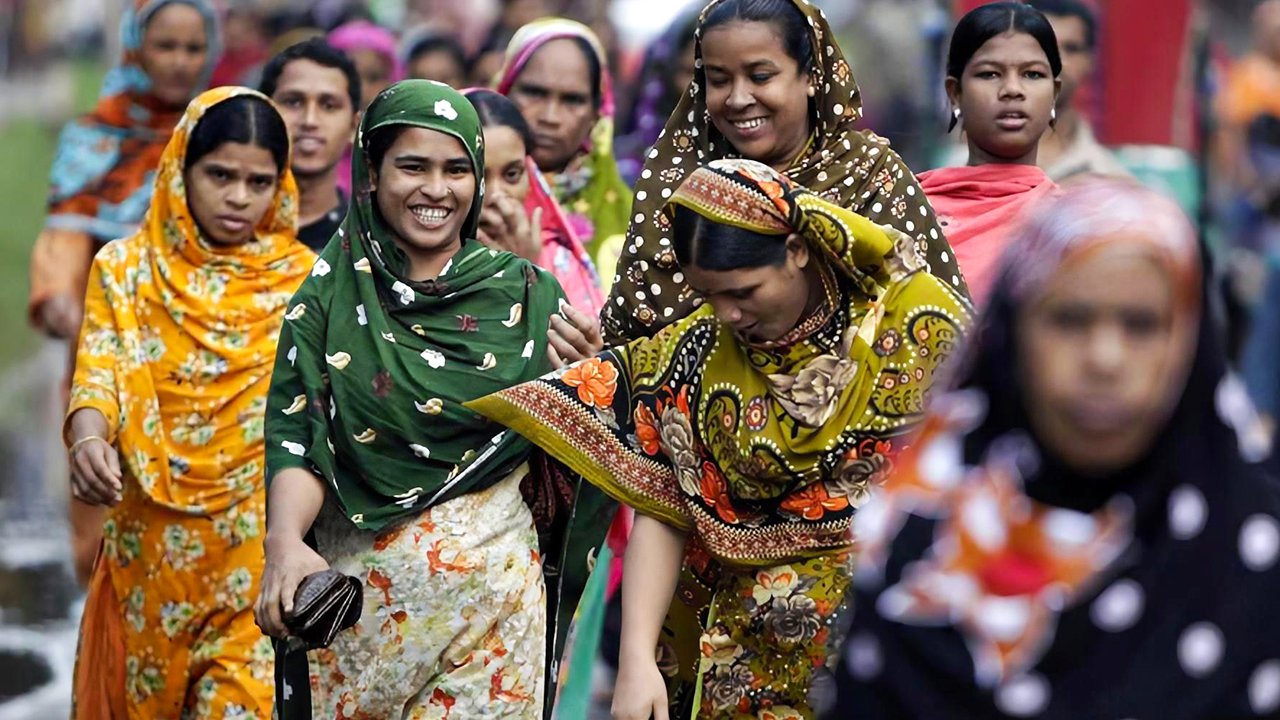 To acquire the status of a lower-middle-income economy, Bangladesh must achieve a threshold of gross national income (GNI) per capita between $1,036 and $4,045.[1] A way forward towards this graduation is utilizing the untapped genesis of female participation in the labor force.

This is because higher participation of females in economic activities leads to a higher ratio of asset ownership and control, accelerates social development, reduces gender and income inequality, and improves child nutrition and school participation rates. It is also deemed that females contribute more to their families and communities than their male counterparts.[2] Female labor force participation is not only a powerful catalyst for economic growth, but also for social empowerment. For example, the Global Gender Gap Report (GGGR) measures gender disparity in countries, by measuring gender parity in 4 key areas: i) Economic participation and opportunity, ii) Education attainment, iii) Health and survival and iv) Political empowerment. [4] According to rankings for 2020, Bangladesh was ranked 50 among 153 countries, with a score of 0.78. [1]

However, a closer look at the report shows that in the 4 categories, Bangladesh was scored the lowest in Economic Participation and Opportunity.  [15] Therefore, it is critical to examine the obstacles to higher female labor force participation rates and possible solutions for such obstacles.

Despite being a Muslim-majority country, the female labor force participation rates in Bangladesh have increased over the last decade by seven percentage points. From 2009 to 2019, female participation increased by seven percentage points from 27% to 34%. [1] Even though the past decade shows commendable female participation, it is still standing below 50%. This rate is still high when compared to South Asian counterparts such as India (19%) and Pakistan (21%), but lower than neighbor Myanmar (49%) as shown in Figure 1.

The Primary sector is associated with generating activities related to the utilization of agriculture, fishing, forestry, and mining. More than half the females in the labor force, 60% [5] of them are employed in this sector, and this also includes the workers specializing in post-harvest activities, cow fattening, milking, goat farming, poultry rearing and, homestead vegetable gardening. [13] This empowerment was made possible among rural women with the help of microfinance from financial intermediaries such as GrameenBank. [13] In addition, BRAC with their Integrated Development Programmes (IDP) provided microfinance to rural women in Hard-to-Reach Areas (Haor), especially in Sylhet and Mymensingh.

The Secondary sector, also known as the Manufacturing sector, is associated with the processing of raw materials, food manufacturing, textile manufacturing in Bangladesh. The secondary sector employs around 17% [5]of the female population and the Ready-Made Garments (RMG) industry is a dominant employer as it employs 2.5 million female workers. Leather also follows RMG in the manufacturing sector, as another key employing industry of women – it has a female labor force participation rate of 53%. [1] Another sub-section of the manufacturing sector – the handicrafts industry – is critical to Bangladesh’s economic growth. For example, the production of handicrafts created employment for women across districts such as Bogra in northern Bangladesh. These products from the industry are popular across international markets and are exported to countries such as Australia, Germany, France, Italy, Brazil, Portugal, Sweden, Denmark, China, India, the USA, and the Middle East. [7]

The second-largest female-employing sector is the Tertiary sector, generally known as the service sector, and it employs 23% [5] of the female labor force. It covers a wide range of activities from commerce to administration, transport, financial and real estate activities, business and personal services, education, health, and social work. This sector was growing rapidly at a rate of 7% but growth was dampened to 4% in 2020 due to COVID-19. [1]

Female Employment in the Formal and Informal Sector

In addition to the Primary, Secondary, and Tertiary sectors, it is critical to examine female labor force participation rates across informal and formal sectors, given the disparity in the latter sectors. The formal sector encompasses employment in institutions as banks, non-bank financial institutions (FIs), insurance companies, capital market intermediaries like brokerage houses, merchant banks, microfinance institutions (MFIs), etc. The informal sector includes contractual workers, self-employed personnel, unpaid caregivers, piece-rate workers, domestic workers, etc. The female labor force participation rates in the formal sector are one-tenth of that in informal – 8% [5] females belong to the formal sector or are employed formally and, opposed to 81% of males who are employed informally. The distribution of informal employment is highest in Rangpur with 95% [5], followed by Rajshahi at 94% [5], as shown in Figure 3.

Analysis of recent statistics demonstrates the female labor force participation rates need to grow at a robust pace, especially in the formal sector. However, before assessing policy strategies to render these changes, the obstacles to growth in the female labor force must be examined. Women in the labor force face challenges preponderantly in the aspects of security, gender discrimination, and societal pressure.

Female participation in both rural and urban areas is still below 50%, as females are often discouraged from entering the labor force by their families. This is, first, due to the preconceived notion that women should concentrate on childcare and household chores – something that needs to be rectified through behavior changes. Second, the lack of safety in the workplace and public spaces stands as an obstacle for rising female labor force participation rates. For example, almost 13% of women reported workplace harassment in the year 2020. In addition, around 1100 sexual harassment cases were reported during the lockdown in March to late July – increasing fear of travel in public spheres. As stated earlier, female participation rates are 34% [1]. One of the leading factors to this stunted rate is that female participant in a 9-5 job face fallouts in various forms. One of the eminent reasons behind the formal employment gap is the lack of childcare facilities available for women. International Finance Corporation (IFC) launched the global ‘Tackling Childcare’ study to gauge the effectiveness of introducing childcare facilities in the workplace. This study evaluated the benefits and costs of providing childcare facilities and the following data was revealed: 23% or 68 of 306 employers are providing childcare, 16% or 51 of 306 employers are planning to provide childcare and 61% or 187 of 306 are not planning to provide childcare. [12]

In addition, the situation for female entrepreneurs is no different, as according to the MasterCard Index of Women Entrepreneurs, Bangladesh ranked at the bottom among 58 nations. [13] Only 7% of the Micro, Small, and Medium Enterprises (MSME) are owned by females, owing to a poor business environment for women. The grounds for this low participation are lack of access to finance, bounded access to Information and Communication Technology (ICT), insufficient access to knowledge of banking and business, and lack of encouragement from society, especially friends and family members. [13]

The Government of Bangladesh (GoB) took initiatives to increase this female participation. The 8th 5-Year plan entails the details on how the GoB would disburse spending to improve school enrollment of females, disburse collateral-free loans to women by Bangladesh Bank, and establish vocational training for women that will allow them to acquire technical skills as well as sewing, embroidery and, agriculture. However, the traditional market does not allow the full implementation of these policies. For example, many male workers would not want to work under a female entrepreneur thus undermining their authority. [4]

In this 21st Century, economies cannot overlook the contribution from female participation anymore. 36% [2] of the GDP contribution in Bangladesh is made by female employees. This figure can increase as significantly as 50% only if inequality, backlash from society, and security concerns are met.

The first step to mitigate this debarring of female participation is to increase awareness in family members of the benefits of having female earning members. Most men, due to traditions, overlook the financial benefits that can be reaped if both men and women work. [16] Alongside, tailored vocational training programs need to be introduced for women that will teach them skills that are not only limited to handicrafts, beauty salons, sewing, and stitching, but cater to IT, marketing, teaching, and leadership building. More educational and training opportunities, such as leadership programs, managerial training, scholarships for courses at universities and business schools, will increase the confidence of females in the labor force, as well as clients and employers.

For female participation rates to increase in Bangladesh, empowerment needs to be engendered along with employment. Projects like the National Skills Development Policy (NSDP) for Bangladesh, the development of which was supported by the International Labor Organisation (ILO), will gradually empower women. The project is working towards reforming technical and vocational education and training (TVET) in Bangladesh, especially to empower women. [2] In addition, the SME Foundation has boosted training programs to encourage self-employment among women. Keeping the global pandemic in mind which led to an upsurge of e-commerce business in Bangladesh, the SME Foundation designed a training program that not only provides guidelines on buying and selling but also on customer servicing and collaborating with partners. [6]

These policies are a synergetic approach to refine and modify the coordination and delivery of skills in Bangladesh according to global standards for the development of the nation as a whole.18 Implementation of such projects in both urban and rural areas would be a well-advised approach to empower women in the workforce and accelerating economic growth.