Supporting the ‘New Poor’- What Could Be The Way Forward? 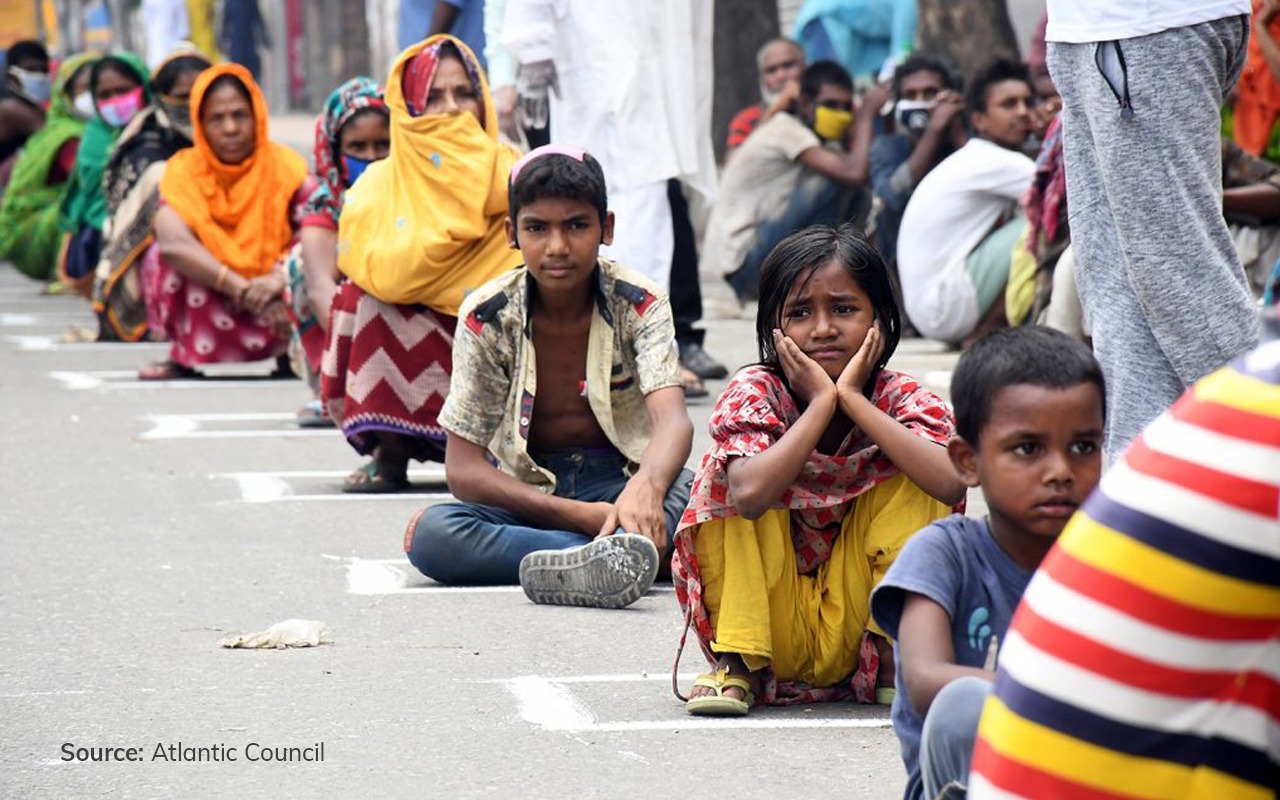 Bangladesh has made remarkable progress in overcoming poverty since independence in 1971. The population living below the poverty line fell to 20.5% in 2019 from 24.3% in 2016 (using the international poverty headcount of $1.9 person/day). [1] Poverty eradication efforts were made possible through a combination of state policies, concerted efforts by the development sector, industrialization, trade liberalization and mobilization of rural labor force (e.g., growth of the remittance workforce market). Around 58% of the urban workforce (aged 15 or older) was employed in the manufacturing sector, according to the Bangladesh Labor Force Survey 2016-2017. Poverty reduction has also been aided by various sectors of the economy such as international remittance, earnings from agriculture and RMG sectors. [2] This has helped the economy to enhance human capital, lower fertility rates, and increased life expectancy, and has helped households to earn more and get out of poverty. However, the threat of recently graduated ultra-poor falling back into poverty has dominated policy discussions ever since the imposition of pandemic-induced lockdowns in March 2020. Government, multilateral institutions, donors, implementing agencies, and policymakers have realized the need to acknowledge this new cohort of poor and are therefore in the process of designing strategies. [3]

Years of Progress at a Glance

Before diving into the importance of supporting recently graduated ultra-poor, it is critical to assess the different measures of poverty. The figure below depicts Bangladesh’s achievement in poverty alleviation in comparison with international poverty headcount rates from 2000-2016.

According to the World Bank, poverty and extreme poverty rates were based on the Cost of Basic Need Approach (CBN) and the international poverty line has a value of US $1.9 purchasing power parity (PPP). The CBN approach represents the level of per capita consumption at which the members of a household can be expected to meet their basic needs in terms of food and non-food consumption.

Over the years, the poverty headcount rate has declined steadily in comparison to the international poverty headcount rate. About 8 million Bangladeshi were lifted out of poverty and 5.6 million out of extreme poverty from 2010-2016. However, the eradication efforts were disproportionately concentrated in rural areas and the majority of advancement took place in rural areas of Bangladesh.

Until 2019, poverty has been gradually declining for 30 years. However, due to the ongoing pandemic, an estimated 60 million urban poor residing in the low-income settlements across different regions of Bangladesh are despondent due to the lack of work opportunities, loss in income, Water, Sanitation and Hygiene (WASH) facilities, inadequate access to healthcare and upsurge in violence against adolescents & women. Furthermore, dissaving and distress selling was forced upon households due to the income-to-expenditure mismatch. The amount spent on food has also reduced substantially. All these led to the emergence of the ‘new poor’ which is relatively a new concept.

It is anticipated that several non-poor households, most likely a segment of the ‘lower-middle class’ and maybe a portion of the mid-middle class before COVID-19 have become ‘poor’ (‘transitory poor’) due to the impact of the pandemic. Furthermore, several households who were ‘poor’ before COVID-19 became ‘poorer’ which led to a poverty gap, and the squared poverty gap amplified. The economic shock induced by the pandemic has pushed at least 24.5 million people to become ‘new poor’ according to a study conducted by The Power and Participation Research Centre (PPRC) and the BRAC Institute of Governance and Development (BIGD). [6]

The study conducted by PPRC & BIGD is a Rapid Research Response to COVID initiative where more than 6,000 rural & urban slum households were surveyed in three phases to comprehend the impact of COVID on the livelihoods of these people. In light of the development of this ‘new poor’ class, the study acknowledged the need to reassess our responses to poverty. As a result of the COVID-19 pandemic, the life & livelihood of the Bangladeshi people have been affected in unprecedented & multifaceted ways. The effects include 896,770 confirmed cases, 14,276 deaths (as of 21 June 2021); [7] job losses, closing down of businesses, the decline in economic growth, and social activities highlighting human distress & poverty further. It is anticipated that people who live hand-to-mouth will lose their purchasing capacity due to mass unemployment and the number of ‘new poor’ will escalate further.

Rethinking & designing of new strategies to help the ‘New Poor’

The pandemic has put undue strain on the country’s fragile health system, education, human development, delivery of essential public services, and social upliftment. If the pandemic persists, it might turn into a deepening human disaster, jeopardizing the country’s development goals, particularly LDC graduation and the SDGs. To mitigate these challenges both government and the civil society stakeholders are rethinking and designing better schemes to help the ‘new poor’ and uplift them from the dire situation.

The government of Bangladesh is collaborating on a project with UNDP to combat the challenges based on the concepts of ‘whole of the society’ and ‘leaving no one behind’ (LNOB) principles. The interventions include socio-economic impact and needs assessments for informed policy-making and optimal programmatic interventions, including identifying the hotspots and the most vulnerable population, inclusive and integrated crisis management and response, and health systems and procurement support. Under the direction of UNRC, UNDP is the technical lead in developing a strong and integrated multi-sectoral early recovery plan for the next 12-16 months, involving all UN agencies.

Subsequently, UNDP initiatives such as the Livelihoods Improvement of Urban Poor Populations (LIUPC) project, Strengthening Women’s Ability for Productive New Opportunities (SWAPNO) project, Access to Information (a2i), and others have been delivering aid and food to marginalized communities at the grassroot level. UNDP Bangladesh has reached a total of 15.05 million individuals through various assistance programs, such as hygiene kits, public awareness campaigns, and amenities. Over 59,000 persons with impairments and over 67,000 people in the LNOB group (minority ethnic, etc.) are covered by the program [8]

After establishing a database through multilayer examination of the individuals who needed it most, the government gave financial assistance to 3.5 million beneficiaries who had become ‘new poor’ as a result of the Coronavirus pandemic. According to a finance division letter, two-thirds of the 5 million ‘new poor’ households in Bangladesh suffering from the economic effects of the coronavirus pandemic got Tk 2,500 each. Millions of people lost their jobs as the government imposed a nationwide shutdown on March 26 to limit the spread of the deadly virus. The government responded by allocating 12,500 million to the 5 million poor households whose breadwinners were laid off. The initiative was made possible under the government-to-person fund which was inaugurated by the Prime Minister on 14th May. According to the Ministry of Finance Bangladesh, day labourers got the lion’s share (51.1%) followed by farmers (12.9%), labourers (9.6%), househelps (6.5%), transport workers (4.7%), and the remaining to others.[9] Few other notable projects that are directed towards the ‘new poor’ are listed below:

A forward-looking response to COVID-19 is crucial

The informal sector accounts for around 40% of the country’s GDP, with the highest contributions in agriculture, fisheries, trade, and industries (micro, small & medium enterprises).[12] The government has aimed to reduce the poverty rate to 12.3% by the fiscal year 2023-2024, however, it is still not stated how the goal will be accomplished. This year, the government boosted its funding for social security programs, but only modestly. The proposed budget allocates BDT 1,076,140 million to materialize the  Social Safety Net Programmes (SSNPs) in the coming fiscal, up from BDT 955,740 million in 2020-2021. Thus, an increase of 12.6% in the budget and this proposal will bring around 1.427 million more elderly citizens, widows, and people with disabilities under the SSNPs. [13] It is critical that the Bangladeshi government, private sector, and development partners all step up together and collaborate to mitigate the pandemic’s effects on both rural and urban populations. To reintegrate the ‘new poor’ back into good and steady jobs, the government and non-governmental development organizations must make a concerted effort. A well-targeted stimulus package can serve as a form of social insurance for these populations in the short run. However, in the long run, substantial portions of the population will require assistance in re-entering sustainable livelihoods. The ‘new poor’ are more in urban slums than the chronically poor, and they work in areas such as informal sectors, construction, and manufacturing, rather than in agriculture. Protecting households from the impacts of COVID-19 will require policies and programs that reach both the existing and the ‘new poor’. This will necessitate government investments in new job sectors as part of a larger strategy to develop a more robust and forward-looking economy.