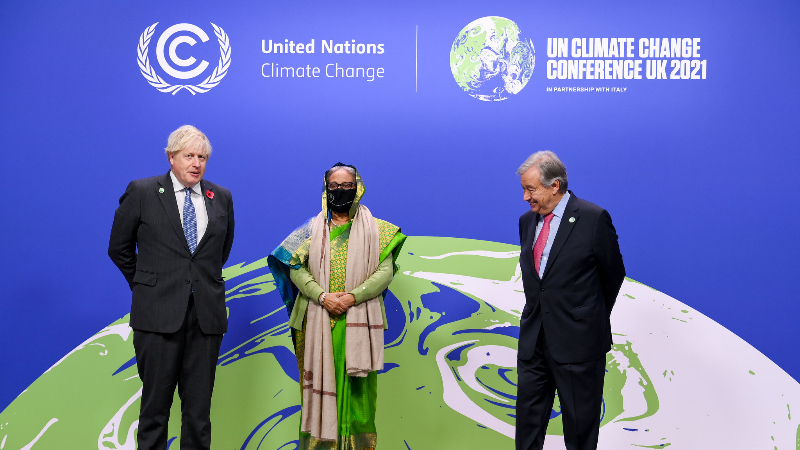 In October 2021, against the backdrop of the increasing climate crisis, world leaders, scientists, and activists joined together at the 26th annual climate change conference, COP26. The summit was held in Glasgow, United Kingdom, to bring global parties worldwide to tackle the imminent threat of climate change. Attended by 197 member countries, this was the largest yet gathering since the Paris Agreement in 2015. The event was surrounded by expectations from the developing countries to the developed ones, with the conjunctive aim to fulfill the pledges to reduce carbon emissions and limit rising temperature levels.

Bangladesh as a country has an active interest in COP26, as it is one of the top countries in the Climate Vulnerability Index. [1] After the Paris agreement, nations worldwide agreed to limit the globally rising temperatures to 2 degrees Celsius. [2] Yet, it proved to be trickier than ever to uphold the agreement. While developed countries can easily shift to a more green economy without a dent in their economy, it would be hard for developing countries to reduce their dependence on fossil fuels. Thus, what remains to be addressed is how disproportionately vulnerable countries such as Bangladesh can transition into middle-income countries without the cheaper energy sources as they navigate their imminent threats from the changing natural environment.

Given the global footprint of the climate, it is imperative that all nations collectively aim to reduce the carbon emissions to half by 2030 to strive for global net-zero by 2050. [3] However, a closer look at past and present emissions reveal a significant divide between the post-industrial countries in Global North and emerging economies in Global South.

By far, the United States of America has emitted almost 25% of the global Greenhouse Gases (GHG). 27 countries of the EU and UK combined emitted 22% of the global GHG. In contrast, countries such as India, Brazil, and Bangladesh have emitted GHG only 3%, 0.9%, and 0.57% respectively. Yet, most of the burden of the immediate threat of climate change is carried by poorer nations in the global south. [4]

This inequity brings to attention the urgency of mitigation and adaptation to the new pact. To adapt to a new clean, accelerated plan of ‘phasing out on coal’, developing economies would need the help of developed countries to provide enhanced support through financial assistance, capacity building, and technological transfer.

According to the Global Climate Risk Index, Bangladesh is the seventh most vulnerable country to climate adversities. Yet, it only contributes almost 0.56% of global carbon emissions. [5] This puts Bangladesh in a tricky situation. Despite being one of the least contributing countries to GHG emissions, Bangladesh bears most of the burden of facing the impacts of climate change. Rising sea levels, floods, and fluctuating weather conditions are no longer an abstract threat for the country. According to a US government report, 90 million Bangladeshis live in high climate exposure areas where two-thirds of the land is less than 15 feet above sea level. [6]

From an economic standpoint, adverse effects could be long-lasting. Already, the country witnessed a loss of USD 3.72 billion dollars from 2000 to 2019 due to climate disasters and volatile weather conditions. The sustainability of Micro, Small, and Medium Enterprises (MSME) would be at risk, disrupting the economic growth engine. Consequently, the GDP of Bangladesh would decline 1.3% in the growth rate until the 2041 fiscal year, with an estimated USD 12 billion dollars in loss. [7]

Stakes of Bangladesh and the Glasgow Climate Pact

As the COP26 ended after much debate, speculation, and barely met expectations, the Glasgow Climate Pact was established. It was divided into five critical sections: mitigation, adaptation, adaptive finance, capacity for loss and damage, and lastly, implementation of a science-based policy approach. [13] In Paris, at COP21, nations have agreed to limit global warming to below 2 degrees Celsius by reducing their carbon emissions with a Net Zero Emission target by 2050. Attending countries set these targets in national plans called Nationally Determined Contributions or NDCs [2]. Yet till COP26, only 89 countries have updated their NDC targets to mitigate carbon emissions.

As a low-middle-income country, set to leave its LDC status, Bangladesh has been advocating for climate-vulnerable countries across the stage. With its Comprehensive Climate Plans and commitments to reducing emissions as a part of its NDC, the country has pledged to reduce carbon emissions by 6.73% by 2020.[8] However, this overachieving aim can fall short if the global north is not holding its end of the pact. Despite the promises made at COP26, the overwhelming consensus is that their aim to achieve Net Zero Emission will ultimately fail. According to the United Nations Environment Programme, the NDC plans for limiting global temperature rise by 2 degrees Celsius have already failed to reach the benchmark to avoid a climate catastrophe. [8]

The most debatable issue that remains unresolved primarily is adjusting to the new constrictions. It is already proving taxing for developed countries to remove fossil fuels and carbons from their economy altogether, then what can be expected of the developing countries with less money to pay for new technology and its infrastructure? [9]

Given the severity of the climate inequity, most developing countries are at immediate threat, without the means to tackle this. At COP15 in 2019, developed countries committed to donating USD 100 billion to the climate-vulnerable countries by 2020, yet according to Organisation for Economic Co-operation and Development (OECD), only USD 78.9 billion has been mobilized.[10]

At COP26, there has been a call for doubling the fund not only for adaptation but also for loss and damage control. While specific measures such as early warning systems for floods and cyclones and food security can be adapted through funds, dislocated lives and loss of land and livelihoods must be reimbursed with separated allocations. In defiance of that, most developed countries rejected the idea creating discourse and dissatisfaction among the CVF countries. [4]

Bangladesh has been steadily growing its economy, even amidst the pandemic. The country has reinforced its efforts to create new industries, job opportunities, and establish a local workforce. However, the imminent threat of climate change can stand to destroy it all. Unfortunately, being one of the lowest carbon emitters, Bangladesh bears the brunt of the climate crisis.

To grow the economy sustainably, the country needs to invest in zero-carbon growth and green technology. There is an urge to implement a viable ‘Climate Prosperity Plan’ instead of empty pledges. By 2030, Bangladesh intends to generate one-third of the country’s energy through renewable sources, create 4.1 million new jobs and grow the GDP by a sustainable 6.8 %. [11]

All of this would require channeling in the climate funding that developed countries have promised. Green Technology is of imminent need across all industries, from agriculture to ready-made garments. Currently, Bangladesh spends USD 2 billion dollars annually on climate adaptive measures, with 75 % of the fund generated from domestic sources. This is not only unsustainable, but it is also insufficient as the country would need almost three times the funds just for adaptive measures to achieve the 2050 climate goals, foregoing the loss and damage. [11]

The Glasgow Climate Pact is consequential to how Bangladesh will transform into a green economy in the coming future. Reducing coal dependency will prove to be cumbersome for developing countries, and hence it is imperative that developed countries hold on to their end of the bargain. However, ‘Green Economy’ is not a rhetorical speech but an answer to climate-vulnerable countries like Bangladesh to secure new opportunities for growth and productivity while standing a chance in the crisis of the twenty-first century. [15]

1. Bangladesh – The Most Climate Vulnerable Country

4. How Deep Is the North-South Divide on Climate Negotiations? – Carnegie Europe

6. How the Climate Crisis Is Impacting Bangladesh.- Climate Reality Project

10. COP 26: How much are poor countries getting to fight climate change? – BBC News

11. How realistic is Bangladesh′s climate prosperity plan? | Asia | An in-depth look at news from across the continent – DW

12. Bangladeshi delegates to COP26 have a tricky job on their hands – The Daily Star

15. Towards a Low-Carbon and Climate-Resilient World: Expectations from COP26 – Centre for Policy Dialogue