Green Bonds in Bangladesh – A New Incentive to Save Our Environment 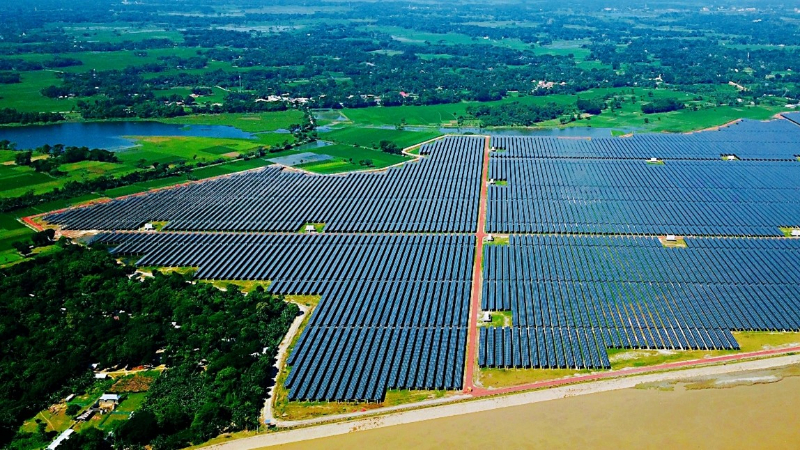 The fourth industrial revolution is imminent, and Bangladesh is eyeing various infrastructure projects to compete globally in attaining Sustainable Development Goals (SDG) and assuring economic wellbeing for all. The country has celebrated its 50th birth anniversary the current year, and during this half a century-long life span it has specialized in textile exporting, outsourcing information and communication technology, shipbuilding industry, and established a stable agribusiness culture. To flourish more in all these sectors and create multiple spill-over effects the country plans a wave of mega projects nationwide namely The Padma Multipurpose Bridge, Cox’s Bazar Airport, Matarbari Coal Fired Power Project, Rooppur Nuclear Power Plant, with more on the rise. However, the Global Infrastructure Output (A G20 initiative) estimates that to finance all its projects, Bangladesh would require  USD 608 billion from the year 2016-2040.

Current trends imply that the market has only accumulated USD 417 billion of investment which defines an investment gap of almost USD 192 billion of long-term financing with no funding source. Hence, developing a vibrant and sizable bond market is of the essence for Bangladesh that will feed the investment gap on a long-term basis catering to the needs of both the investors and the issuers. Establishing a stable bond market can be the potential long-term fund mobilization alternative that will also release pressure from the Banks.

Currently, the Bangladeshi bond market is not strong enough to deal with the long-term investment gap. The bond market is profoundly dominated by government debt securities and capital bonds issued by banks and Non-Banking Financial Institutions (NBFI). The government securities market of Bangladesh comprises tradable and non-tradable securities. Non-tradable securities include National Savings Certificates i.e., Sanchayapatras and Sanchayabonds, for retail investors. The tradable securities have Treasury Bills (T-Bills) of 91, 182, and 364 days maturities and Bangladesh Government Treasury Bonds (BGTB) of 2, 5, 10, 15, and 20 years maturities, and both the T-bills and BGTB’s are issued through auctions [1]. Banks and NBFIs issue capital bonds to meet regulatory requirements and strengthen their capital base. Although, corporates issue ZCB or Coupon Bearing Bond the percentage is meager. Bangladesh falls short of its neighboring countries when it comes to the size of the bond market [2].

At present, the bond market is somewhat lop-sided where a large percentage (around USD 17.2 billion) of outstanding bonds lie with the government bonds instead of corporate bonds (around USD 0.3 billion). However, corporate bonds act as one of the most stable sources of financing with the public sector being 149% in the USA, 60% in China, 60% in Malaysia, 59% in Thailand, and 16% in India on GDP.  People in Bangladesh are skeptical towards corporate bonds mainly due to the past dent left by some of the issuer’s performance in a large number of defaults during the 90s which still questions the corporate bonds’ credibility and the regulations attached to them. The country’s performance in the bond market among developing nations is also subpar.

Lately, an absence of a strong bond market has put a lot of pressure on the banking sector of Bangladesh. An absence of a large corporate bond market has led large corporations to be overdependent on bank financing for various long-term investments. Banks have capacity constraints in terms of long-term financing needs. Sources say that the deposit structures of banks show most of their collections are in short-term deposits (3 months to a year), accounting for roughly 70% of the total deposits, and the rest 25% are in the five years and above range. As a result, there remains a mismatch between short-term liabilities and long-term assets in the bank books [3].

However, Bangladesh is trying to set up a bond market with more longevity and compatibility. The Green Bonds will be an essential tool in this trial. Green Bonds are used for financing environment-friendly projects to reduce carbon emissions and minimize all sorts of industrial pollutants. Due to this unique feature, green bonds may elevate the currently stagnant Bangladeshi bond market scene.

The prospect of green bonds in Bangladesh

Green bonds are almost exactly like regular bonds except the money raised from the investors is used to finance projects that positively impact the environment for example- renewable energy, green buildings, green garments, etc [5]. Developed nations have already started equipping with several international green bond strategies to incentivize global investors to reduce pollution. Bangladesh will soon graduate from the Least Developed Country status (LDC), and similarly, the country has to lay out some plans on how to entertain green bonds in the current bond market scene. On April 7, 2021, Bangladesh Securities and Exchange Commission permitted Sajida Foundation- a non-governmental organization to raise BDT 1 billion from the capital market by issuing green bonds for the first time in the nation’s history [4]. The NGO plans to use the funds raised through the Green Zero-Coupon Bond to increase the outreach of its microfinance program and ensure environmental development. Public financial institutions, mutual funds, insurance companies, listed banks, cooperative banks, regional rural banks, organizations, trusts, and autonomous corporations can buy these bonds [4].

Preparing for a more energy-efficient nation

International Finance Corporation (IFC) estimates a total climate-smart investment potential in Bangladesh to be adjacent to USD 172 billion between 2018-2030.  This estimation is based on Bangladesh’s Nationally Determined Contribution (NDC) targets prioritizing energy, transport, and industrial sectors. This ambitious and progressive NDC aims to reduce greenhouse gas emissions by 5% by 2030, or 15% conditional on mobilizing international finance and support from international sources. Apart from that, conditional measures in sectors like buildings, agriculture, waste, land use, and forestry sectors are also included in the priority list. IFC also estimated the demand for USD 26.5 billion between 2011-2030 for Bangladesh to meet its conditional targets. And the previously stated estimation of around USD 172 billion potential investment between 2018-2030 maps as follows

Most of the allocated fund is expected to be channeled from coal power to greener energy sources. In 2019, out of 19GW of national electricity capacity, only 3% was from renewable energy sources. The GoB (Government of Bangladesh) aims to increase capacity up to 24GW with a 10% share for renewables by the end of 2021. They also estimate this capacity to grow to 40GW by the year 2040. Investment in electricity is mostly public-funded and the private sector accommodates a minor share. Issuing green bonds to increase investment in reshaping domestic electricity production can be a step forward.

Energy efficiency will be critical in achieving Bangladesh’s NDC commitments. NDC sets an unconditional target for reducing emissions by 5% in the power sector and the plan to go about it is by investing in green buildings. For industries NDC targets to reduce emissions by 4%. The cumulative target by the GoB is to achieve a 15% reduction in primary energy consumption per unit of GDP in 2021 and 30% by 2030. Currently, the industry segment represents the largest energy user accounting for nearly 50% of primary energy consumption followed by the residential sector at 30%. Energy efficiency and conservation can reduce up to 15% of the energy required by industries. The scope here to invest is by creating green buildings and green garments. As of yet, Bangladesh already has 150 green garments located inside. In addition, 9 of the top 10 green garment factories in the world are located here. Moreover, another 500 more are on the rise. If investors and issuers are made more aware of these landmarks there will be an investment inflow into green bonds. As a result, the proposed energy efficiency target by NDC will be met.

The emission reduction target by the NDC in transport is around 9% [6]. Busses and trucks are primarily accountable for the high emission rate. To reduce emissions from transport, environment-friendly railway systems, battery-powered vehicles, and more projects like the Mass Rapid Transit System in Dhaka should be materialized. Investment in the transport sector is mostly publicly funded with some mammoth projects financed by international organizations. However, the government can raise money to fund these projects domestically by issuing green bonds.

While sharing his insights about climate bonds, the Director of the International Centre for Climate for Change and Development (ICCCAD) explained how we can also use reputed heritage sites of Bangladesh and try to build eco-tourism and non-polluting industries around these areas by investing through climate bonds. For example, Cox’s Bazar is undergoing a significant change subject to the new airport. Many new hotels and tourism parks are under construction which is mostly public-financed. However, these megaprojects could take place more often by issuing green bonds, enabling domestic and global investors to invest [7].

Greener bonds in the west

The insights gained so far accords that Bangladesh has yet a lot to improve if the country attempts to compete in the global green bond market. However, Bangladesh has as much potential as any other country with its abundant natural resources which need care. The nation can adopt international strategies to reach its total capacity in the bond market.

We can look at Indonesia, where to promote green bonds and halal industries and commercial activities, they launched a Green Sukuk Bond that raised funds of more than a billion USD [7]. But to materialize this product, they had to eliminate a negative list of industries that stood as a conflict of interest i.e. polluting industries, guns, alcohol, etc. On the other hand, they enlisted eco-friendly industries in their positive list providing them loans on competitive terms. India is also promoting their bond market to gain the attention of global investors which is having an impact on its economy. They have been the second-largest issuer of green bonds globally after China with the second-largest volume of outstanding green bonds (USD 10.8 billion). China, Indonesia, Malaysia, the Philippines, and Thailand make up most of Asia’s bond market [8].

The United States of America is the largest source of green bonds [5]. From veteran financial institutions to tech giants all have poured in on this new product of the bonds market. Even state and local governments are financing various projects through investing in the green bond market.

Europe is also ahead of the game as the European Union issued about USD 14 billion worth of bonds which is the largest deal ever. The money raised will support projects including a research platform for the energy transition in Belgium and wind power plants in Lithuania. Europe plans to issue around USD 300 billion worth of bonds in the next five years to finance sustainable investments. Countries like France, Germany, and the Netherlands have issued green bonds. A Swedish property company, Vasakronan, issued the world’s first green corporate bond back in 2013.

Green bonds are conducive to creating a sustainable environment for living while generating a ton of profit. Bangladesh still has to make many regulatory changes with confluence to the global market in order to flourish in the green bond market. But it is for sure that the country has an enormous potential to earn and finance a lot of its megaprojects by creating more scopes to invest in green bonds. That will assist in the nation’s transition to a developed country in a shorter duration.

2. Bond market of Bangladesh: Yet to be vibrant but promising – The Business Standard

3. Development of the Bond Market – A Pressing Need for this Growing Economy – IDLC Finance

4. BSEC approves green bond for the first time in Bangladesh – The Financial Express

5. Explainer: What is the green bond market and why is it growing so fast? – World Economic Forum

7. How do we tap into the global investment market? – International Centre for Climate change and Development (ICCCAD)