LNG Price Volatility and its Impact on Bangladesh 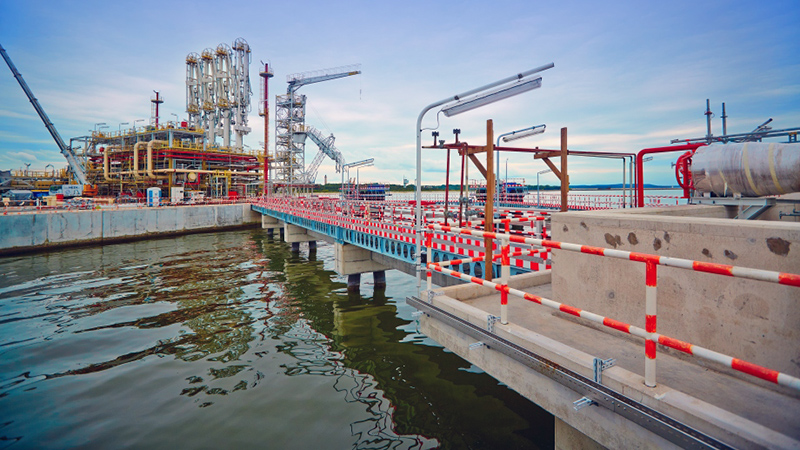 Against the backdrop of a receding pandemic, the global economy is finally on the verge of waking up. After almost two years of intermittent partial and full lockdowns, workplaces and educational institutes seem to be well on their way to opening up for good. The uptick in economic activity, in addition to more extreme weather conditions, i.e., colder weather and hotter summers, has led to a global surge in demand for energy. For example, global electricity demand increased by 6% [1] in 2021, after having contracted by 1% in 2020.[2] Due to the pandemic and the decreased demand for energy, investment in oil and gas was lower in 2021, compared to the previous year. As a result in 2021, the supply of coal and natural gas struggled to match the pace of demand growth, putting upward pressure on electricity prices. [21]

The supply of natural gas, one of the low carbon-emitting fossil fuels, has been especially inadequate in meeting the rising global demand for energy. Prices of natural gas started to climb after October 2021, due to a combination of an uptick in economic activity, volatile weather conditions, and production and export disruptions. Natural gas is a critical part of the economy for developing countries such as Bangladesh, where it powers almost 52% of the generation capacity. [23] The situation was exacerbated even more as one of the key producers of natural gas, Russia, invaded Ukraine in February 2022 [21], resulting in a military conflict. The price of natural gas, therefore, reached an all-time high in mid-March 2022. The high prices of gas may have further repercussions on Bangladesh’s economy, given that inflation is already at a 16-month high. [24] To understand the precarity of the economic situation, it may be useful to examine the details of the global energy crisis first.

To fully understand the current global energy crisis, we need to dial back to the beginning of 2020, when the COVID-19 pandemic hit the world. The first few months of the COVID-19 pandemic led many economies to shut down completely or partially. Energy demand dropped slightly as businesses closed and people stayed home. Across the world, travel was heavily restricted, and educational institutes closed down or restored to remote learning. During the early stages of the pandemic in 2020, which were the second and third quarters of 2020, LNG imports and exports decreased slightly in response to a fall in demand. [17]

However, in 2021, as the vaccination program caught steam, restrictions were lifted in industrial nations, leading to a sudden surge in demand for energy.  The sudden spike in energy demand, colder-than-average temperatures in the first quarter of 2021, and unexpected LNG supply chain outages pushed up LNG prices in multiple developed and developing nations. South Asian nations, including Bangladesh, reduced LNG imports and switched fuels in response to the high LNG prices. [2]

The rise in gas prices has inhibited ambitions to mitigate climate change.  In October 2021, as the 197 countries worldwide gathered to attend the 26th annual climate change conference, COP26, all of them agreed to phase down on coal and fossil fuels. This agreement led them to turn to natural gas as the transitory fossil fuel as it emits comparatively lesser carbon and creates less pollution. [5] However, many nations have fallen short of their ambitions, given the unfavorable gas prices. More than 50% of the additional demand for electricity globally in 2021 was met through coal-fired generation.

Preceding the macroeconomic factors, the other significant variable that remains to impact the natural gas market is geopolitics. Russia is the second-largest gas-producing producer globally, producing about 22.73 trillion cubic feet of natural gas per year. [13] However, on February 24, 2022, as Russia invaded Ukraine, the future supply of natural gas came to lack certainty. Most of the developed countries unanimously have imposed embargoes on trade with Russia, leading to restrictions on the import of energy products, such as natural gas. The resulting supply shock caused significant disruption to gas prices worldwide due to sudden changes in demand, aggravating macroeconomic elements. [3]

The recent update in Russia’s geopolitical scenario left countries worldwide scrambling to investigate other sources. The most affected region over this is Europe, as over 40% of Europe’s gas is supplied by Russia through multiple pipelines that travel across the eastern European front, including Ukraine.[14] Among all European countries, Germany is heavily dependent on Russia for its gas supplies. Nordstrom 2, the latest gas pipeline that passes through the Baltic Sea has been halted in its administration, putting the future of gas in Germany in uncertainty. [27] Research estimates that up to 33.5 billion cubic meters of natural gas exports will be at risk for the rest of the year, accounting for almost 30% of Russian natural gas flows into Europe. [15] The situation is further complicated as the west imposes multiple sanctions on Russia. Sanctions have been imposed against foreign payments, foreign debts, the technology and aviation industry, and the Russian central bank.[6]

Natural Gas is critical to Bangladesh’s economy — in FY 2020-21, 60% of Bangladesh’s Net Generation of 80,423 MkWh was powered by Gas [23]. In the same year, Bangladesh consumed 1017 Bcf of gas, and almost 40% of gas was utilized in the power sector. [18] According to Petrobangla official estimates, Bangladesh has a total of 29.9 trillion cubic feet of domestic gas reserves across 27 commercial gas fields. [26] However, since 2016, the country has seen a steady decline in domestic production. Hence, the import of Liquefied Natural Gas (LNG) has been initiated to address the problem of decreased production. For example,  102.86 Bcf LNG has been added to the national grid by Excelerate Energy, while SUMMIT LNG Terminal Co. (Pvt) Ltd. has added a further 100.02 Bcf since April 2019. With gas reserves declining rapidly, Bangladesh’s economy may become more vulnerable to the volatility of LNG prices. For example, In October 2021, Bangladesh bought LNG at record prices of 36.95 USD per mmBtu from Gunvor, even though in March of the same year, the price of LNG was only 7 USD per mmBtu. At the end of last year, the price of LNG soared to near 50 USD per mmBtu internationally, causing Bangladesh to halt its LNG imports. [11]

The crisis between Russia and Ukraine has exacerbated our dependence on LNG imports. As Russia is the third-largest crude oil producer, prices of LNG imports have reached a record high. [16] Due to inflated prices, the current spot price of LNG is 4 times that of 36.95 USD per mmBtu (price in October 2021). Under the umbrella of Petrobangla, the state-run Rupantarita Prakritik Gas Company Ltd has already been unable to fulfill the purchase quota for twenty consignments of LNG. So far, it has only bought eleven of those consignments. [19] As a result, domestic energy demands are being met by shifting to options with a higher carbon footprint. [25]

To match the global energy prices, the Government of Bangladesh has increased fuel and gas prices across the board creating disapproval among consumers and producers. The government has also started rationing gas to CNG stations and factories to facilitate equitable distribution across different sectors. CNG stations have been ordered to remain closed six hours a day, from 5 pm to 11 pm amidst the crisis. Moreover, the Textile and Ready-Made Garment industries are cut off from gas supplies from 5 pm to 9 pm. According to Bangladesh Knitwear Manufacturers and Exporters Association (BKMEA) and Bangladesh Textile Mills Association (BTMA), this rationing would result in delayed production and a decline in exports of RMG and Textiles.[29]

As it becomes harder to subsidize gas prices, the impact falls into the hands of consumers. For the past six months, there has been a steady rise in the inflation rate as prices of goods and services increased across all sectors. Essential commodities are becoming more expensive, and as a result, the cost of living has increased.

The far-reaching implications on energy and LNG prices have already descended upon Bangladesh as it tries to run its economy on the path to recovery.  Volatility in energy prices has increased the cost of trading. The EU, which is likely to be highly economically impacted by the Russia-Ukraine crisis, also happens to be one of Bangladesh’s key RMG export destinations. The combination of high trading costs with potentially falling demand for RMG puts Bangladesh at risk of low export revenue and rising unemployment. [20]

Over the past weeks, there has been a significant increase in the prices of essential commodities in Bangladesh. Uncontrolled prices across the economy may impact the purchasing power of middle- and low-income people, perpetuating inequality further after the two-year-long pandemic.

The hike in energy prices affects not only the economy of the country but also its energy security. This could also complicate geopolitical relationships as, ultimately, Bangladesh could be forced to choose sides or be dependent on external forces.