The Impact of Climate Change on Bangladesh (Part I: Land) 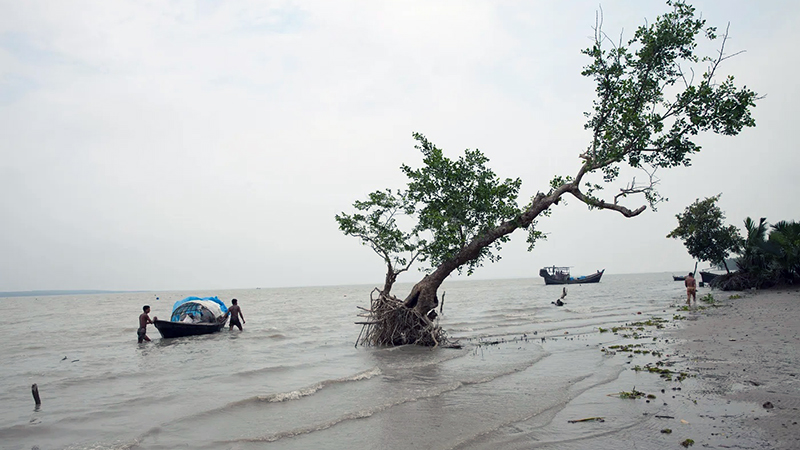 A Global Crisis in the Making

The Earth has had an eventful 4.5-billion-year history with climate change occurring nonstop. However, now the climate is not just changing, but effectively worsening. Global warming is directly associated with human activity and tackling it is becoming an ever-increasing necessity. Records show that there has been an exponential growth in heat levels like never before and according to NASA, 17 of the 18 warmest years on record have all taken place since 2001. While one end of the world faces extreme heat, another faces disastrous storms and even snowfall in deserts. The concern is simple, can there be a sustainable future if we keep going on this trajectory?

The recent AR6 report, by the Intergovernmental Panel on Climate Change (IPCC) released in February 2022, confirmed that the world will face a major planetary emergency‒if not a full-blown catastrophe‒if the Paris Agreement goal of limiting global warming to 1.5°c above pre-industrial levels this century is not reached. Experts say we only have this decade to make lasting changes and have a liveable future. The most unfortunate part is that the poorest and most vulnerable countries are the ones that will face the most devastating impacts of climate change. [1]

According to the Global Climate Risk index of 2021, five of the top ten nations most affected by long-term climate-induced risks were Asian countries. Bangladesh ranked seventh in both the 2020 and 2021 reports. [2]

Bangladesh is one of the countries most vulnerable to climate change because of its geographical location. It lies on the Tropic of Cancer which gives it the characteristic tropical climate‒consisting of hot temperatures throughout the year‒that many countries across the latitude share. The typical climatic condition in Bangladesh involves high temperatures and frequent floods, tropical cyclones, tornadoes, and tidal bores. Although the northern regions have altitudes as high as 105 meters above sea level, most elevations are less than 10 meters above sea level‒especially in the coastal south. This means Bangladesh is very vulnerable to rising sea levels due to global warming as low-lying lands will get submerged first. About 10,000 square kilometers of the total area of Bangladesh is covered with water which makes it very prone to the effects of deforestation, soil degradation, and erosion.

This article is part one of a three-part series that divides the impacts of climate change on land, air, and water in Bangladesh. It details all the problems climate change imposes on the country’s natural resources, industries, and people.

Up to 25000+ square kilometers of Bangladesh to Be Submerged

UN High Commissioner for Human Rights and the Environmental Justice foundation state that around 16330.6 to 25238.2 square kilometers of Bangladesh‒especially around the low-lying coastal regions‒will be submerged due to rising sea levels by 2050. This would mean the 15-20 million people living in these areas would lose their homes, lands, and area-specific livelihoods. Environmentalists and geologists emphasize that if the seas level rises even by 1 meter, 70% of Sundarbans will be submerged.

It is estimated that each year, Bangladesh loses about 32 square kilometers of habitable land due to erosion in rivers and regains 52 square kilometers of inhabitable land due to sediment deposition. [3] The newly formed land requires afforestation and long-term development. Hence, this is not a substitution for the lost landmass due to climate change. While the land loss is directly caused by sea-level rise, other indirect problems also occur such as salinization which has equally devastating impacts.

According to the country’s Soil Resources Development Institute (SRDI) salinity has increased by around 26 percent in the country in the last 35 years, spreading into non-coastal areas as well. Bagerhat, Barguna, Barisal, Bhola, Khulna, Jhalakati, Pirojpur, and Satkhira districts will be affected most adversely. [4]

Bangladesh is a country with a widespread coastline that is 580 km long and has a very low-lying topography. Storm surges, floods, and other natural disasters pave a path for the saline water to saturate the coastal lands and surrounding water bodies. By 2050 salinity will cause shortages of drinking and irrigation water as well as major changes in the aquatic ecosystems in the Southwest areas of Bangladesh‒especially during the dry season. The maintenance and repair costs of paved roads will also rise by up to 252% and the yield of high-yield variety rice may fall by 15.6% due to saltwater imposition. [5] Bangladesh Bureau of Statistics found that 19683000 of 60828000 (32.4%) of the labor force was employed in the agriculture, fisheries, and forestry sector in 2017.  Climate change therefore directly impacts the industries and GDP of Bangladesh.

Irrespective of the sector, the fact remains that those from the most vulnerable groups in the country are also the ones whose occupations greatly rely on the climate. These people lose their jobs, homes‒sometimes both‒and become climate migrants. They are forced to choose between upskilling and reskilling because the same skills are insufficient and improbable due to locational variability.

23.8 million People in Bangladesh Will Be Displaced

In Bangladesh, one in every seven people will be displaced due to climate change by the end of 2050, according to a recent estimation. [10] Chittagong and Khulna districts are likely to witness the highest within-district migration which is estimated to be between 15,000 and 30,000 migrants per year. [4] There is huge intersectionality between those who face climate change impacts and vulnerable groups‒especially women and girls. According to a climate change profile of Bangladesh by the Ministry of Foreign affairs, a high intake of saline water could be interconnected to diagnoses of eclampsia, hypertension, and pre-eclampsia in pregnant women. Levels of food insecurity in Bangladesh are already high, with 56% of households reporting periods of food shortages each year, and this will, in turn, exacerbate the other impact of climate change‒outbreaks of infectious or vector diseases. [11]

While climate change is a global problem, Bangladesh faces the brunt of it, so now is the time to make better choices and put things into perspective. 4.4 million households in the coastal areas will be struggling to stay afloat in just a few years. Those who survive will migrate to the already densely packed cities. It is not just a scenario anymore but a conclusion. Bangladesh is currently focusing more on adaptation tactics rather than mitigation methods. However, it is challenging to separate individual problems because many of the climate change impacts converge. For example, the salinity intrusion issue impacts both the land and the water bodies of Bangladesh.

In the second part of this series, we will focus on the effect of climate change on water in Bangladesh and go into more detail about the impacts of storms, cyclones, and floods.