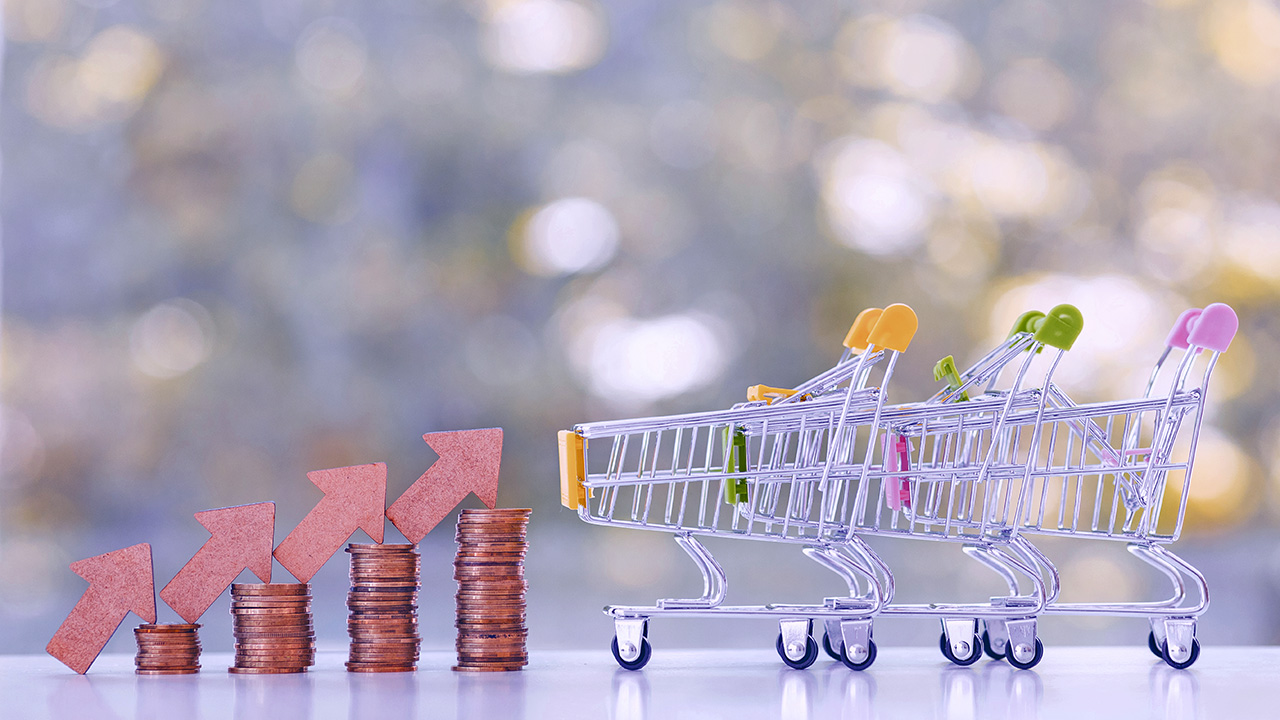 The Coronavirus Pandemic has taken a hefty toll on the world’s economies. Prolonged lockdowns, uncertainty about the future, and loss of lives, accumulated as ingredients for a depressed economic outlook. Consequently, this resulted in a sharp fall in global consumer spending of USD 3.3 trillion [8], a distressed supply chain [3], rising global food prices, and expansionary policies by almost all governments worldwide to rejuvenate their contracted economies.

As countries started recovering from the pandemic, economic uncertainties began to fade. But, the factors caused due to the pandemic aided the rejuvenating economies to inherit high rates of consumer savings, expansionary policies to tackle economic slowdowns, and an eventual higher level of consumer spending respectively. All of which contributed to the formation of the high levels of inflation that are presently experienced worldwide. [9]

This article investigates the major factors causing global inflation, its trickle-down effect on the domestic inflation in Bangladesh, and the concerns it imposes on its emerging economy.

The advent of the pandemic gave rise to fear and ambiguity regarding the future, prompting consumers to reduce their consumption drastically. [2]

A sample data comparison done between India, Singapore, Korea, Hongkong, China, the European Union, and the United States shows the disparity in final consumption expenditure. [10][13] It is observed how the final expenditure fell drastically at the onset of the pandemic, from 2019 to 2020. Subsequently, the consumers were disinclined to spend in the face of uncertainties, which acted as a key factor for economic contraction during the pandemic.

To tackle this economic contraction, governments worldwide stepped up to ensure an increase in consumption expenditure through expansionary fiscal and monetary policies. According to the IMF’s Fiscal Monitor of April 2020, the estimated global fiscal support stood at about USD 9 trillion. With direct budget support of USD 4.4 trillion globally, additional public-sector loans and equity injections, guarantees, and other quasi-fiscal operations (per se, the non-commercial activity of public corporations) amount to another USD 4.6 trillion. [11]

Reduced consumption accompanied by expansionary fiscal and monetary policies gave higher gross savings. In the graph below, a gross savings comparison between the countries mentioned above delineates an observation of how all of them had positive gross savings when the current period (2020) is compared to the previous one (2019). [12]

Patronized by expansionary government policies, the increase in the gross savings of the consumers resulted in pent-up demand for goods and services that would lead to the persisting high levels of inflation.

Adding fuel to the fire, a significant predicament taking inception out of the pandemic was the supply chain crisis, particularly pertaining to the slowdown in global shipping and increasing freight costs.

The global supply chain infrastructure consists of a network of factories, distribution centers, merchants, processing centers, and shipping centers worldwide, interdependent. At the onset of covid, the entire infrastructure crumbled; the entire system went through slowdowns in its operations due to lockdowns and other government restrictions. Moreover, the latter spawned variants of covid-19, further prolonged recovery from the sustained supply-chain shocks [19]. Amidst this crisis, the pent-up consumer demand worldwide only added to the bottleneck of the entire supply chain; shipping companies, in particular, had faced the brunt of the bottlenecks caused due to crisis. Freight costs had risen from USD 1,431 in December 2019 to USD 11,109 in September 2021 [18]. Moreover, according to a report by UNCTAD projects, this rise in maritime transportation costs is expected to soar consumer price levels by 1.5 percent [19], directly contributing to further inflation.

Another major contributing factor prolonging and exacerbating this inflation is the ensuing post-pandemic food crisis. Globally, countries face a price hike in food commodities and even food shortages in some places. In accordance with the Food and Agriculture Organization’s food price index, the prices of food commodities have increased from 93.32 points in January 2019 to 135.6 points in April 2022.

The combination of geopolitical issues like the Russia-Ukraine war, post-covid economic downturns, and natural calamities are responsible for creating this crisis. While the pandemic had slowed down the supply chain and delayed capital goods necessary for agriculture, geopolitical turmoil compelled agricultural export heavyweight countries like Russia and Ukraine to take protectionist measures and restrict trade, further exacerbating the food crisis [22]. On top of all of these, the natural calamities and extreme weather conditions, such as heatwaves in South Asia, further clamped down on agricultural production, restricting countries from supplying more agricultural produces and adding further woes to the inflation [23].

Owing to the globalized nature of economies, the inflation of one country significantly affects the inflation of another. From the aforementioned final expenditure spending and gross savings sample data comparison done between India, China, Singapore, Korea, Hongkong, European Union, and the United States, the inevitability of high inflation rates was observable. All the countries mentioned above are some of its biggest trading partners in Bangladesh. Consequently, any changes in the prices of commodities in those countries would consequently result in changes in the prices of goods in Bangladesh; as such, any price hikes in those countries would trickle down to an increase in the price levels in Bangladesh. This trait is observable as a foundation for the rising inflation rates in Bangladesh.

The Inflation in Bangladesh

Corresponding to the global status-quo on inflation, the price levels of goods and commodities have soared in Bangladesh [6]. The rising price levels in Bangladesh are mainly attributed to the high food and energy costs, high production costs, and a spike in the pent-up consumer demand, resulting in a rise in consumer spending.

This inflation rate is a part of the increasing price levels that have occurred since the economy started to recover and is only expected to worsen in the coming months. Inflation in Bangladesh has predominantly encompassed the dimensions of food, energy, the overall costs of production and consumer spending. These factors have been analyzed below:

Food commodities being one of the essential commodities with highly inelastic demand compared to other commodities serves as a good representative of colloquially identifying the overall level of inflation in a country.

In the diagram, it can be observed that ever since the beginning of 2021, the level of food inflation has only tended to increase. A further scrutinization of the food prices of the pre-pandemic period and the post-pandemic recovery period shows us the disparity in the price differences.

The price comparison report shows that once packed Soya-bean oil of BDT 108-110 now costs around BDT 160-168. Similarly, an increase in the prices of rice lentils, sugar, packed soya oil, and atta is also observable, attesting to the fact that food inflation is on the rise.

A significant factor contributing to the overall trend of high inflation is the high energy price hikes, which is the high rate of inflation that persists in the energy sector. If the price hikes in the energy sector are very high, it reverberates the costs of finished products to be more expensive owing to higher production costs; the overall inflation would also yield higher, resultantly.

From the diagram, the rise in fuel prices worldwide can be observed. As the monthly fuel price index increases, the observable changes in the price of fuel commodities in Bangladesh can also be simultaneously depicted. For instance, car LPG prices have soared from BDT 50.56/ liter to BDT 58.68/liter in October 2021 [24]. Similarly, diesel prices have also hiked from a price of BDT 65 to BDT 80/ liter in November 2021 [25]. Consistent with the fuel price hikes, the Bangladesh Energy Regulation Commission is already in talks to increase electricity prices by 58 percent from the current price, transitioning the price of 1Killowatt hour (kWh) from BDT 5.17 to BDT 8.16 [26]. A key reason behind this price hike is the rising energy prices internationally due to higher demand for increased production and lower supplies due to geopolitical turmoil. [17]

A consequence of fuel price hikes and higher rates of food inflation is the provocation of workers working within the supply chains to demand more wages in order to address the higher cost of living; in doing so, transportation costs and operational costs increase significantly. Consequently, this results in higher prices for the producers to produce. Ultimately, higher production price translates into the higher overall prices of the goods, spiraling into even higher rates of inflation.

Against the backdrop of the economic recovery from the pandemic, the consumption that was held back due to lockdowns, and the accrual of excess capital in the hands of employed people, a pent-up demand took shape, resulting in an overall increased consumer spending.

The diagram above depicting the gross savings of Bangladesh frames contextualization to the hypothesis of pent-up demand that eventually leads to rising consumer spending.

The combination of food price hikes, energy price hikes, and higher costs of production, accrued with the spike in consumer spending due to pent-up demand, predominantly caused the high rates of inflation that persists in Bangladesh today.

From the perspective of domestic inflation, despite showing traits of demand-pull factors of a recovering economy, the lives of ordinary citizens have been made much more expensive. The rise in commodity prices increases disproportionately in comparison to income and wages.

From the graph, it is observable that in FY2019-21, the gap between price and wage rate was 102.87 points. This gap had further widened to 114.23 points by March of 2022. Therefore, it can be clearly stated that the general people’s lives have become more expensive, and this trend is only expected to rise in the coming days.

Lack of a proportional rise in wages compared to prices incurs severe socio-economic opportunity costs on the general population. People become more susceptible to poverty, and people already inflicted with poverty find it much harder to come out of it. Being susceptible to poverty only hinders people from emancipation by curbing their opportunities for education, financial security, and an overall better standard of living. [1] Moreover, inflation hurts the poor the hardest, furthering inequality; according to research done by Muhibullah & Das (2019), a 1 percent increase in inflation results in a 4.99 percent increase in inequality, exacerbating and marginalizing the poor even further.

From the perspective of global inflation, rising import costs would necessitate even higher costs for the home country, eventually trickling down to higher production costs, thus resulting in higher domestic price levels, that is even higher inflation.

Currently, Bangladesh is facing a soaring trade deficit amounting to USD 18.7 Billion in the first seven months of FY 2021-22. In comparison, in FY 2019-20, the trade deficit on Year on Year standing was USD 17.85 Billion [7]. This increase in trade deficit is alarming for a stable economic outlook for any country, but even more so for a developing country like Bangladesh. A higher trade deficit would mean lower foreign reserves, making the country prone to macro-economic instabilities. The government has attempted to mend this deficit by enhancing exports and remittances through currency devaluation [4]. Still, between July and February of FY2021-22, import payments shot to USD 52.60 billion, where 72.38 percent was spent on essential commodities [5], indicating an uncontrollable inflation rate with evermore exhibition of cost-push traits.

The recovery of Bangladesh’s economy in line with the rest of the world is a sign of relief. But the distinction is to be made on whether the higher inflation rates are merely just the signs of a recovering economy or if they are here to stay for a prolonged period. It is necessary to identify whether demand-pull factors still drive the inflation due to the economic rejuvenation, or whether the cost-push factor of soaring prices due to economic slowdowns and geopolitical turmoils is dictating the terms. Nonetheless, being unable to control the level of inflation would spiral the economy into unforeseeable predicaments, reversing all economic gains made throughout the years.