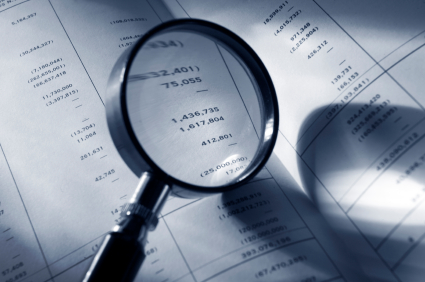 The word “forensic” might cause you to think about the process of working a crime scene owing to all the CSI and other detective drama. These investigators track down criminals using DNA samples, fingerprints, bloodstains, photos and other clues. So at first, you may wonder how the word “forensic” could ever be joined with the word “accounting.”
Forensic just means “relating to the application of scientific knowledge to a legal problem” or “usable in a court of law.” Most of the crimes, such as homicides, investigated on a show like “CSI” are known as “crimes against the person.” Forensic accounting is simply a specialty field within the broader arena of accounting.

The types of crimes forensic accountants investigate are classified as “crimes against property.” They investigate crimes such as fraud and give expert testimony in court trials. They also perform work related to civil disputes. Forensic accountants are also known as fraud investigators, investigative accountants, forensic auditors or fraud auditors.
Although forensic accounting may not sound as glamorous as its other investigative counterparts, the field has received more attention in recent years. This is due in part to the high-profile, financial white-collar crimes involving large corporations, such as the Enron an­d Adelphia Communications scandals of 2001 and 2002. The federal government employed impartial forensic accountants to uncover the extent of the fraud and other accounting irregularities practiced by executives and the accounting firms associated with them. Let’s examine exactly what type of work forensic accountants actually do.
Forensic accountants are more than just number crunchers who happen to work on criminal or civil disputes — these accountants possess additional skills. They must conduct investigations, know how to use a variety of computer programs and communicate well. Some forensic accountants specialize in specific industries that are susceptible to fraud, such as insurance or banking, and learn the business practices associated with those fields.
Because the reputations of individuals and companies are at stake, forensic accountants must be very discreet when conducting their investigations. They must be independent and impartial, taking into account both the financial records and the conduct of employees. Unlike other accountants, when forensic accountants conduct audits, they are actively looking for signs of fraud. In addition to examining financial statements to determine whether they are accurate and complete, they may seek out internal databases and court records. Because people committing fraud have hidden the evidence of their crimes, forensic accountants must look beyond the numbers and anticipate criminal actions.
In addition to investigating, forensic accountants may provide litigation support. Attorneys engage the services of forensic accountants to review existing documentation and testimony and explain their financial significance. A forensic accountant can tell the attorney what additional information may be needed to prove the case and what questions to ask of witnesses. The forensic accountant may also review damage reports and state whether the report was put together accurately and supports the case.
Enron and other companies brought some aspects of forensic accounting to prominence in recent years. In 1997, Sunbeam, a company that manufactures small appliances, followed a practice called bill and hold. This is when a company records sales of its products as profits for the current quarter, while waiting to deliver the product (typically they wouldn’t be recorded as sales until they were actually shipped). Sunbeam sold huge amounts of its products to other companies at a discount, but kept the items in warehouses. On paper, the company appeared to have had high sales; however, Sunbeam’s warehouses were full of unsold product. This practice was uncovered by a financial analyst at investment firm Paine Webber, who downgraded the value of Sunbeam’s stock.
Bill and hold isn’t illegal, but Sunbeam’s shareholders felt deceived and filed lawsuits. Sunbeam’s accounting firm, Arthur Andersen (later ruined by its involvement with Enron), performed an audit and reported that Sunbeam’s books were accurate and in accordance with federal guidelines. However, the board was unsatisfied and hired Deloitte & Touche to review Arthur Andersen’s audit. This follow-up uncovered proof that the numbers had been manipulated. The Securities and Exchange Commission investigated Sunbeam, and its CEO, Alfred Dunlap, was fired and forced to pay millions of dollars to settle investment lawsuits. He paid $500,000 in fines and was banned from serving as an officer in a public company.
The practice of forensic accounting in Bangladesh is very low compared to the developed nations like USA, Canada or Australia. However, in order to combat the fraud and corruptions inflicting this country’s economy, we need effective tools to measure, detect and prevent the aforesaid nuisances. To effectively implement Forensic Accounting, it can be recommended that references or syllabus of university courses could include this particular field. The more we learn and implement this in our system the greater will be the transparency thus establishing good corporate governance.
Source:
http://www.asaub.edu.bd/data/asaubreview/v5n2sl6.pdf
http://en.wikipedia.org/wiki/Forensic_accounting
http://www.howstuffworks.com/

Tasnova works at Acnabin Chartered Accountants and is an ACCA third part candidate.