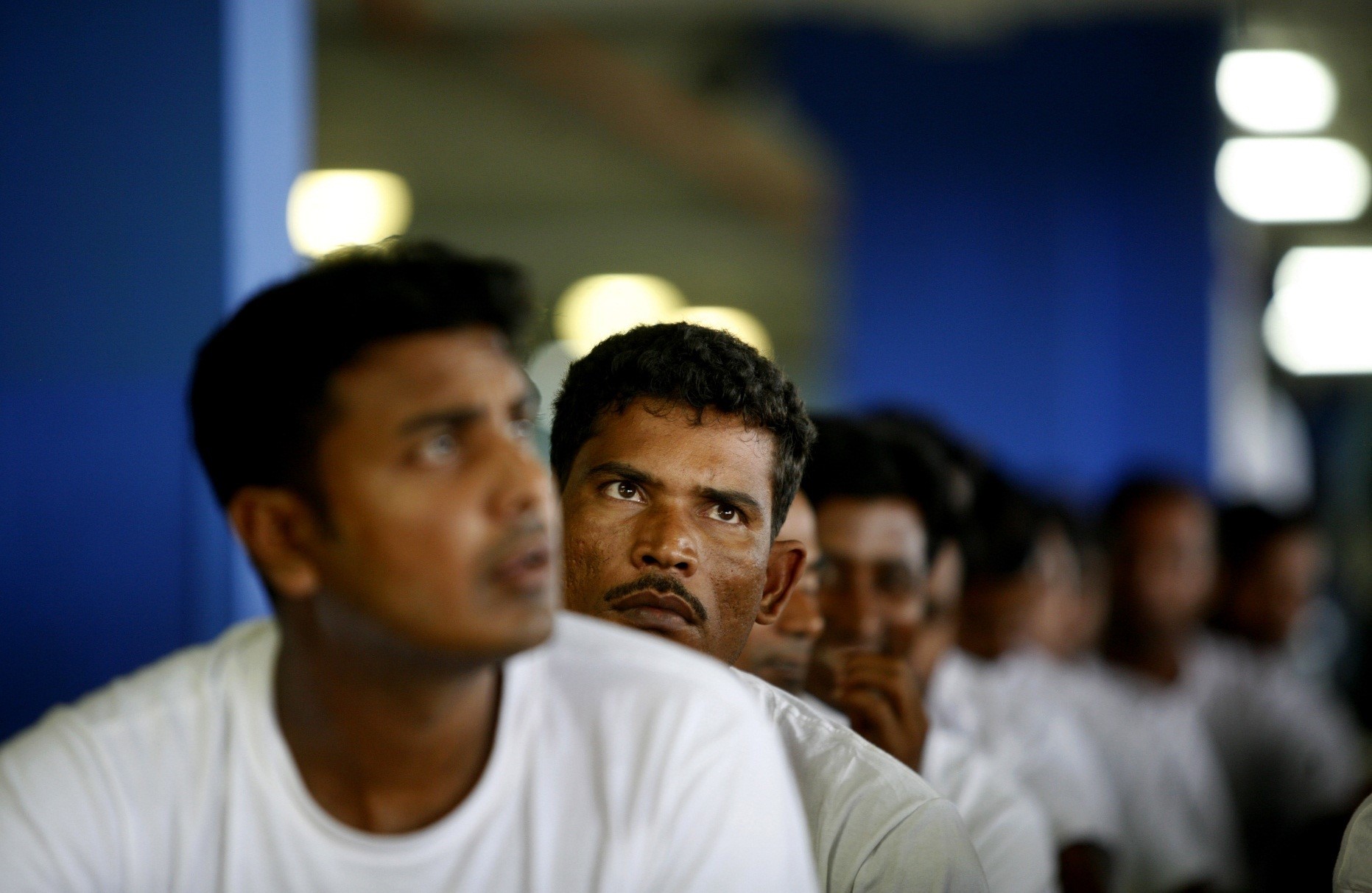 Global remittance flow has declined for two consecutive years- for the first time since the turn of the millennium. The last time there was a decline- it was during the global financial crisis. The World Bank expects world remittance to rise to a record high of 600 billion dollars in 2018, suggesting that the current downturn is just a blip. But what actually caused it? 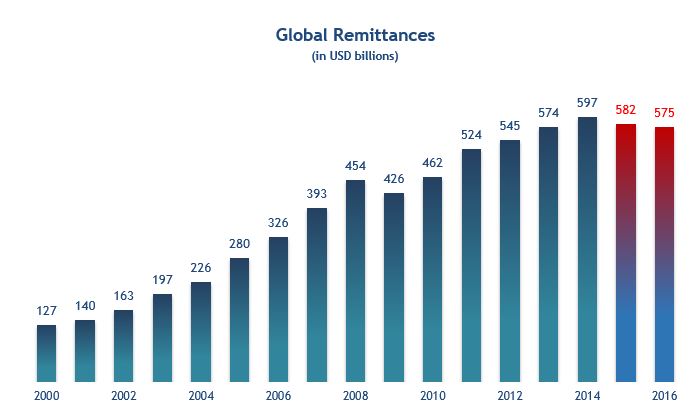 Economists and market analysts provide explanations from different viewpoints to why the slump is happening.

EXCHANGE RATE: Bankers say that a major reason is the adverse exchange rates, that it discourages workers sending money through official or legal networks. These transactions do not appear on records.

STRICTER MIGRATION POLICIES: Policy makers and government officials from Asian and African countries blame stricter migration laws of US and EU member countries. Remittances from USA fell at a crashing rate. With the Trump administration’s strict migration laws, even residents with green cards fear that if they leave the country- they might not be allowed back in. Rational or not, these fears drive them to save more and send less.

Nevertheless, while explaining the downturn of remittance flows to emerging Asian economies, it all boils down to two words. OIL PRICES.

Consistent low oil prices and weak economic growth in the Gulf Cooperation Council (GCC) countries and the Russian Federation- the sources of almost 20% of global remittances- are taking a toll on remittance flows to South Asia and Central Asia.

The World Bank paints a pretty picture for the OPEC countries as it projects a stable increase in the crude oil prices. But, these figures should be treated with caution as other investment banks (e.g. Goldman Sachs) predict lower oil prices amid recent US shale surge. OPEC’s historic “November Deal- to curb oil production to pump up prices” had a sizeable impact on the market this year. But, players outside of the deal often disrupt the equilibrium- USA, Libya, Nigeria etc. to name a few.

Any country that exports labor force should do so maintaining a diversified range of migration destinations- to ensure a more sustainable and consistent flow of remittance, just like portfolio management- it reduces risks. Bangladesh has been able to accomplish this to some extent. With KSA, USA, UAE, Malaysia, Kuwait, UK and Oman leading the way, there are more than 30 countries from which Bangladesh receives a sizable amount of remittances.

When people talk about remittance in context of Bangladesh, they paint a picture of the GCC (or simply middle-Eastern) countries in their mind. Bangladesh may have a diversified portfolio of countries where it exports labor, but in the end the majority of the remittance earning comes from a single region- Arab states of the Persian Gulf (as seen in the tree map below).

The remittance money that Bangladesh receives from KSA is almost 7 times the amount it receives from Qatar. But in 2015, more Bangladeshis went to Qatar than they did to Saudi Arabia- mainly due to ongoing construction of infrastructure projects ahead of the 2022 World Cup that will be hosted by Doha. Due to this reason, remittances from Qatar has witnessed a sharp uptick, even when the global remittances had been decreasing.

KSA has been imposing restrictions on Qatar- urging its allies to sever ties with Qatar as well. So, if Bangladesh is put in a diplomatic “with us or against us” situation by the Saudis- it’ll be facing a very difficult problem.

Bangladesh economy heavily depends on remittance flow for ensuring stability in maintaining balance of payment conditions. Since a significant number of emigrant workers come from rural areas, the vitality of the rural economy is critically dependent on remittance flow. 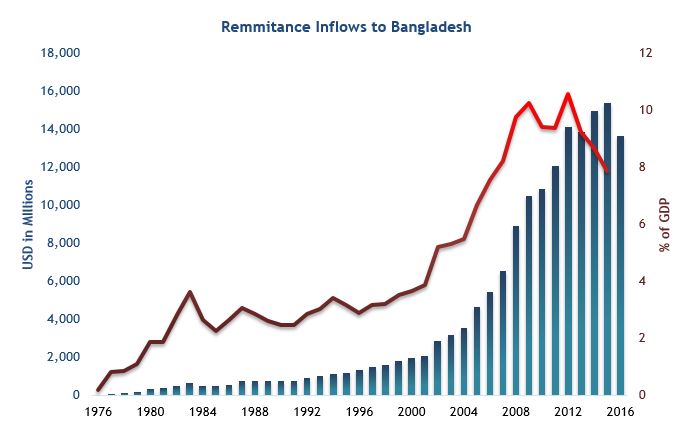 At the turn of the millennium, the workforce export pick up- resulting in higher remittance inflow. Gradually, it became an instrumental part of Bangladesh’s economy. For the last decade or so, remittance has accounted for roughly eight percent of Bangladesh’s GDP.

While some economists argue that remittance is often bad for a country’s long-term growth, none can deny the effectiveness of it in reducing poverty. In developing nations, recipient households generally have higher levels of consumer spending and lower incidences of extreme poverty than their counterparts, who do not receive remittances. Recipient families are also more likely to spend on education, and healthcare. The consumption expenses of recipient households positively impact, via multiplier effects, the domestic labor force market and incomes of non- recipient households too. The reason why remittance is such a powerful anti-poverty force in developing countries is that- unlike other publicly funded social safety nets, remittance recipients can identify their own greatest needs and can allocate the remittance income accordingly.

Recent trend of decreasing remittances has worried the policymakers, which apart from RMG export, contributes significantly to the country’s export basket. In the recipient families, a sense of dependency has developed on their relatives who toil in a foreign land. The declining trend of remittance flow is already being felt, as average household rural income has already declined by 1-2%, according to a recent research by Centre for Policy Dialogue (CPD), a Dhaka based think tank. 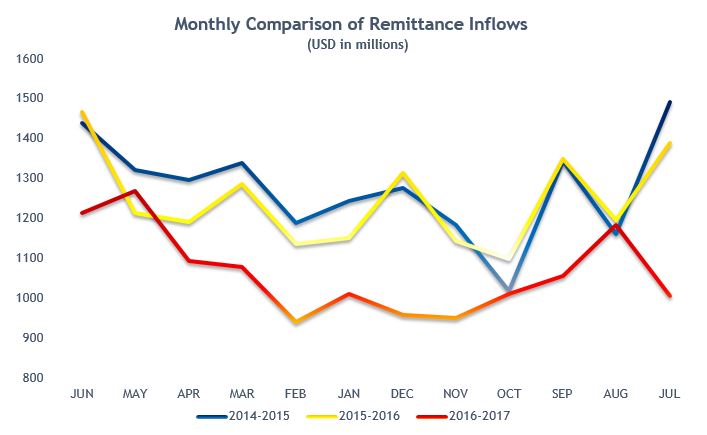