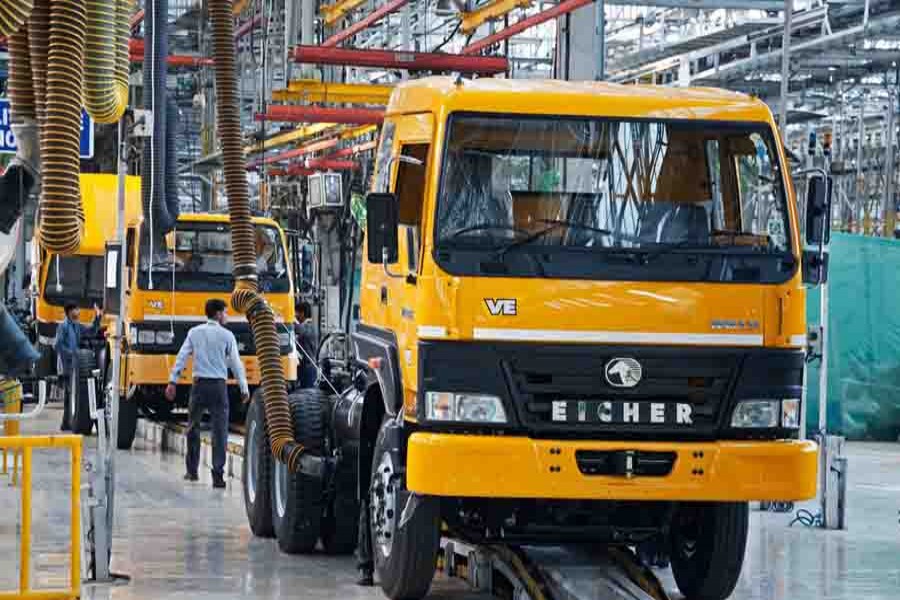 Transport is one of the most crucial aspects of the business world. Without it, businesses would be unable to access raw materials, markets with spare capacity, or suitable factory locations. The ability to expand operations beyond a firm’s immediate location is crucial to its growth and hence the growth of the economy.

The commercial vehicle market refers to vehicles used to transport goods and passengers or provide a service, and it includes trucks, buses, and coaches. Road transport is the most popular form of commercial transport in Bangladesh, carrying 70% of passengers and cargo [1]. It is significantly cheaper and easier to access than water, air, or rail transport. The commercial vehicle market was valued at around $500 million in 2017, with an estimated CAGR of 12.5% [2]. This high growth is likely to be sustained in the future due to rising regional trade, a booming economy that is feeding greater urbanization and industrialization, and road network expansion. While it is currently dependent on imports, steps are being taken to shift the industry to local manufacturing.

Regional Powers are Investing in Bangladesh

The global commercial vehicle market was valued at $1.32 trillion in 2017 and is forecasted to grow at a CAGR of 7.1% [3]. On average, growth has stagnated in developed economies but is higher in emerging ones. The Asia Pacific market is set to experience the highest growth rate globally due to the growth of mega-economies China and India [3]. Current trends include rising digital integration with features such as traffic data and weather reports and the development of electric vehicles. Telematics and fleet-sharing may reduce the dependence of the industry on the global economy and its growth as it moves beyond basic goods transport. This means that the market will be driven by different elements, such as innovation and technological integration.

Regional trade treaties formed by organizations such as BIMSTEC, BCIM, and SAARC increase the need for transport of goods between the countries as the removal of barriers boosts trade. As they are close in proximity, road transport tends to be the feasible option. Moreover, Bangladesh acts as an intersection point between many of these countries and international trade corridors, making its location geo-strategically significant as a transport hub. A crucial international development will be that of the Belt and Road Initiative by the Chinese government. It is an ambitious plan of road, rail, and sea routes involving 72 countries [8]. It will link Bangladesh directly to China by land, increasing its linkage to other major economies in the world.

The Bangladesh commercial vehicle industry remains dependent on imports from Asian countries –  specifically India, Japan, and China. This includes both reconditioned and new vehicles. India is the 6th largest automobile manufacturer in the world, and Bangladesh is its 5th largest automotive market [4]. Indian manufacturers are moving quickly to establish plants and contracts in the Bangladeshi market, capitalizing on their easy access to the market due to proximity.

The most crucial demand driver for the commercial vehicle market is the economic growth of businesses, especially the manufacturing sector, which directly impacts business confidence and thus usage of transport by businesses. It allows businesses to have the resources and confidence to invest in a vehicle as they know it will be backed up by sales. Demand for transport is thus derived demand from the demand for goods and services.

Another cause for the boost in the purchase of cargo vehicles has been a new axle load policy that limits the weight carried by each truck to reduce damage to roads. This has increased the number of vehicles needed by businesses. 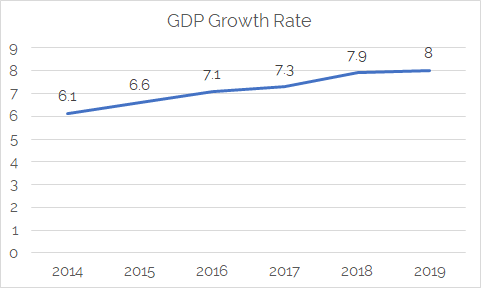 As the industry’s growth is linked directly to the global economy’s performance, fears of an upcoming recession may dampen business confidence and demand for commercial vehicles. Industry experts are predicting a recession will hit by 2021 in the US, which may impact Bangladesh’s exports and economic growth directly [7]. Moreover, as the country is due to become a middle-income country by 2021, this growth rate may decelerate. Pro-business reforms and focus on the Sustainable Development Goals will be necessary to provide the commercial vehicle market with infrastructural support.

Improving Infrastructure is a Priority for the Future

Without appropriate roads and transportation facilities, the industry’s growth is limited. Supportive infrastructure gives businesses the confidence to invest in vehicles and expand their operations as there are shorter lead times for receiving or delivering products, allowing more efficient operation. The congestion in Dhaka alone costs the country over $4 million annually [10].

The government has been developing the infrastructure of the country’s roads, ports, and bridges through regular maintenance as well as taking on new mega projects which are connecting previously isolated regions into the transport network. These increase the usage of commercial vehicles by not only increasing connectivity and ease of transport but also requiring the transport of raw materials during construction. Notable megaprojects include the Padma Multipurpose Bridge, the Payra Deep Sea Port, and the Karnaphuli River Tunnel. The Padma Bridge is expected to increase the GDP by 1.2 percentage points [6]. The Payra Port will increase demand for local road transport as regional trade will increase, and the cargo will need to be brought to Dhaka and other cities throughout the country. The Karnaphuli Tunnel will connect southeastern Bangladesh to the Asian Highway Network. These will mainly impact the demand for heavy vehicles, such as trucks.

The road network is constantly being expanded and repaired. In 2017, the government repaired highways of 1,595 kilometers in length [1]. Plans for the future include upgrading all national highways to 4/6 lanes and digitization of the Roads and Highways Department’s activities, which will increase efficiency and accountability [3]. Despite this, a major challenge for the market is the condition of roads and congestion. Only 40% of roads in Bangladesh are considered to be of ‘good’ condition [5]. On top of that, the number of metro vehicles increased 16 times between 2001 and 2013 [1]. This high congestion increases the maintenance costs of vehicles and the time taken to transport. Light commercial vehicles (LCVs), which weigh less than six tonnes, are becoming increasingly popular as they make it easier to park, access narrow roads, and evade traffic – all increasing accessibility and time and money saved [1]. Globally LCVs account for 75% of the commercial vehicle market revenue [5]. The Bangladeshi market can focus on them to deal with these issues as well.

The market for commercial vehicles is oligopolistic in nature, with high capital investment and regulation under the BRTC. The market leader is Nitol Motors Limited, with a market share of 40%, closely followed by IFAD Autos with 38%. Runner Motors Limited is also a significant player with a share of 10% and is due to open its own assembly plant later this year. The dominance of these three companies over 88% of the market limits the buying power of consumers. 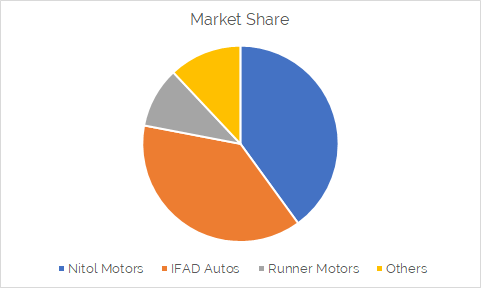 Most companies have contracts as exclusive dealers for renowned Indian and Japanese brands. Distribution networks and credit facilities are crucial for the market.  Both IFAD and Nitol are investing in new plants, and IFAD’s assembly plant is due to be the largest automobile plant in Bangladesh, with the capacity to build 4,000 trucks and buses annually [5]. Both of these plants will be built in collaboration with the relative brands they distribute in Bangladesh.

However, the double role of the manufacturers as credit providers is also the biggest challenge facing the industry. Once the vehicle is acquired on credit terms, it is possible for the purchaser to evade payment, often by stating a lack of funds due to poor revenue. The process of communicating a customer who is evading such communication can become too costly to be profitable, resulting in bad debts. Thus a predicament is created where sales are high, but cash flow is poor. 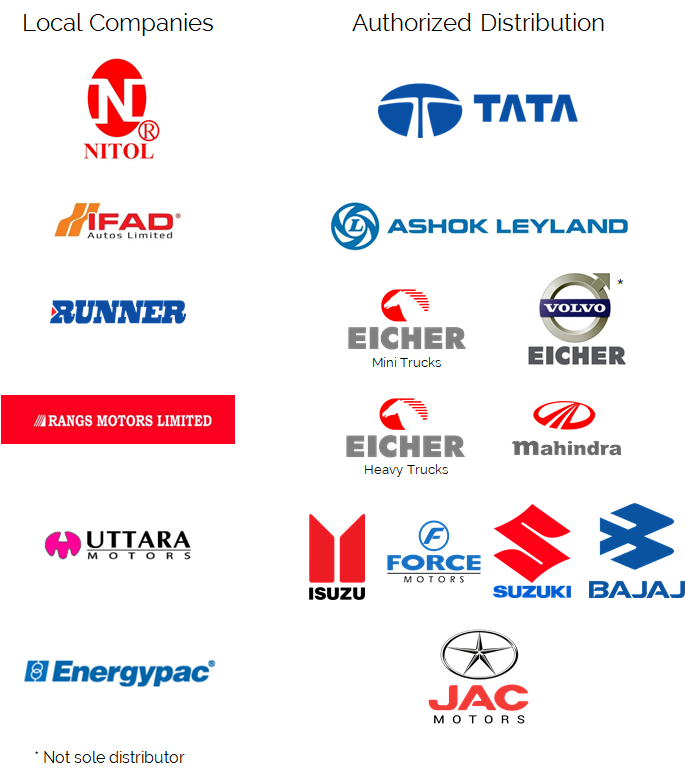 The commercial vehicle market is growing as the capacity of the Bangladeshi economy grows. The government is developing supply-side policies by improving infrastructure, which will provide support to all industries and increase the need for local transport. The development of megaprojects and the Belt and Road Initiative will allow businesses to access new markets and expand operations, putting demand pressure on companies to build assembly plants.

Like most of the Bangladeshi automobile industry, the supply of the market is limited by the lack of raw materials and backward linkage. Its dependence on imports creates an upper limit for the industry’s size. The market must shift from Complete Built-Up (CBU) to Complete Knocked-Down (CKD) vehicles, which will be more affordable in terms of import duties and will incorporate local materials for tires, windows, etc.

The growth of this sector can be accelerated if proper government initiatives are taken to increase the building of such plants, as well as support ancillary industries relying on the commercial vehicle industry, such as the spare parts industry and the tire industry. Incentives given to increase production include infrastructural changes and ease of obtaining construction permits. The placement of higher taxes on imported vehicles and the development of the Kishoreganj Economic Zone under the Nitol-Niloy Group are recent steps in the right direction [5].