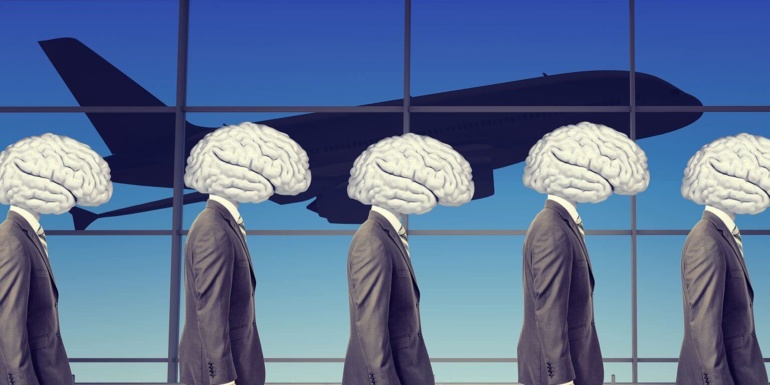 “Brain drain” refers to the flight of human capital from developing countries to developed countries in the search for better opportunities and futures. Often, poor conditions in the home country such as war or political instability are also to blame, which is the case particularly in the Middle East. Genocide, discrimination, and disease have also led to large waves of emigration.

It is common in the Less Developed Countries (LDCs), meaning Bangladesh also suffers from it. Around 82% of young people aged 15-29 expressed their desire to leave the country in a survey by the World Economic Forum. Over 1 million people emigrated from Bangladesh in 2017 alone.[1] Approximately 10 million people of Bangladeshi origin living abroad, of whom 2.4 million are permanent migrants.[2] This makes Bangladesh the 5th country with the most emigrants.[3]

Brain drain essentially limits a country’s capacity for growth as intellectuals and skilled workers leave. Expertise and knowledge in crucial sectors, like healthcare, technology, and research, are lost with the exodus and the advancement of these fields is stunted. The economic benefit these individuals would have offered in the home country is also lost.

The Bangladeshi diaspora is the global community of people of Bangladeshi origin and heritage living around the globe. There are significant migrant communities in the US, the UK, and Canada.

A major reason for the high number of migrants in the USA is the Green Card Lottery system that awards 50,000 visas to skilled and educated workers from specific countries. However, as of 2012, Bangladesh is no longer eligible for it as over 50,000 people of Bangladeshi origin have migrated to the United States.

The graph above excludes the Middle Eastern nations and Malaysia as the Bangladeshis there are mainly for temporary employment services and unable to immigrate permanently.

Studying abroad is increasingly viewed as a pathway to a better life for Bangladeshi students at the tertiary level.

Many developed countries have universities that offer attractive scholarships or financial aid. Those who do not get access to funding have to finance it themselves, meaning both money and talent leave the country. Most of these students belong to the postgraduate and doctorate levels. Bangladeshi students pay an average of $400 million annually on foreign education.[4]

A major reason for this exodus of students is the fact that Bangladeshi tertiary education institutes do not match up to their international counterparts. Moreover, political unrest on the campuses of these universities causes concerns about safety.

Finally, there is no guarantee of employment in Bangladesh even after graduating from the best public universities. BUET, the Bangladesh University of Engineering and Technology, is the highest internationally ranked university in the country, with a QS Global World Ranking in the range of 801-1000, and Asian University Ranking of 207.[7] However, hundreds of its engineers are unable to find jobs locally and are forced to go abroad to find employment each year. Only 39% of university graduates in Bangladesh are employed in either part or full-time jobs.[8] As STEM students find that their institutes cannot provide a quality education, and that job prospects are not optimal, they may choose to go abroad instead.

Approximately 24% of the jobs in the ready-made garments (RMG) sector, which is Bangladesh’s best performing sector in terms of GDP and exports, belong to foreign nationals.[4] Most of these positions are of the top management level. Despite this, Bangladeshis are leaving the country to strive for the same jobs abroad.

It is not just students leaving the country. Over 43% of the workers who left the country in 2018 were skilled or professionals in their fields.[5]

The healthcare industry is one that feels the effects of brain drain more acutely. Healthcare professionals, including both doctors and nurses, find that while their degrees are difficult and intensive to acquire, it is not as easy to find well-paying jobs within the country. They may choose to go abroad, but some countries do not accept the Bangladeshi MBBS and those students have to repeat their medical education to get a license. Moreover, foreign healthcare is generally preferred for long-term medical treatments, due to a perception of better and safer service. This is also discouraging to local healthcare professionals and pushes them to leave.

The technology and information sector are also industries where brain drain is a significant trend. Not only do developed countries have more advanced and growing technology markets, but they also offer relevant training and education programs. As a result, a prospective software engineer or data analyst sees a much brighter and valuable future abroad than in a country like Bangladesh, where the Fourth Industrial Revolution is just starting to take hold and that too among significant challenges.

Brain Gain and the Way Forward

Brain drain hurts the economy through the loss of skilled workers who could have contributed to the economy and generated business. Moreover, this skill and expertise gap is then financed by foreign professionals or external support, which is costly.

An alternate, counter-effect has been identified as brain gain. This is said to occur when migrants return to their home country after acquiring knowledge, skills, and experience abroad. These returned migrants enjoy better opportunities in their home country while being able to make a difference and contribute their expertise. This gives a positive perspective of the emigration of workers as they are expected to return with useful resources and as more developed human capital.

Several developing countries around the world have taken initiatives to convert brain drain into brain gain, such as subsidized housing and education in Taiwan and tax waivers in China.[6] The Indian government focused on the return of software engineers and IT professionals by promoting favourable policies for the sector as well as developing Bangalore as “Asia’s Silicon Valley”. The steps taken by India and China were necessary to sustain their large economies and growth, which requires skilled professionals and experts.

Bangladesh currently has very limited policies to encourage brain gain, an example of which is the offering of dual citizenship for those migrants who do not want to lose their foreign passport. Additional policies such as sponsoring migration costs or facilitating their rehabilitation should be introduced. In addition to encouraging brain gain, the government can take initiatives to prevent brain drain in the first place. A major issue to address here is the quality of education, which needs to be improved. Improving conditions for specific industries, such as the medical field or technology, will also encourage the growth of these crucial sectors.

It is difficult for a country to grow without its people and the loss of Bangladesh’s most learned and capable intellectuals should be something of great concern. As a future in Europe or America appears to most as the ideal life, Bangladesh must address the issues that mark the difference in the standard of living in a more long-term transformation. This cannot simply be done through economic growth, however. Improvement of infrastructure, education, the financial sector, and environmental protection are some of the many fields that need to be addressed.