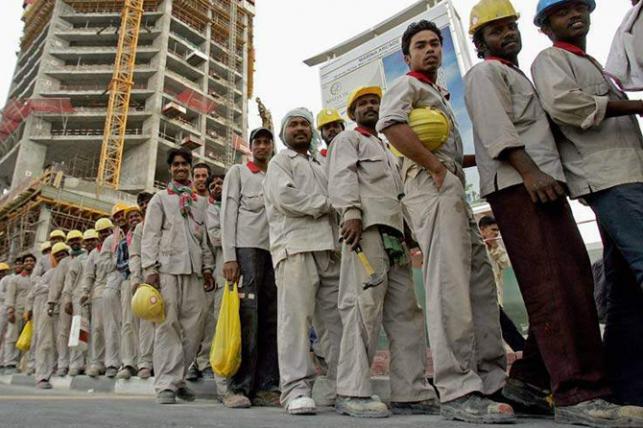 About 77% of the total remittance earnings come from the Gulf Countries which include Kingdom of Saudi Arabia (KSA), UAE, Qatar, Oman, Bahrain and Kuwait.[2] This indicates that the Bangladesh economy is highly dependant on these countries to sustain its foreign earnings. Thus, if remittance inflow from these countries decline for any reason, it will cause a significant blow in the Bangladesh economy.

Though a large portion of Bangladeshi laborers are unskilled/semi-skilled, the number of skilled workers have recently been on the rise.[1] The major competitors of Bangladesh in the foreign labor market include India, Sri Lanka, and the Philippines.[3]

Despite the fact that that the foreign labor market is a major driver in the economy of Bangladesh, some significant issues are plaguing it.

Mistreatment of laborers in Gulf Countries:  Bangladeshi labourers in the Gulf Countries have regularly been victims of exploitation and mistreatment by their employers. On interview of 110 returnees, it was found that 86% did not receive their full salaries, 61% were physically abused, 24% were deprived of food and 14% were sexually abused by their employers.[5] According to BRAC, 1,353 female workers came back to Bangladesh from Saudi Arabia in 2018 citing inhumane working.[6]

A major culprit in the exploitation of Bangladeshi workers in the Gulf Countries is the Kafala System which enables employers to sponsor the visas of immigrant workers in exchange for taking away their ability to bargain wages.[7] While Qatar has banned this system in 2019, it is still in practice in the other Gulf Cooperation Council (GCC) countries. Apart from the GCC countries, Jordan and Lebanon also practice this system.[8]

At the mercy of the Gulf Countries: Given Bangladesh’s high dependency on Gulf countries for the majority of remittance earnings, the country has little bargaining power when it comes to protecting the rights of its workers. Moreover, Bangladesh is at the mercy of the regulators of these countries to allow Bangladeshi workers. For example, the UAE has banned Bangladeshi labourers since 2012.[9] Kuwait had also banned Bangladeshi workers from the year 2006 to 2014. Another ban on VISA 20 or the Visa for domestic servant was imposed in the year 2018.[10] Moreover, Saudi Arabia, the biggest destination for Bangladeshi workers has enforced a Saudization policy which looks to reduce its dependence on foreign workers.[11] Bangladesh’s only resort against these regulations and policies are confined to requesting the respective governments to lift them.

Illegal Labor Trafficking By Man Power Businesses (Adom Bepari): A significant portion of the migrant workforce gain work-permits and other documents through illegal sub-agents (dalals) or intermediaries.[12] These often lead them to use illegal and potentially dangerous channels of migration.[13] In fact, only 10% of Bangladeshi workers migrate through formal channels which leads to them falling victims to fraudulent middlemen and exploitative employers, leading to loss of their lifetime savings and assets while facing harassment, abuse and imprisonment.[14] Migrant workers resort to these channels because the official channels are more expensive and there is no scope of migration on a regular basis.[12]

Uncoordinated Skill Development Institutions: While Bangladesh has a sizeable number of skill development institutions, they are not well-coordinated. This raises questions on the quality of the certificates they provide and their students often do not gain the required skills.[15]

Shifting Pattern among the Migrant Workers

Migrant workers are classified into four categories: Professionals (doctors, engineers, nurses, teachers etc), Skilled (garments workers, manufacturing workers, electricians etc), semi-skilled (tailor, mason etc) and unskilled (housemaids, cleaners, labourers etc).[16] Historically, the percentage of unskilled workers have always been higher than skilled workers. However, this scenario has changed recently. As of 2018, 43.25% of the workers were skilled as opposed to 38.55% unskilled.

This is a very encouraging trend because it will help Bangladesh concentrate on countries outside the Gulf since there is a demand for skilled workers all over the world. Historically, Bangladesh has been lagging behind its competitors due to a lack of skilled workforce. As of 2018, for every $100 earned by a Bangladeshi worker, an Indian worker would earn $200 and a Sri Lankan would earn $300.[18]

The demand for skilled workers is increasing in other parts of the world as well. Japan will take 334,000 workers in the next five years from eight countries including Bangladesh.[19] To compete with the other seven countries and make full use of this opportunity, Bangladesh will have to increase its supply of skilled workers.

Europe is facing a demographic decline which will result in its working population to drop by 10% or 1.9 million by 2020. Currently, India is looking to fill up that gap, mainly, with their huge force of IT skilled workers.[20]  The Bangladesh IT sector is growing and is expected to reach around 4.8 billion USD by 2025.[21] Thus, Bangladesh can also look to take a bite out of this market in Europe.

Germany has passed a law on June 2019 to allow skilled migrants in the country. The federal government of Germany predicts that this law will bring in 25,000 skilled workers to Germany every year.[22]

While Bangladesh has been reaping the benefits of the remittances of the unskilled and semi-skilled labourers, it is now time to take the next step and enter the market of skilled workers.  While countries like India and the Philippines have already made strides in the skilled labour market, it is not necessarily a disadvantage for Bangladesh. Bangladesh can use their cases as models to build its own infrastructure to fulfill the demand for skilled labour in the world.

To develop skilled workers, it is necessary for the population all over the country to have access to training centers. This will require activities from both Public and Private organizations. However, Bangladesh Technical Education Board (BTEB) and Bureau of Manpower, Employment and Training (BMET) should have centralized control over the content of the courses to ensure they meet the international requirements.