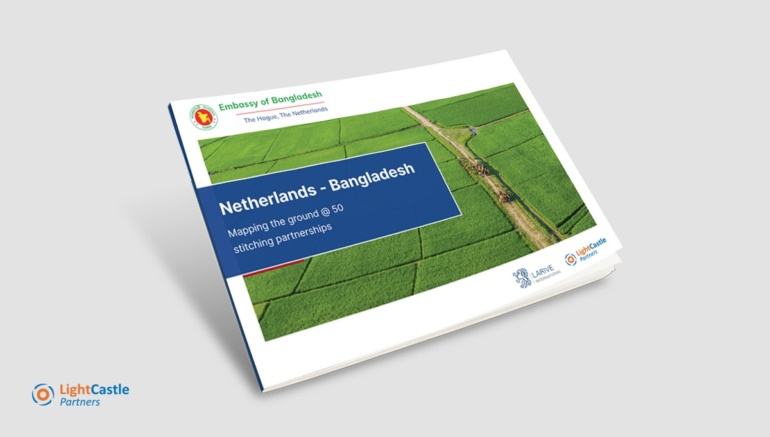 Bangladesh and the Netherlands have bolstered their diplomatic and economic ties, since recognition (of Bangladesh by Netherlands) in 1972. The Netherlands has been one of Bangladesh’s key development partners since Independence, and the relationship is strengthening so far to increase the economic engagements between these two maritime nations. This report, conceived by the Bangladesh Embassy in Netherlands and produced in cooperation between LightCastle Partners and Larive International (Zeist), maps the evolution of the relationship between the two deltaic nations and outlines economic engagements in sectors, such as Water and Ready-Made Garments(RMG). Given the macroeconomic stability, demographic dividend, and geopolitical advantage, Bangladesh is in an advantageous position to strengthen economic ties with its long-standing diplomatic partner. At the same time, given Netherlands’ expertise in water management, agriculture technology, and financial technology, stronger Bangladesh-Dutch Bangladesh economic relationships would be a win-win situation for both countries. The report highlights the recent achievements of some of Bangladesh’s most robust sectors, e.g., Agriculture, RMG, Leather, Livestock and pinpoints potential sector-wise areas for greater Bangladesh-Dutch co-operation.